Why Allsop created the giant toy costumes for Ikea’s "Playin With My Friends" spot by Mother.

How Allsop says: "As ever, the biggest challenge was the timeframe. With specialist costumes, nothing can be hired, so everything has to be purpose-built.

Also, there was no time to design a mechanism for the clockwork key in the robot, so I ended up buying a rechargeable drill and rigging that to the costume." 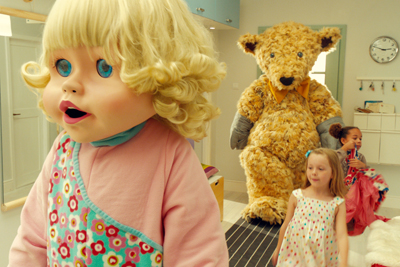 How did you get into costume design? I studied theatre design, specialising in costume, though I would now consider myself to be more of a specialist maker who sometimes is asked to design.

What projects are you most proud of? The work we did on the recent Dredd 3D film. We collaborated with the costume designer Michael O’Connor to develop the look of the leading characters, then made their final costumes in my workshop. I am also pleased to have been working closely with Alexandra Byrne on 300: Rise Of An Empire.

Are there any costumes you particularly enjoy working on? Costumes with a bit of a wow factor that completely transform the wearer. Some of my work on Dr Who would fall into this category: space suits, robots, space troopers – that sort of thing.

What inspires you? It is always inspiring to work with a designer or director who has great ideas. Sometimes it is good to avoid the obvious; when designing the handbots for Dr Who, I looked at fashion references rather than other robots. But sometimes the obvious solution is what is required, particularly in some ads where you have seconds to get an idea across.

What does the future hold? At present, we are working on a huge production of The Magic Flute for the Bregenz opera festival in Austria next July. It’s an amazing venue, featured in the James Bond film Quantum Of Solace.