The Stronger In campaign should have presented a vote to Leave as imposing a disadvantage on your genetic offspring, says the president of The Engine Group.

Much has been written to explain the Leave victory, or how it could have been avoided.

But none of these get to the heart of the matter, as they fail to recognise how genes drive decision making – and drove this decision.

It was, surprisingly, The Times' restaurant correspondent, Giles Coren, who revealed the genetic argument that the Stronger In campaign should have used.

He reported a conversation with his mother last Wednesday. She asked him how he would vote on the following day. Giles Coren was somewhat surprised by this and asked his mother why she was asking. "I’m asking because whatever you vote, I’ll vote" she said "After all, I’m going to be dead soon so it doesn’t matter what I think. I won’t be affected."

So the potential argument was clear. Our biological programme drives us to pass on our genes to our successors. If Stronger In had presented a vote to Leave as imposing a disadvantage on your genes expressed in your children, it would have been responded to in a way that the Project Fear proposition did not generate.

But this genetic argument was never deployed. This is how it could have been expressed. 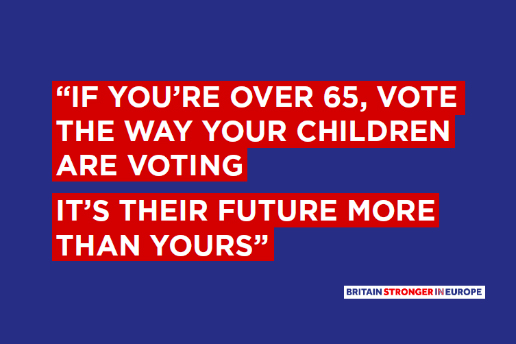 This goes a lot further than David Cameron’s "Think of your children". It includes a behavioural mechanic that would have made genetic sense – albeit unconsciously – to millions of pensioners planning to vote Leave.

Could this have been worth the extra 650,000 Stronger In needed to draw level with Leave?

Probably. If only one Leave voter in 26 had had his or her behaviour shifted by this genetic argument the result would have been a tie. And a greater impact of this genetic message would have made it a Stronger In victory.

Reframing the choice as one where one’s own preferences should be sacrificed to the preferences of your genetic successors – your own children – would have been more powerful than Project Fear.

I believe this genetic argument would have been strong enough to combat the genetic counter argument influencing the white working class who feared for the survival of their own genes as they lost a "survival of the fittest" argument to the superior genes arriving from abroad.

It will always be the most genetically well-equipped who succeed in an immigrant adventure.

One reason for the success of the United States is that those who fought their way there were the most genetically successful of their home communities – it was always the smartest and bravest ones who left home.

This was more than a vote for Brexit, it was a desperate attempt to survive.

But nobody made the genetic counter argument on behalf of Stronger In – expressed as supporting your children’s choice over your own personal preferences.

Now to heal our wounded country we must recognise what really drove these white working class Leave voters.

As Nicky Morgan has said, we must listen to their cry.

And I certainly believe that this genetic analysis shows it was immigration rather than democracy that was the guiding force for their voting behaviour.

However, rather like a bad brief from a client, we must now use our British creativity to turn this disruption into success, now we can really understand where it is coming from and what powers it.

This is not the first time in British history that a disaster has preceded a triumph – it is almost a British speciality. If the Brexit vote can be seen as a Dunkirk – as markets crash – then we& have the creative spirit to win a final victory on behalf of all our citizens.

But we must first learn to understand what drove the people who made this choice. As Churchill did in his day.

And whoever understands this best should become our next prime minster.