With many international sports bodies and events hit by scandal or under suspicion, this year's Rugby World Cup presents a tidy opportunity for sponsors, writes Shona Ghosh

If we were in football, we wouldn’t be happy

Rugby, as the received wisdom goes, is a thug’s game played by gentlemen. Players risk spinal injuries, broken bones and, of course, cauliflower ear. Why would big-name brands get involved with one of the more aggressive sports?

As the Rugby World Cup approaches, there are plenty of reasons, it turns out.

The FIFA World Cup, which did so much to boost brands like Adidas during last summer’s tournament, has been tarnished by multiple corruption investigations by US and Swiss authorities in recent months. There’s also the continued exposés of human-rights abuses suffered by migrant workers in Qatar during construction work for the 2022 World Cup.

Match- and spot-fixing also dog that other gentleman’s game, cricket. The sport’s governing body has its own anti-corruption arm, whose chief compared criminals luring cricketers into illegal activity to "paedophiles". Even the Olympics has been affected: China has just fired a senior sports official amid a corruption probe into Beijing’s successful bid for the 2022 Winter Games.

For such a mucky game, rugby remains comparatively clean, marred occasionally by bad behaviour from individual players, often alcohol-related, rather than corruption.

O2 has partnered the England Rugby team for the past 20 years, and the brand’s head of sports sponsorship, Gareth Griffiths, believes it’s the best deal of its kind in the country.

"The reason we’re so proud to partner with England Rugby is the values that [the sport’s governing body] the RFU and [head coach] Stuart Lancaster have. We have very high standards we expect of them. If we were in football, we wouldn’t be happy," he says. 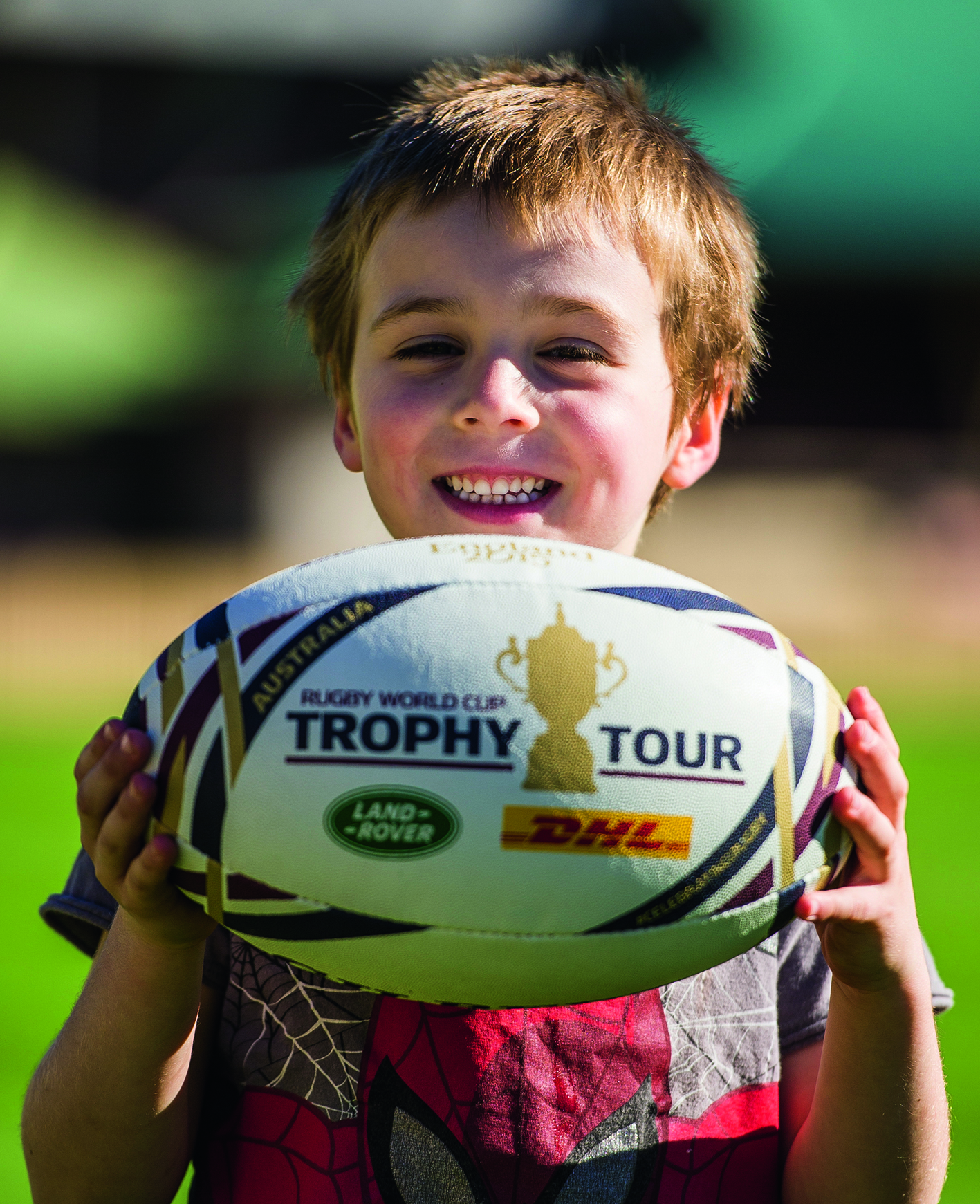 The game’s clean reputation has an effect on and off the pitch that attracts brands, according to Steve Martin, chief executive of M&C Saatchi Sport and Entertainment.

"The opportunity is in the social side – rugby is played in a very good, respectful way," he says. "The values of rugby are very strong and, as a result, there’s quite a positive response in the sponsorship market."

Martin points to the unifying tribalism within rugby, which knits disparate fans together while lacking the "angst" of football club rivalries. For one thing, visiting fans don’t need to be segregated from home attendees.

That’s an important factor for MasterCard, which has a top-tier sponsorship slot for the Rugby World Cup.

Rugby’s ‘cleanness’ also increases the sport’s appeal to women and families, which is another plus for sponsors.

In addition, with the price of football rights continually creeping up, rugby offers a credible alternative for a brand seeking a strong headline sponsorship.

The Rugby World Cup claims to be the third-biggest global sporting event, behind the Olympics and FIFA World Cup, and a top-tier sponsorship slot costs about £6.45m, according to sports data consultancy IMR. By contrast, 2014 FIFA World Cup sponsors were paying up to £16m.

The price is dictated by the market so sponsors have to be smart about how they activate. The beauty is that the rights don’t eat up all the marketing budget

O2’s Griffiths explains: "We used to be an Arsenal FC sponsor, but it got quite expensive in football. We’re about being the lead sponsor, and you can’t take the shirt of the England football team. So being on the England Rugby shirt is important to us."

Coca-Cola, which is an official tournament partner of the Rugby World Cup, has focused its sponsorship activation on its no-sugar Coke Zero product.

"Sponsorship of any major event is the subject of rigorous scrutiny in terms of return on investment," says Coca-Cola GB’s marketing director, Bobby Brittain.

"I’m happy to say the Rugby World Cup comes up to scratch, and the way we are able to associate Coke Zero [with the sport] represents a huge opportunity."

There’s a reason it’s relatively cheap, however, as M&C Saatchi’s Martin notes. "There are not 180 countries involved, and it’s a much smaller demographic. The price is dictated by the market so sponsors have to be smart about how they activate. The beauty is that the rights don’t eat up all the marketing budget."

Brett Gosper, chief executive of World Rugby, which organises the Rugby World Cup, has been quick to trumpet how much money the tournament will bring to the UK, claiming commercial activity, including hospitality, will contribute about £250m.

The breadth of appeal of the host cities will have a massive impact.

For a game that has become commercialised only in the past 20 years, and which prides itself on sportsmanship and camaraderie, that seems a little crass. However, the RFU argues that the sport isn’t selling out – more money simply means a better customer experience for fans.

Perhaps that’s true, but the ultimate test will lie in the World Cup’s legacy. Much was expected of the London 2012 Olympic Games in boosting mass-participation in sport. Yet the UK government has just launched a consultation to find out why a post-Olympics high in sports is now on the wane.

Most of the promises previously made in relation to grass-roots sports have been "incredibly disappointing", argues Martin.

Coca-Cola has taken on the challenge of boosting mass-participation in rugby, running rugby-inspired activities (not all contact sports) in six cities as part of its marketing build-up to the tournament. For the country as a whole, the Rugby World Cup also has one key advantage over the Olympics: it’s hosted across multiple cities, from Exeter to Newcastle.

As Brittain neatly sums it up: "There’s the geographical diversity of the host cities, and that breadth of appeal will have a massive impact, along with the fact that there’s plenty of time to catch a game either live or on TV." 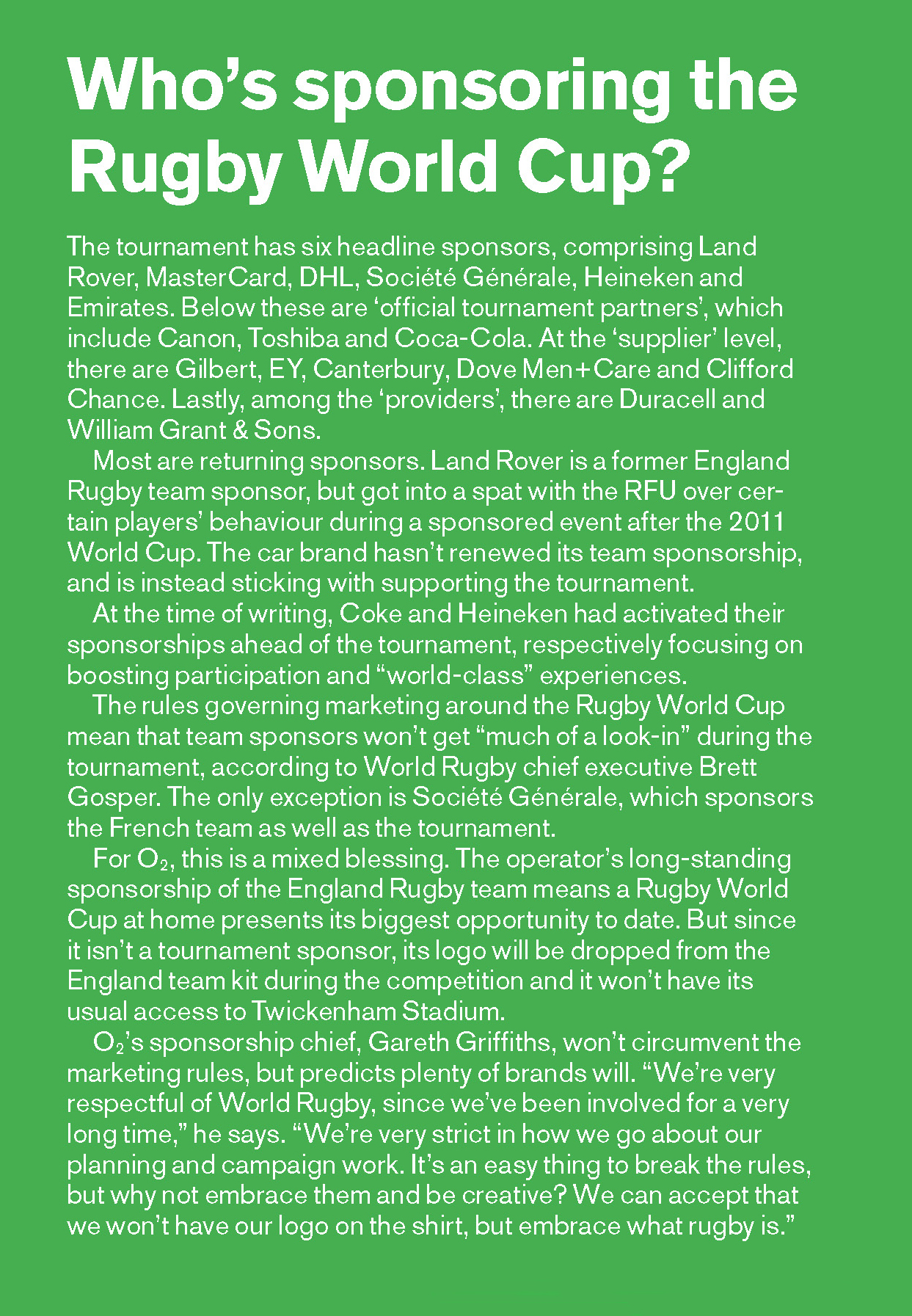