Lawrence Dallaglio, the former England rugby union captain, tells Danny Rogers how BBH Sport plans to keep the Rugby World Cup marketing effort running for six weeks, and why learning to speak with an authentic voice to fans will enable the agency to branch out into other sports once the tournament has ended.

‘‘Rugby kind of got in the way of Lol’s acting career," quips Ben Fennell, chief executive of Bartle Bogle Hegarty, following my interview with Lawrence Dallaglio.

Fennell, who is one of Dallaglio’s oldest mates and now a fellow director of BBH Sport, is referring to the slick new Samsung campaign, in which Dallaglio stars alongside his former England captain Martin Johnson and the comedian Jack Whitehall. The campaign, which was created by BBH Sport and went live last week, hinges on a series of filmed vignettes called ‘Samsung School of Rugby’ in which ‘Lol’ and ‘Johnno’ try to teach Whitehall the basics of egg chasing.

Fennell’s joke is significant, not only because it plays on Dallaglio’s obvious relish in the Samsung ads – "I didn’t mean to be in our agency’s ads!," Lol insists – but also on his oft-used line that "rugby kind of got in the way of my business career". And it is clear that the six-foot-four, 17-stone Dallaglio is dead serious on this point.

The 85-times capped back-row forward is now founding partner and the main ‘suit’ for BBH Sport, which was set up 18 months ago. The mission is to take BBH’s unrivalled reputation as an advertising agency and apply it to the increasingly lucrative business of sport. Dallaglio says he is "as full time as I can be" at BBH Sport (he also runs the Dallaglio Foundation charity and has substantial duties as an ITV Rugby World Cup pundit and columnist for The Sunday Times). As well as Fennell, who is chairman of BBHSport, he works closely with the agency’s third director, the accomplished creative chief Ewan Paterson, and a dozen other staff on a range of clients from Adidas to Ladbrokes.

For now, however, BBH Sport will be best known for rugby. No surprise really, considering its management team (Fennell is also a former rugby player) and the fact that the first major client it picked up last year was England 2015 – the organiser of the Rugby World Cup, which kicks off next week.

BBH Sport’s precise brief here was to ensure that the Rugby World Cup sells all of the 2.3 million tickets to the matches over the next couple of months. "We are 97 per cent there," says Dallaglio. "But it is also our role to help ensure this is the biggest and best Rugby World Cup ever." To this end, BBH Sport created the Too Big to Miss promotional film last autumn, featuring Charles Dance who delivered ‘A Team Talk to the World’. Owing to a limited marketing budget, much of the England 2015 work relies on earned and owned media rather than advertising.

"The Rugby World Cup is still a young competition," Dallaglio stresses. "The first one was only in 1987 – I remember watching it as a kid – and at that time it attracted a live audience of only 600,000. Today, it is the third largest sporting event on the planet. But it’s still a challenge to keep the global audience engaged over six weeks of competition. Lots of things are out of our control, like the performance of the national team, but the magnificent marketing team at England 2015 will communicate this World Cup in a very English way."

‘Samsung School of Rugby’ is also part of this effort, albeit for a Korean phone maker. Last October, Samsung signed up as an official sponsor of the England rugby team and this is the first creative to emerge from that partnership. The films will air both on television and online, and be supported by print advertising.

"I strongly believe that brands play a major role in supporting the Rugby World Cup," says Dallaglio. "England sponsors like Samsung can even help create home advantage. Just look at the great British Airways campaign prior to the 2012 London Olympics [BA’s ‘Don’t Fly’ work was created by the main BBH agency]. Our Samsung campaign aims to demystify rugby, which is a complex game, and make it more digestible and accessible to both fans and non-fans."

It is certainly the first major campaign to emanate from BBH Sport and Dallaglio hopes it will establish the sports marketing arm as a creative pioneer. "We’re very proud of it," he smiles (as they should be – it is genuinely funny and set to become a viral hit). "I hope this piece of work helps define our agency."

All that said, once the Rugby World Cup circus leaves town on 31 October, Dallaglio is keen to focus on other sports. This includes working with the Lawn Tennis Association on promoting tennis and pitching for clients involved in next year’s Olympics. 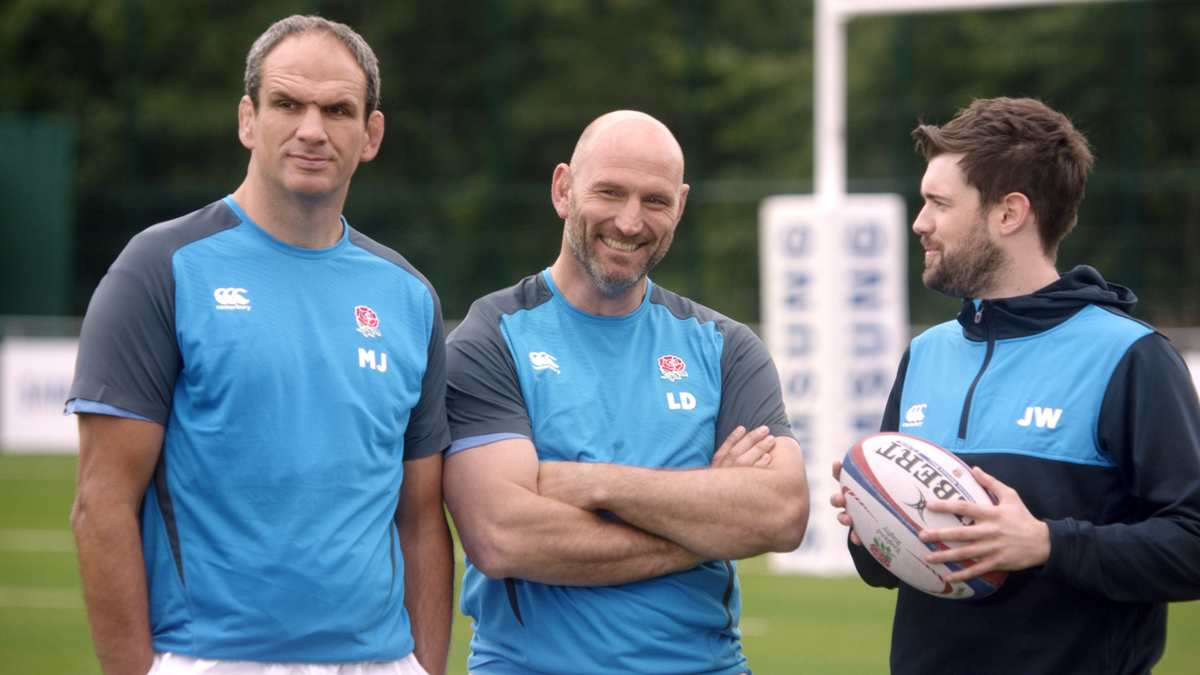 Warm up act: Whitehall, Johnson and Dallaglio star in ‘Samsung School of Rugby’

Dallaglio clearly has great ambition for BBH Sport and believes it can become a unique type of sports marketing agency. "We can combine the best thinking on brand strategy and creativity with a passion for sport," he says. "BBH has always been an ad agency that has put creativity at the heart of what it does. What BBH Sport does is bring a real understanding of sport to the brands involved. You have to be relevant and authentic. One of our beliefs is that to talk to a fan you have to behave like one. For me, it’s about using the right language at the right time."

The firm is well aware that it can create enduring content properties for its clients, intellectual value that is all too rare in the sports marketing world.

It is also apparent that Dallaglio sees himself as much more than a sporting legend and fan. He regards marketing as his chosen long-term career: "When I played rugby it was about getting results and I’m very comfortable being judged as a business on our results. ROI is very important. Our work has to deliver for the client. Inevitably, they will ask, ‘for every pound that I spend on BBH Sport, what do I get back?’’’

Dallaglio is not like most former sports stars, who tend to rest on their laurels and concentrate on punditry and after-dinner speaking. Instead, he is an intense and restless individual with an intelligent curiosity about the world. He combines this with laddish bonhomie that many clients will love. Underneath all this, however, one senses a steely impatience – almost a professional paranoia – that the best marketing agency bosses tend to possess.

The individuals that make up BBH Sport display a spirit of independence and creativity that could prove disruptive as the business inevitably grows. Fennell’s strategy for the main UK business is one of ‘connected specialisms’, of which sports marketing is just one.

"The first 18 months have been about politely introducing ourselves with an emphasis on creating great work," explains Dallaglio. "Lots of businesses fail because they get ahead of themselves. You should be known for the work you choose to do. Now we are getting on pitch lists in our own right."

BBH Sport still has the advantage of being able to ‘dial up’ services such as top creative teams, production and talent management from the main agency. But the question is whether the sports arm’s own client portfolio will eventually cause conflict problems with the ad agency’s roster. For example, would Barclays object to BBH Sport working for another bank in the sports arena?

Either way, these are nice forward problems to tackle (if you’ll excuse the pun). It is also a sign that Dallaglio will soon have got rugby well and truly out of the way of his ‘real career’.