Who run the world? Not your brand managers, sorry.

If anyone’s used to launch hype, it’s Beyoncé. But even Queen Bey might have noticed some unintended consequences around her Adidas x Ivy Park drop this week.

The thing is, Beyoncé’s collab bears an uncanny resemblance to the Sainsbury’s store uniform. And all Brits know that maroon and orange belong on the deli counter, not the catwalk. So the Sainsbury’s social team made its feelings known with this tweet, which promptly racked up 227 million Twitter impressions, 50,000 brand mentions, global news coverage and millions of pounds in Twitter media value. 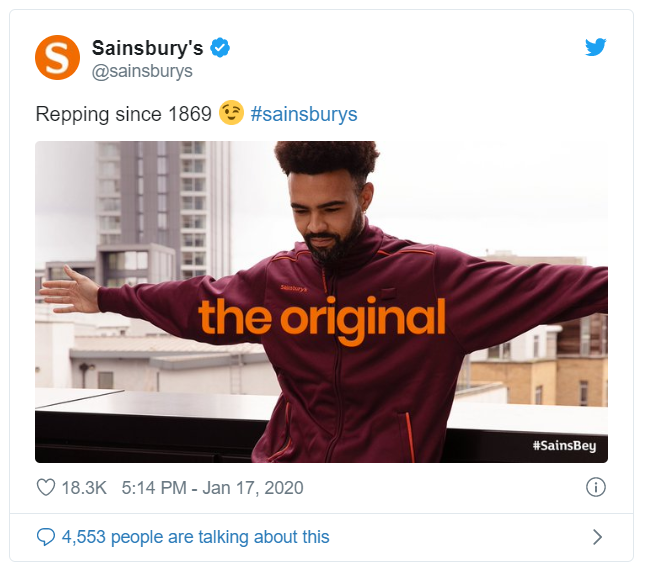 What was it about that gag that set the internet alight? I think it’s a big establishment British brand, proudly acknowledging that one of its most valuable assets is a frumpy maroon fleece. And doggedly defending it to the world’s hottest entertainment property.

I'm too scared to ask @sainsburys staff for help incase they turn out to be a random person wearing the @Beyonce new clothing collab ?? pic.twitter.com/jWtyzvDHVF

Ikea pulled a similar trick with its Balenciaga takedown, puncturing the rarefied fashion world with a blue bag.

Of course, it’s classic Byron Sharp thinking. Brands are built from distinctive assets – those consistent sensory and semantic cues that define how it is perceived. For a nation raised on Sainsbury’s, that colour combination was too distinctive to miss.

But it takes more than Byron to topple Beyoncé. In the participatory world of social, you still have brand assets – you just don’t get to choose what they are. Your audience does. Luckily, they will make their feelings known. Think it’s the Sainsbury’s logo? Wrong – it’s actually the fleece. Surely the orange 20p shopper? Maybe, but it’s really the elephants on your Bag for Life that make frequent appearances on Rihanna’s Insta Stories, for reasons unexplained.

The brands that succeed in social recognise that their brand assets are amorphous things, with fuzzy edges, controlled by the wider cultural imagination. Any brand manager who has fallen foul of a BuzzFeed "Brand logos that look like sexual organs" listicle knows what I’m talking about here.

So if you’re hunting for your real brand assets, relinquish control. Put down your brand bible and invest in a smart social listening set-up. In 2018, when a trolley tunnel in the Sainsbury’s in Bude started racking up tongue-in-cheek TripAdvisor ratings, we persuaded the brand to divert our whole Christmas brand budget to help it fly. The bet paid off, with our Christmas makeover hitting global headlines and even featuring on Have I Got News for You.

And if you need any further reason to cede control of your brand assets, look to your advocates. The #Sainsbey phenom saw a new generation of Sainsbury’s colleagues fly the maroon flag. Self-nominated bakery counter colleague #BakeryGirl drew hundreds of backers to take on Bey. TikTok was overrun with colleague mash-ups and we even spotted a fleece going on eBay (naughty).

Why is it great? Because although we industry folk hate to admit it, punters on social media are often a lot funnier than us. More power to #BakeryGirl and co – it’s their supermarket, after all.

In the world of social, Sainsbury’s most distinctive assets aren’t its font, colour or logo. They’re the purple fleece, the overlong trolley tunnel, the elephants on the Bag for Life. They’re the humblebrag of racking up your Nectar points. They’re the unexpected item in the bagging area. They’re Gaynor, the viral checkout star of Southampton Sainsbury’s.

Here’s to you, Gaynor. We think you’re a star ? pic.twitter.com/nHYo3pU7iZ

In the era of participative brand culture, you don’t get to choose your brand assets. Your only hope? Put your ear to the ground and listen.

I am... Sainsbury's: supermarket riffs on Beyonce comparison in Twitter hit

Sainsbury's CEO: We sold 34 million oranges off back of Christmas ad

Sainsbury's travels back to Victorian London to tell myth about Santa