Country is slowly opening up to tourism.

As war in Yemen rages on and controversy around Jamal Khashoggi's murder lingers, Saudi Arabia is turning to influencers to shed a positive light on the country as it slowly opens up to tourism. It is part of a broader PR offensive to improve perceptions in line with Mohammad bin Salman's "2030 vision".

Travel and tourism PR experts believe the use of influencers to change Saudi Arabia's ultra-conservative  reputation is a smart move to side-step traditional media and attract young travellers.

Saudi Arabia has been investing heavily in PR, lobbying, advertising and influencer campaigns to change perceptions abroad, particularly following the high-profile murder of Khashoggi, its role in the ongoing war in Yemen, which the United Nations describes as the world's worst humanitarian crisis, and concerns about the country's human rights record.

Saudi crown prince bin Salman has been on a journey to modernise the country and how it is perceived ahead of bold plans to shift Saudi Arabia's economy away from oil dependency to other sectors, such as tourism.

The country has planned some of the largest tourism resort projects in the world, including an enormous luxury island resort on the Red Sea, an ultra-modern sustainable city and another project dubbed the "Riviera of the Middle East".

There have been civil rights reforms, including the relaxation of its guardianship system to allow women to apply for passports, travel without permission and have more control over family matters – such as registering a marriage, divorce or child’s birth, and being issued official family documents.

The influencer campaigns are focused on presenting Saudi Arabia as an attractive destination with several world heritage-listed sites.

Several PR agencies are leading these efforts, including Influencer – a platform co-founded by Ben Jeffries and Caspar Lee – and Consulum.

Influencers are being taken on all-expenses-paid trips to explore Saudi Arabia’s tourism hotspots that are not so well-known outside the country. Sites include the Red Sea – a famous diving spot – and the Al Ula desert.

The posts PRWeek has seen avoid mention of controversial topics, such as Saudi Arabia’s human-rights abuses, restrictions to civil liberties or the war in Yemen. 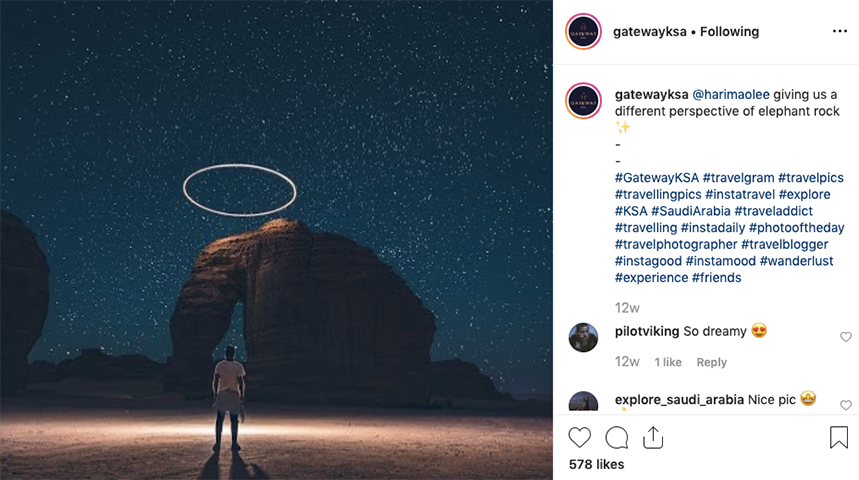 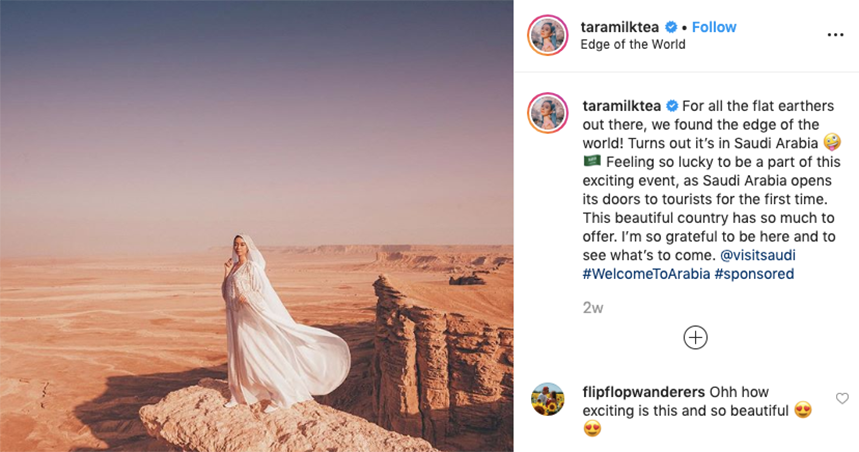 The use of influencers to promote tourism is not new, but in the case of Saudi Arabia it is a relatively new tactic to curate a fresh image of a country that traditionally has a tight control over its domestic media and the social media use of its citizens.

"While I do understand and appreciate the immediate negative reactions to Visit Saudi’s promotional campaign and the influencers who accepted the all-expenses-paid trips, this does not tell the full story and could, dare I say it, be a little short-sighted," Rooster PR managing director and tourism comms expert James Brooke told PRWeek.

"The Saudi Vision 2030 plan to reduce Saudi Arabia's dependence on oil and diversify its economy sets an ambitious target of attracting 30 million tourists a year. In order to achieve this, modernisation and a relaxing of the strict laws is crucial.

"In which case, tourism could well become the biggest catalyst for change in the country. And change is, ultimately, what everyone wants to see."

Paul Charles, founder and chief executive of The PC Agency, said the use of social media stars was a "clever" tactic to attract younger audiences lured by iconic sights more than traditional media.

"It’s attempting to showcase a modern, young-at-heart nation that will appeal to more adventurous travellers keen on finding out for themselves what’s beyond the borders," Charles said.

He accepted that Saudi Arabia’s swing from an extremely closed country with tight visa controls to one that adopts an open visa policy in a matter of days was likely to divide opinion.

However, he added: "It’s very refreshing to see the country open up, but we’ll discover in the coming months how much of a welcome reception tourists will receive as they mix with local citizens.

"Many criticise Saudi Arabia for its human rights record and recent involvement in the murder of Jamal Khashoggi, but it’s not the only country with a damaging past that is trying to turn a corner."

Saudi Arabia's "2030 vision" is bold and ambitious. A crown jewel from a tourism perspective is The Red Sea Project (pictured below) – a luxury tourism resort that it says will set new standards in sustainable development and position Saudi Arabia on the global tourism map.

The project will be developed over 28,000km2 of land on Saudi Arabia’s west coast and includes a vast archipelago of more than 90 islands. There will also be mountain canyons, dormant volcanoes and ancient cultural and heritage sites. It plans to take on the Maldives as the "go-to" destination for luxury island getaways.

There are also other luxury mega-developments in the pipeline, including the $500bn resort city of Neom and Amaala (pictured below).

"What excites me most is the anticipated $3.5bn to be spent by Saudi Arabian citizens who are now allowed to travel to other countries – that is a tantalising prospect for hotels, destinations and airlines who have the opportunity to attract a new group of travellers who’ve never left Saudi Arabia before." 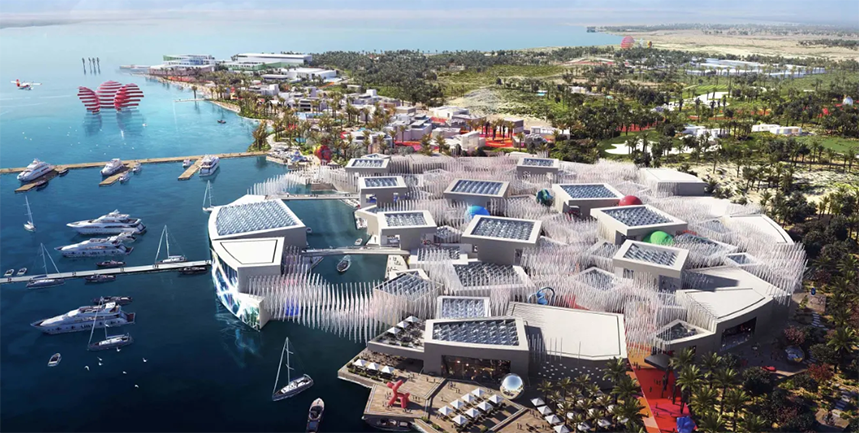 Influencers are not the only marketing tactic Saudi Arabia has been using to improve its image. The country has run strategic paid advertising campaigns to coincide with the visit by bin Salman and a new campaign to promote tourism, with outdoor advertising in key spots such as Piccadilly Circus.

It has also spent tens of millions on lobbyists across the world and retained many consultancies in the wake of Khashoggi's murder.

There are other programmes that are not being run by the government but provide a bridge for young people to visit the previously closed country. A high-profile programme that has been in the press recently is Gateway KSA, an NGO that has been bringing over young graduates, dubbed "future leaders", for a cross-cultural educational exchange programme where they learn about the country.

In the past few years, the programme has invited several hundred young people to visit the country, including 19 influencers and content creators.

Gateway KSA was set up by Nelleke Van Zandvoort-Quispel – a Dutch-Australian national – following a visit to the country a couple of years ago.

"When I first visited Saudi Arabia, I had a lot of reservations based on what I had read and seen in the media," she told PRWeek.

"I was astonished at how different it is in reality. I wanted to give people the opportunity to see Saudi Arabia objectively and make up their own minds."

Participants spend nine days sightseeing and taking part in roundtable discussions and other sessions with local business leaders and government departments, as well as interacting with local families, students and NGOs.

Van Zandvoort-Quispel said there are no topics off limits – such as Khashoggi, women’s rights and human rights – and participants are not paid to post on social media or elsewhere.

Gateway KSA told PRWeek the programme appears to be shifting perceptions among participants, with 88% of students saying it had a positive effect in changing their perception of Saudi Arabia and 97% saying the country's portrayal in the media was not an accurate representation. 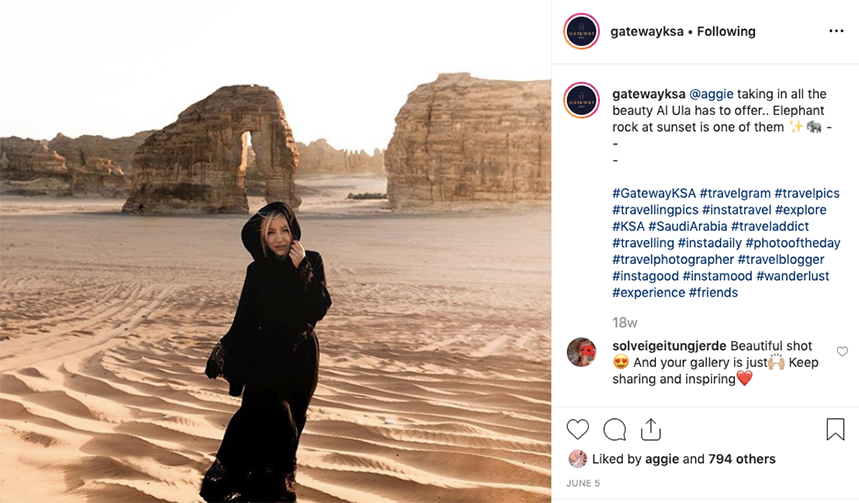 One influencer who took part, Travel in Her Shoes travel blogger Aggie Lal (pictured above), told Bloomberg: "My expectations were very low. I didn't hear anything positive beforehand, to be honest. But my impressions were very positive. Gateway KSA connected us with real women, they weren't hiding them from us."

It will take more than influencer campaigns to transform Saudi Arabia's conservative image as a tourist destination of choice, but few can question the country's ambition and the vast sums of money it will invest to get there.

"The true test of Saudi’s openness will be whether it can attract visitors usually keen on the Maldives to these areas," Charles said.

PRWeek approached Consulum, Influencer and several influencers who had visited the country for this article.

Anthony Joshua's plan to fight in Saudi a 'low blow'

Snapchat has removed Al-Jazeera from its app in Saudi Arabia