From its debut in 1968, Campaign has held up a mirror to the ad industry. We look back at some of the best front pages chronicling events that have shaped advertising.

Campaign’s reputation as adland’s weekly must-read for almost half a century was born out of a belief that trade titles didn’t have to be full of reheated press releases and handout pictures of people ‘enjoying a joke’ at industry get-togethers.

Nowhere was this stupefyingly boring approach better epitomised than in Worlds Press News, out of which Campaign grew.

Campaign was all the things WPN wasn’t. Above all, it was news-led – carrying attention-grabbing front-page headlines and banning ads from the following four pages.

From its debut on 12 September 1968, Campaign has held up a mirror to the ad industry. Unsurprisingly, the industry didn’t always like what it saw. The Daily Telegraph and TV Times were among the first to withdraw advertising after editorial criticism and Lindsay Masters, Campaign’s founding father, was once threatened with violence at a conference.

The result, though, has been a feast of front pages chronicling the events that have shaped the industry. John Tylee looks at some of the best. 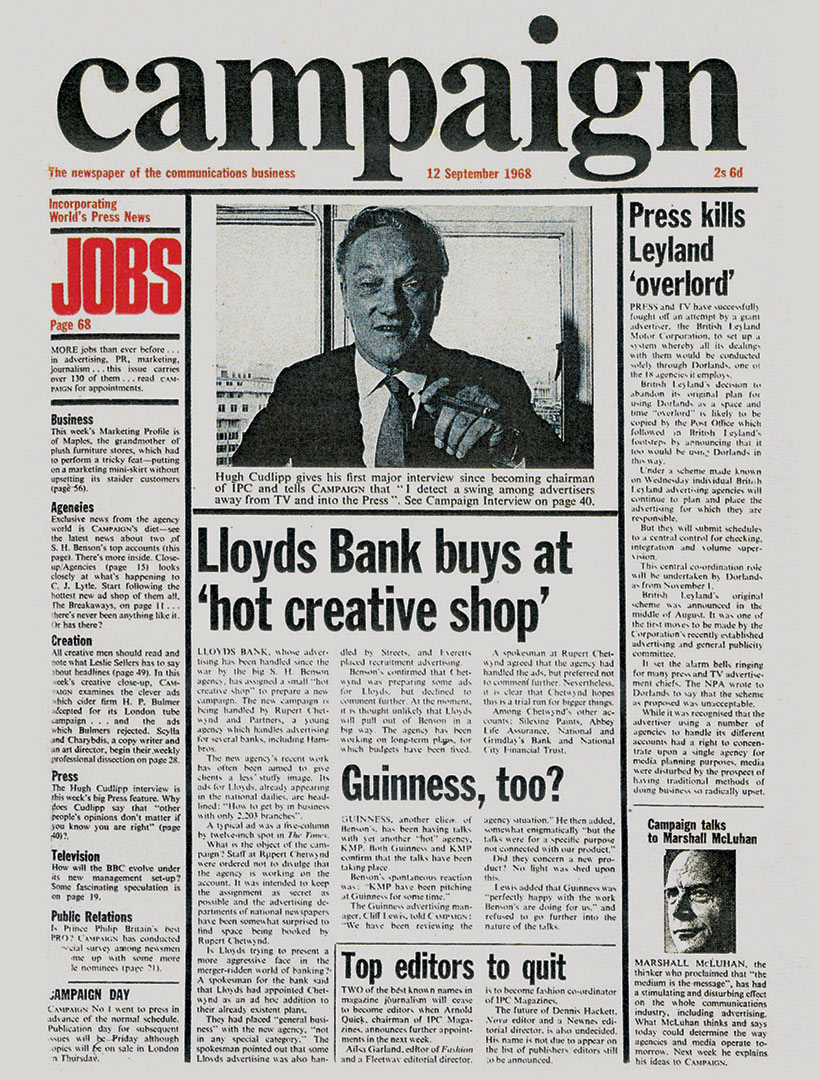 From the off, Campaign took up the cudgels for an emerging UK ad industry finding its own voice in a US-dominated global adland. Rising from the ashes of a title called Worlds Press News, Campaign soon found its place as an edgy addition to Michael Heseltine’s Haymarket stable.

Based on Roland Schenk’s iconic designs, Campaign was different from any other trade title. "The news stories looked punchy and elegant and this uncompromising approach gave the magazine a completely different look," Lindsay Masters, who masterminded the launch, later recalled. 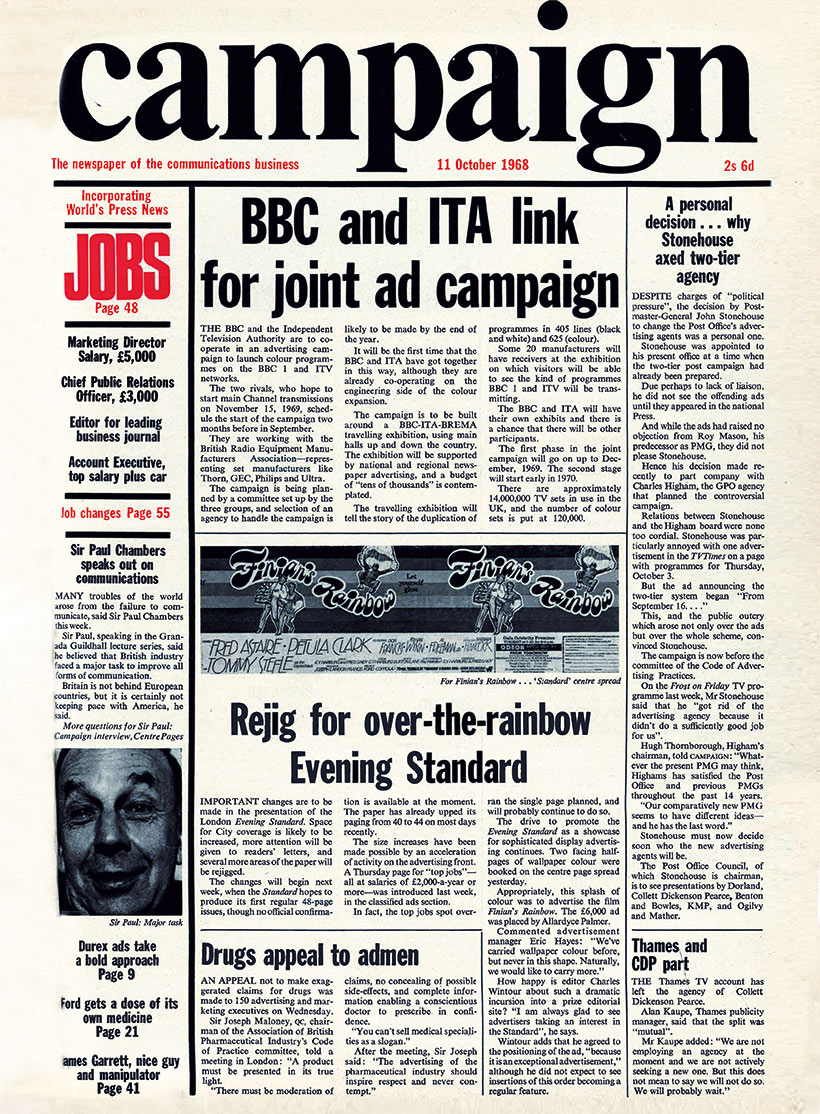 With British TV being given the government go-ahead to broadcast in colour from 15 November 1969, the BBC and the Independent Television Authority joined forces to promote the initiative. A promotional exhibition travelled around the country, supported by national and regional press advertising. 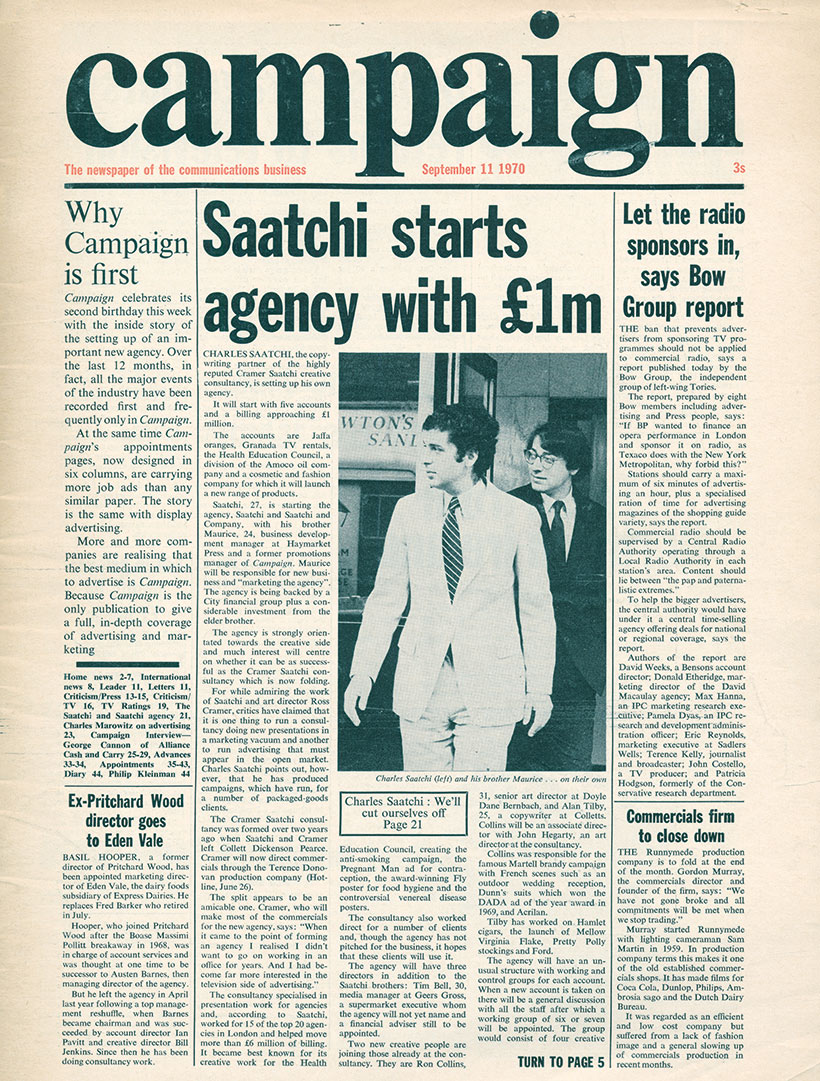 With hindsight, it’s easy to see why Campaign splashed on the launch of Saatchi & Saatchi. But why the star treatment at the time? Mainly because Charles Saatchi had been a great source of news tip-offs. This was payback time.

Much of Charles’ hype was taken at face value. He claimed to have £1m worth of billings when the real figure was around £250,000. And there was no "City financial group" backing the venture – only a consortium of Haymarket chairman Lindsay Masters and some of his wealthy friends, who provided the start-up funding. 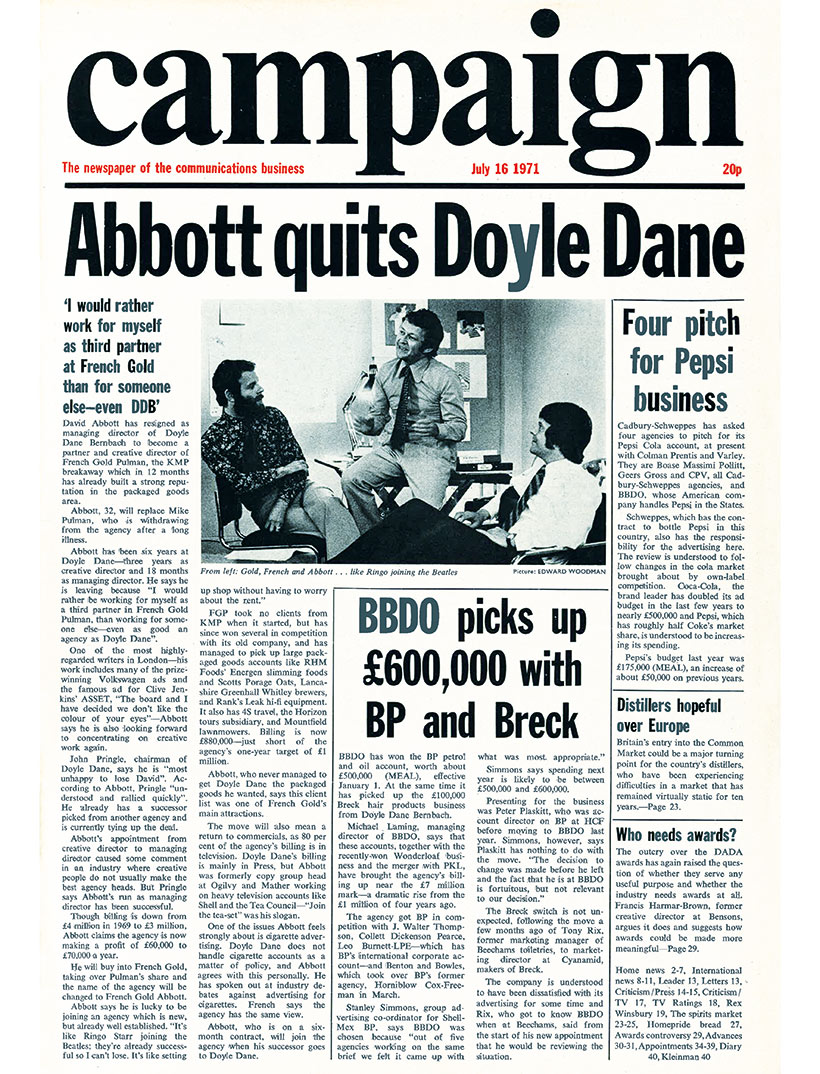 This was a pivotal moment for David Abbott on his journey towards helping found Abbott Mead Vickers BBDO.

Appointed DDB’s managing director in his twenties, Abbott feared he might have peaked too early and resolved to form his own agency along with Mike Gold and Richard French.

FGA did some good work but Abbott was never completely happy. He chose to leave in 1977 believing, ironically, that it was impossible for a large agency to sustain its creative potency. 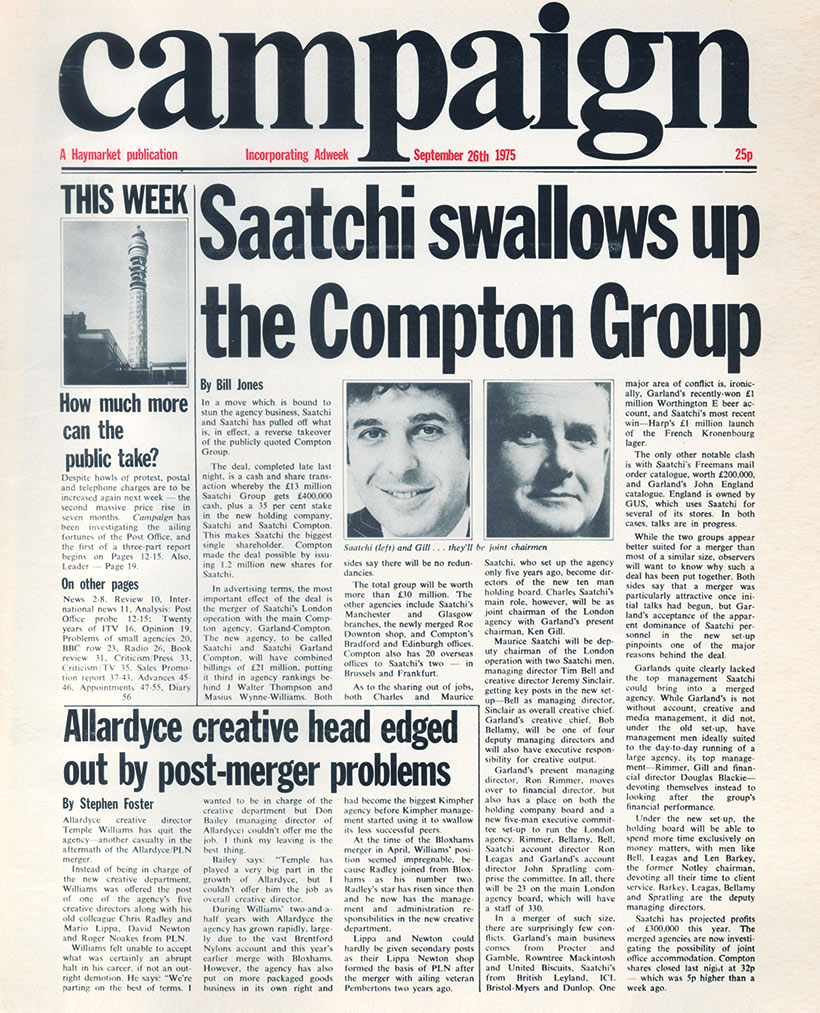 Never before or since has Campaign considered a story so important that it brought publication forward by a day to break it.

The reverse takeover of Garland Compton by Saatchi & Saatchi was a huge story. By ignoring the accepted wisdom that creative hotshops and mainstream agencies could not merge into a single entity, the brothers showed that they were aggressively on the march. 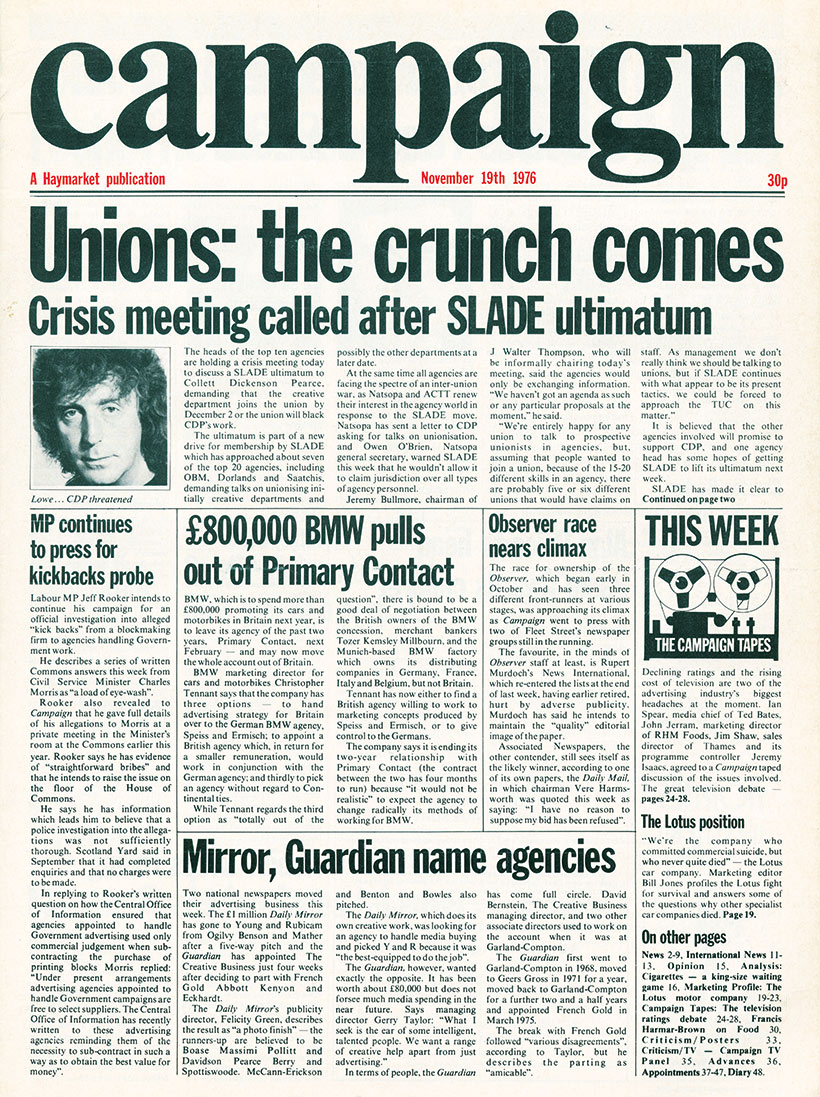 Adland’s one and only confrontation with militant trade unions is barely remembered. Under threat from new technology, the National Graphical Association and the Society of Lithographic Artists, Designers and Engravers warned agencies that, unless their staff joined the SLADE Art Union, they would be "blacked" by every repro house, newspaper group and magazine publisher in the country.

SLADE finally caved in under pressure from the Trades Union Congress and other unions, whose members’ livelihoods were being threatened by its activities. 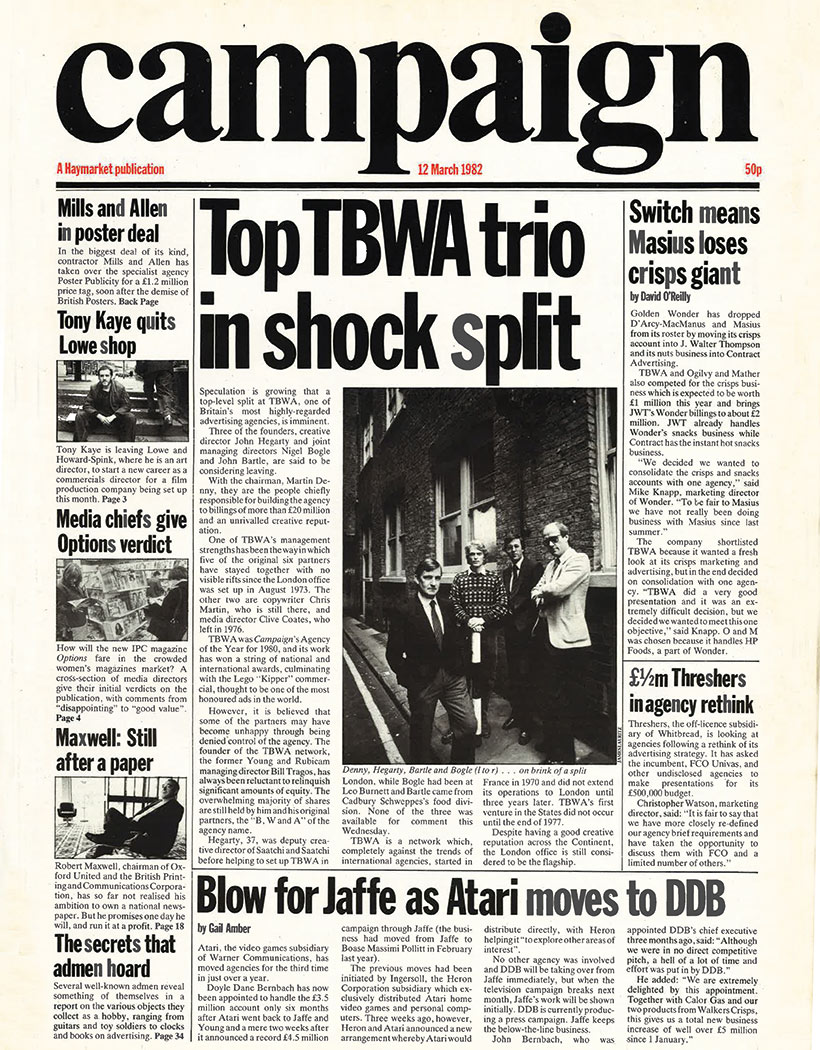 The three in question were John Bartle, Nigel Bogle and John Hegarty. Bartle, Bogle and Hegarty were the core management team at TBWA in London but were growing increasingly frustrated that TBWA’s board wasn’t sufficiently rewarding their achievements. "They told us to fuck off," Hegarty later recalled. "So we did."

In fact, their timing was perfect. New shops could launch with minimal cost back then and advertisers were less nervous about going with start-ups. Within 12 weeks, Bartle Bogle Hegarty had landed Audi, Whitbread and Levi’s. 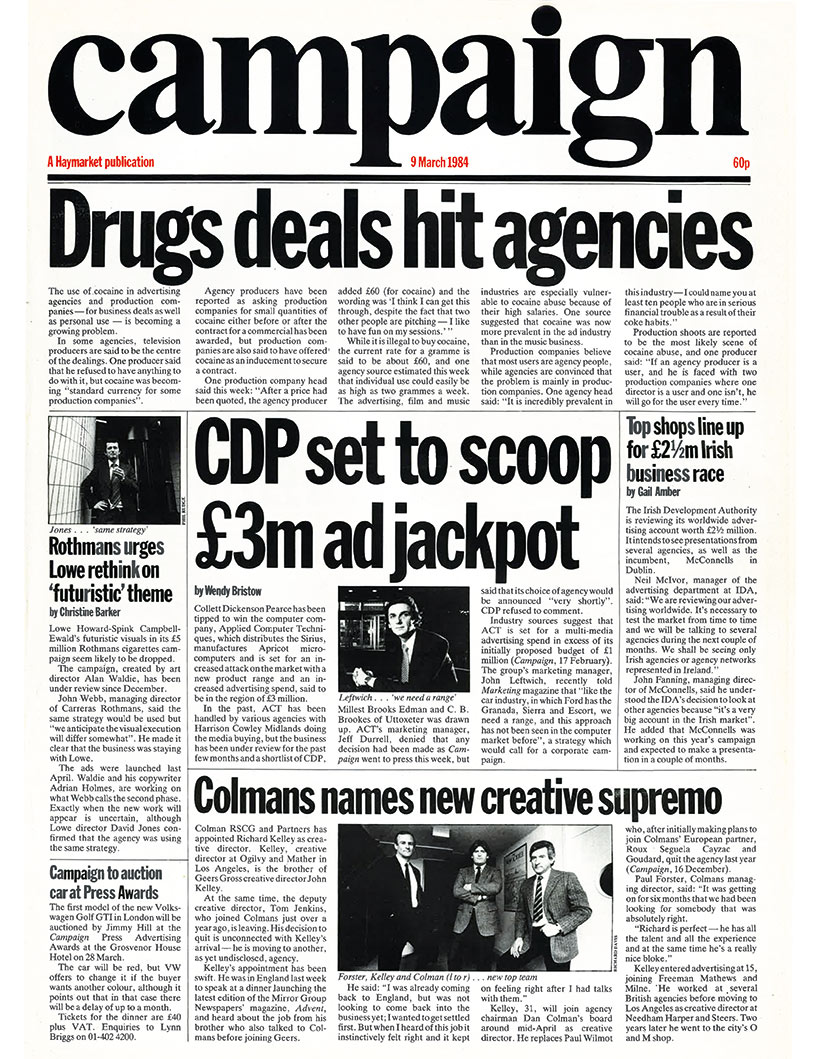 Adland’s cocaine habit was well enough known before this Campaign splash appeared. What made this story different was its allegation that cocaine "bungs" were influencing the way business was being conducted. The reporter who wrote it pleaded not to be given a byline.

The story claimed that some agency producers were asking production companies for small quantities of cocaine either before or after a contract for a commercial had been awarded. Production companies were also said to have offered cocaine as an inducement. 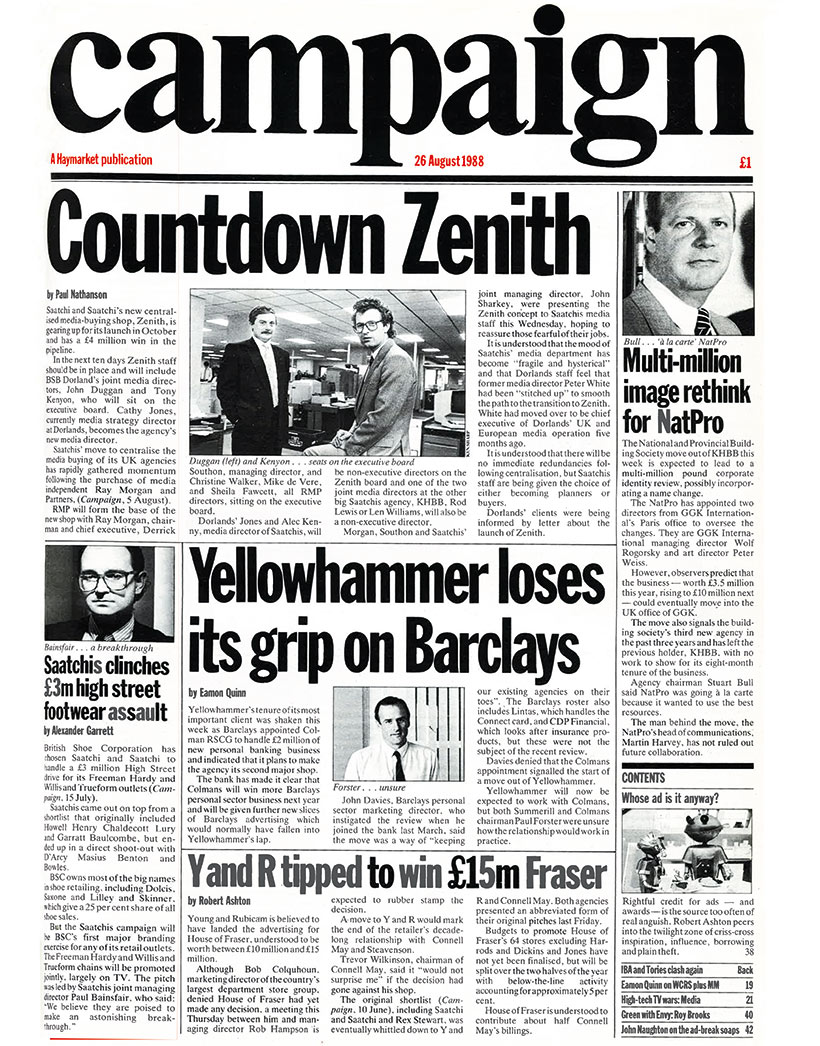 The launch of Zenith Media by the Saatchi & Saatchi group was a game-changer. Formed out of the media departments of Saatchis, Dorlands/Ted Bates and the newly acquired Ray Morgan & Partners, Zenith was the first specialist media operation to be set up by a traditional ad agency holding company, providing the group with media buying clout.

However, it wasn’t all plain sailing. Campaign reported a "fragile and hysterical" mood within the Saatchis media department and a fear among Dorlands media staff that Peter White, their former boss, had been "stitched up".

AMV and BBDO strike a deal 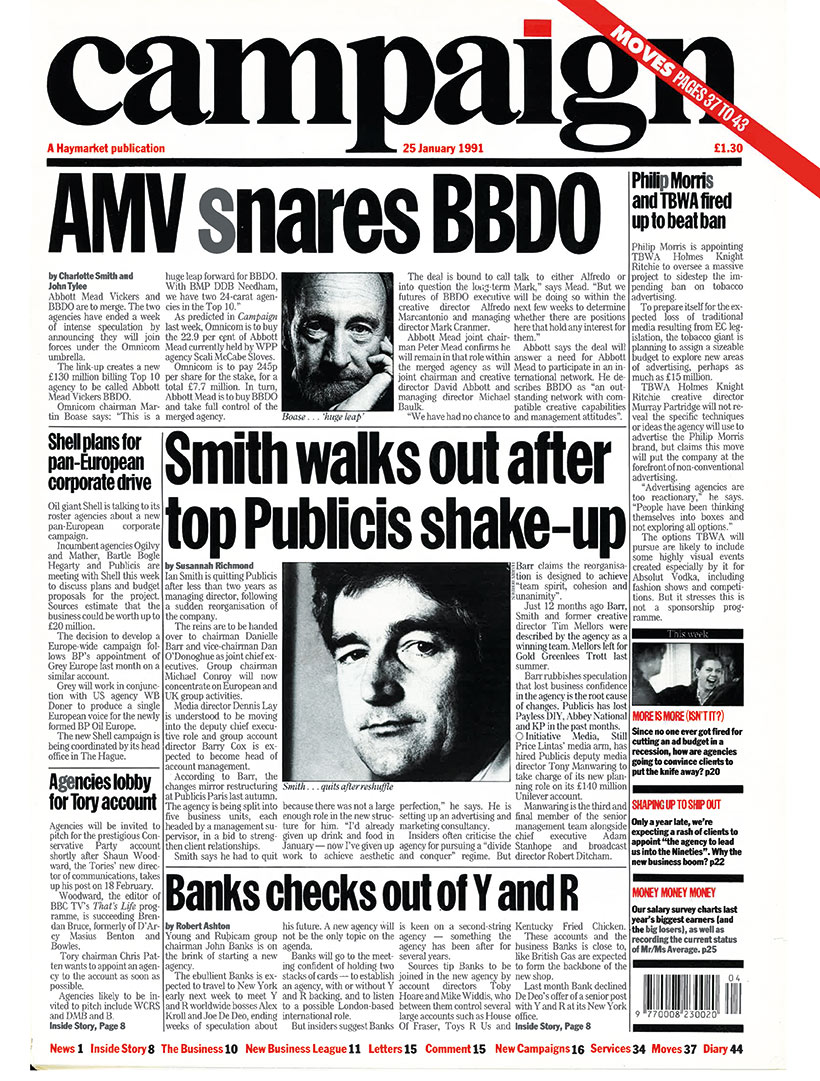 Adland’s history is littered with mergers ending in tears. From the carefree early 1980s, when agencies’ eagerness to cash in on their success led to many false fits, to the recession-hit 1990s, when mergers were done to cut costs.

The most spectacular exception was when the Omnicom-owned BBDO bought a 22.9% stake in Abbott Mead Vickers. Not only did it provide AMV access to the international stage, it gave BBDO a creative engine room to drive its business across Europe. Today, Abbott Mead Vickers BBDO is one of the UK’s most celebrated shops. 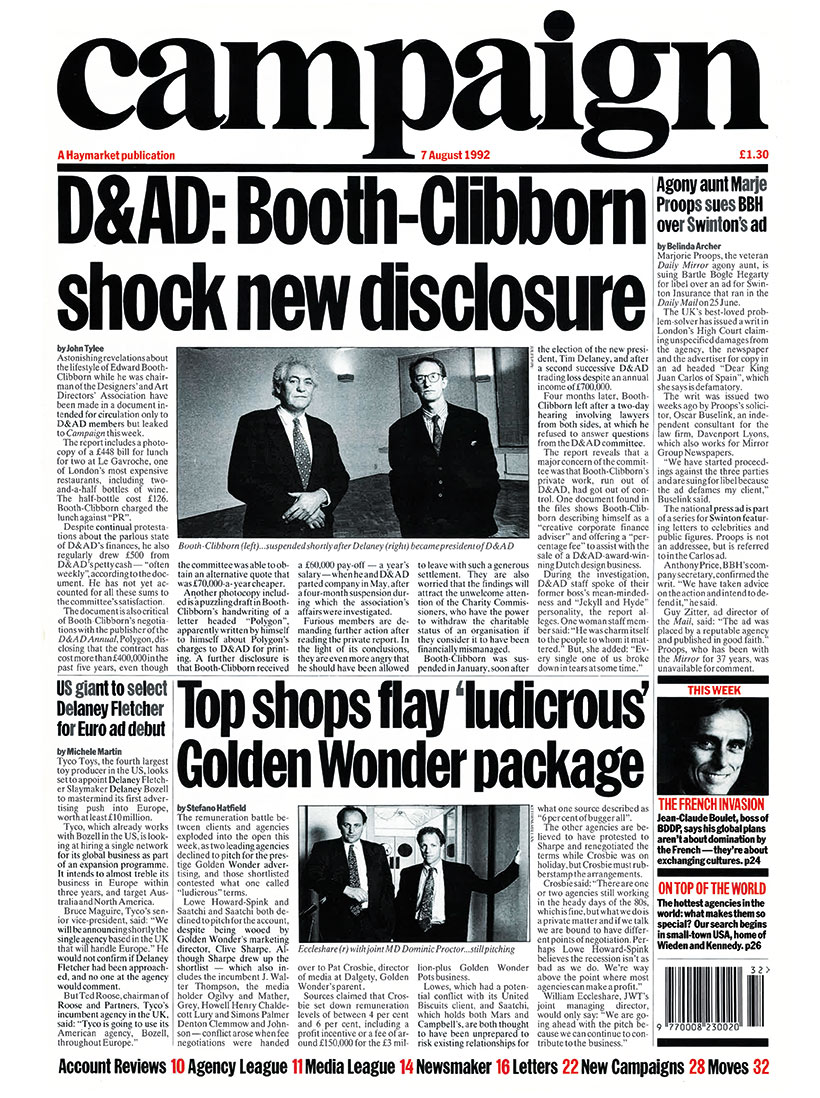 This was the story that revealed what has probably become the most infamous restaurant bill in British advertising history. It covered lunch for two at Mayfair’s Le Gavroche and came to £448, including a half-bottle of wine costing £126. The lunch was charged against "PR" by Edward Booth-Clibborn, then chairman of the cash-strapped D&AD.

It came to light after a four-month investigation that culminated in Booth-Clibborn’s exit with a £60,000 pay-off, provoking outrage among many D&AD members. At the time of the lunch, the average weekly wage was £340. 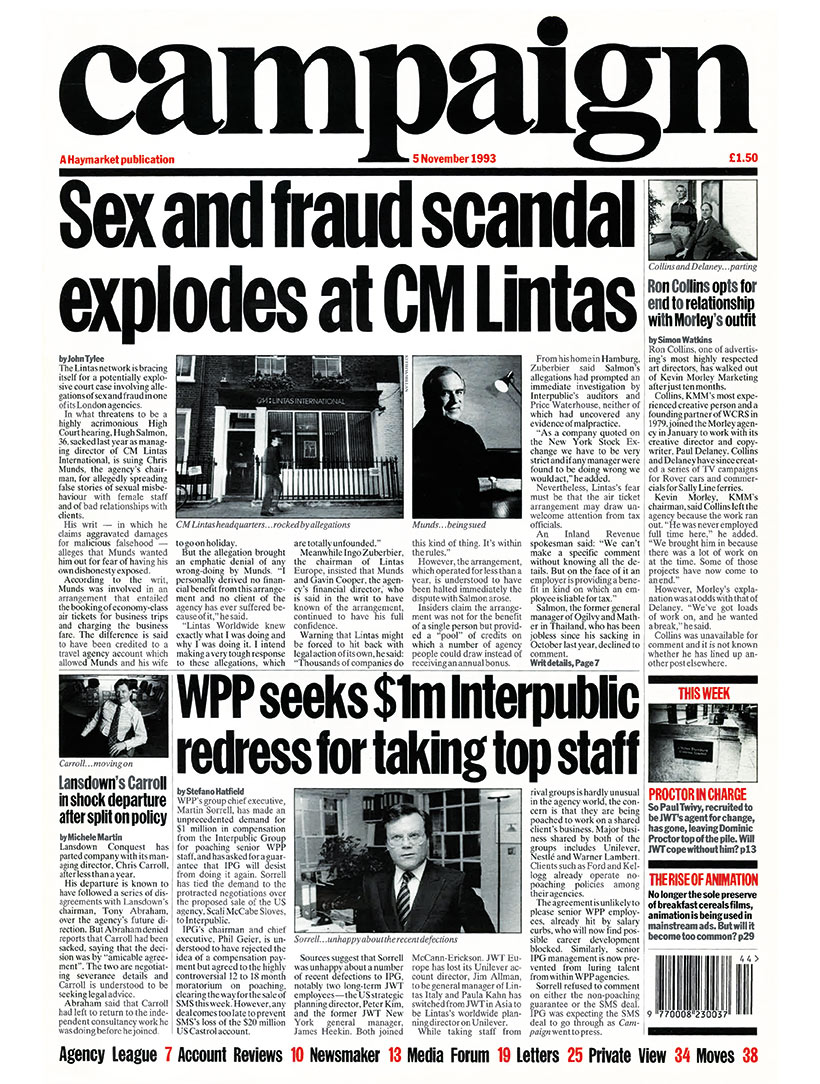 Munds made allegations – later withdrawn – of sexual misbehaviour with women in the office. Salmon claimed the real reason for his dismissal was his exposure of Munds’ involvement in financial irregularities.

The case never went to court. Interpublic paid Salmon around £500,000 in settlement, having conceded that he had been wrongfully dismissed. 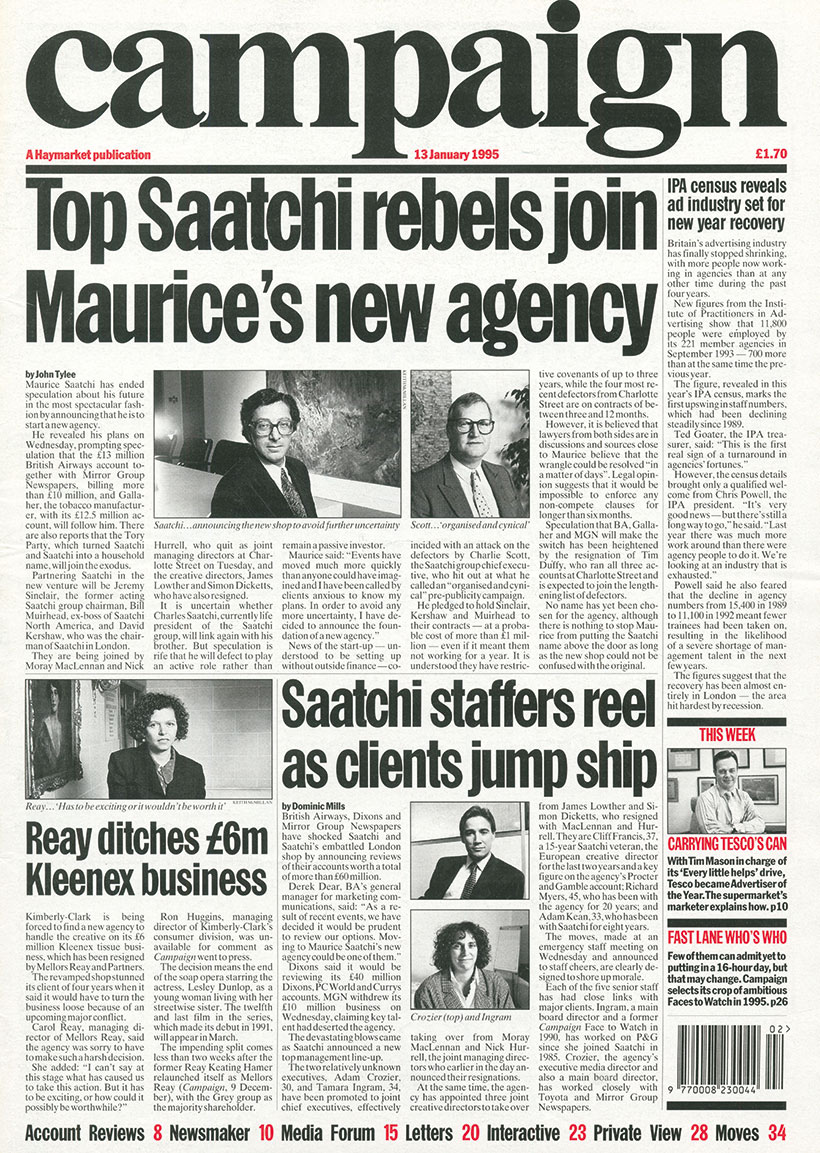 Christmas 1994 was anything but a season of goodwill at Saatchi & Saatchi as speculation mounted on how Maurice and Charles Saatchi would seek revenge after their exit.

Campaign revealed the answer the following month when Maurice announced the launch of what was to become M&C Saatchi along with a group of defecting senior executives. The story predicted that British Airways, Mirror Group Newspapers and Gallaher would follow them.

Death of an advertising legend 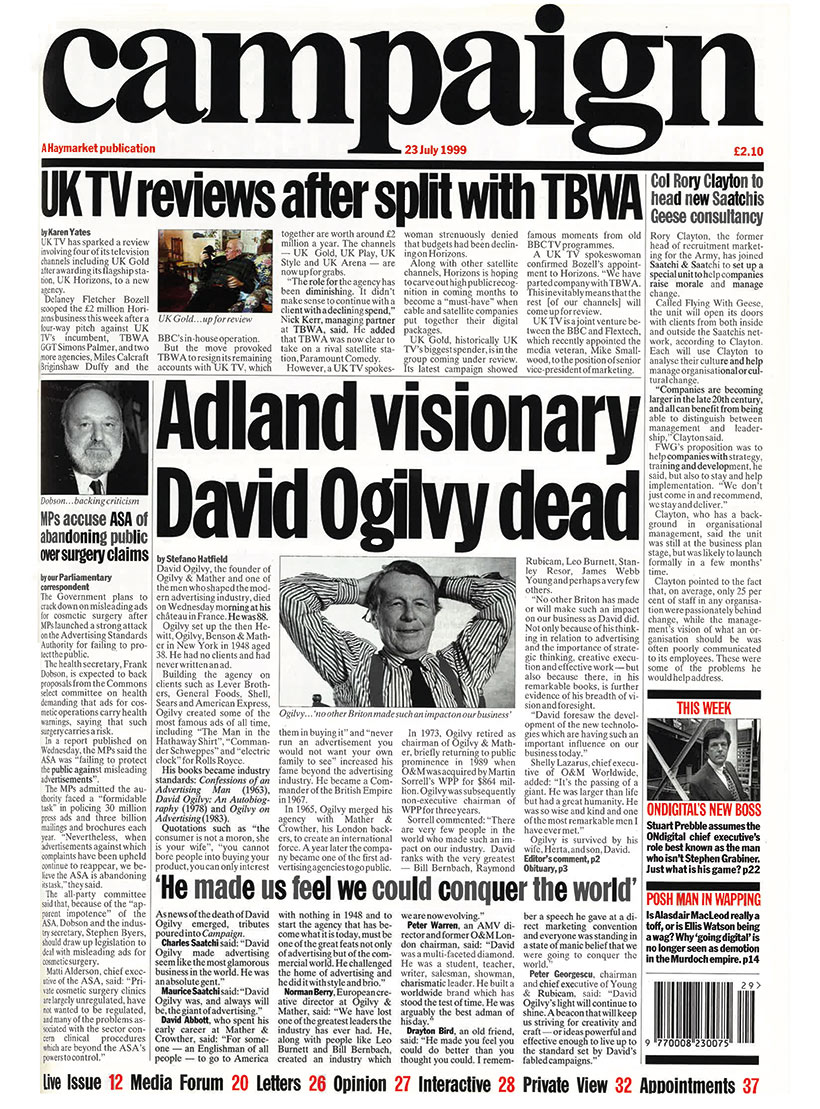 David Ogilvy’s passing on a Campaign press day enabled the magazine to perfectly mark the death at 88 of the last of the industry titans and, arguably, its first Mad Man.

One of the few entitled to sit alongside Bill Bernbach, Leo Burnett and Ray Rubicam in the pantheon of industry architects, the Ogilvy & Mather founder inspired generations of ad people.

Such was Ogilvy’s influence that his death was treated with disbelief, even though his direct involvement with advertising had ended 25 years earlier. 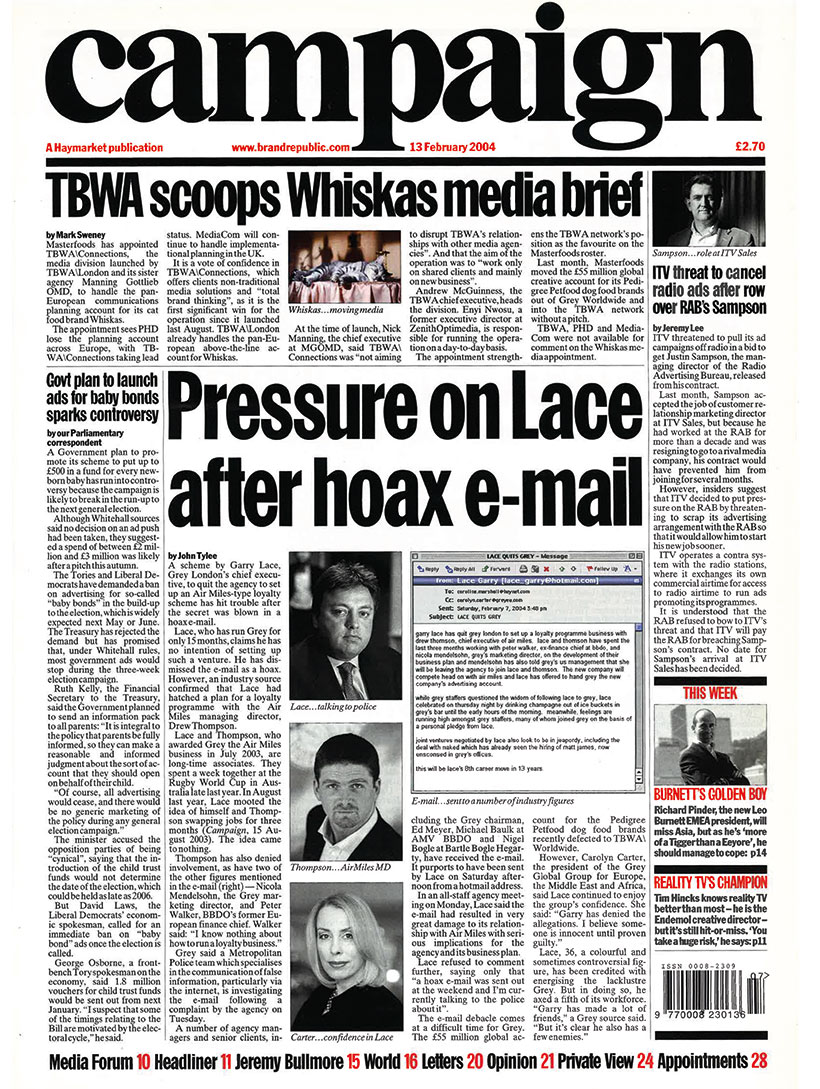 A colourful and controversial figure, Garry Lace had been appointed Grey London’s chief executive with a brief to re-energise the lacklustre agency. In doing so, he axed a fifth of the workforce.

So was it one of them who sent the email to a number of agency managers and clients claiming that Lace was setting up a loyalty scheme with Air Miles managing director Drew Thomson? Lace dismissed the email as a hoax and called in the police. Little more than a month later, he quit Grey. The hoaxer has never been unmasked. 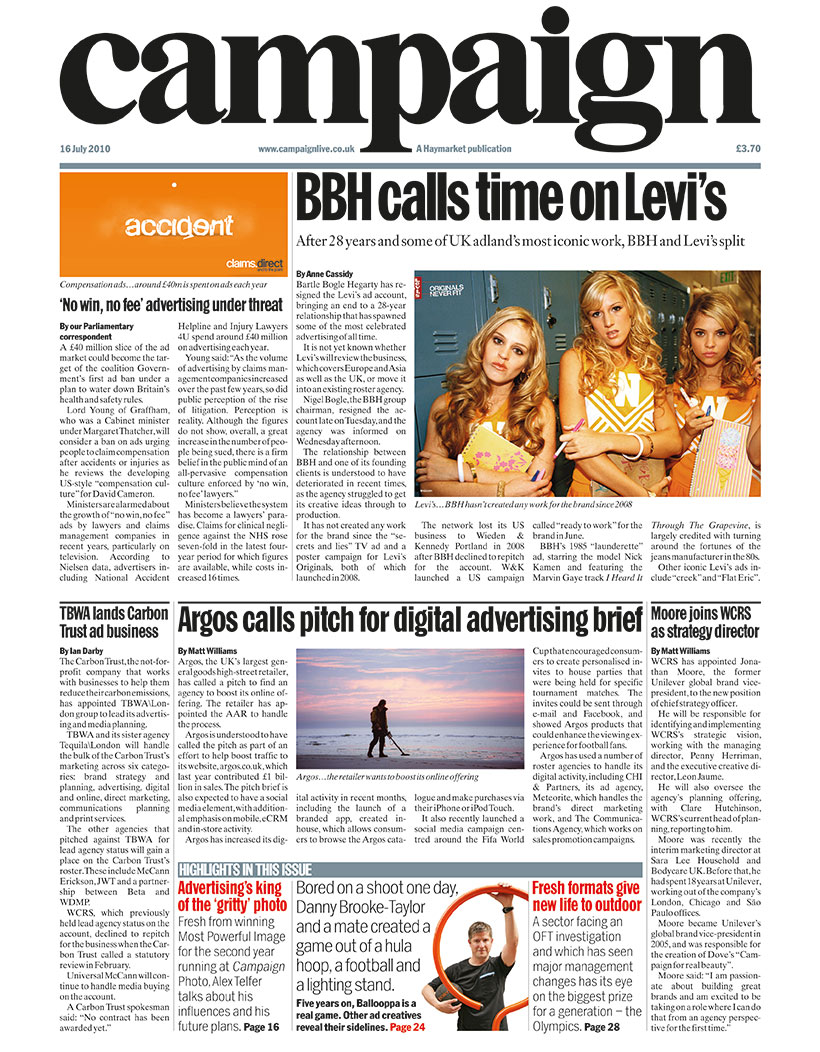 "BBH calls time on Levi’s" was how Campaign announced the end of one of the longest and most creatively productive relationships in British advertising with news that Bartle Bogle Hegarty was terminating its 28-year association with Levi’s.

It was a partnership that not only cemented BBH’s reputation as one of the UK’s most creative shops but transformed Levi’s from workwear to a cool youth brand.

Campaign wrote that the relationship had deteriorated over time as BBH struggled to get its ideas into production. 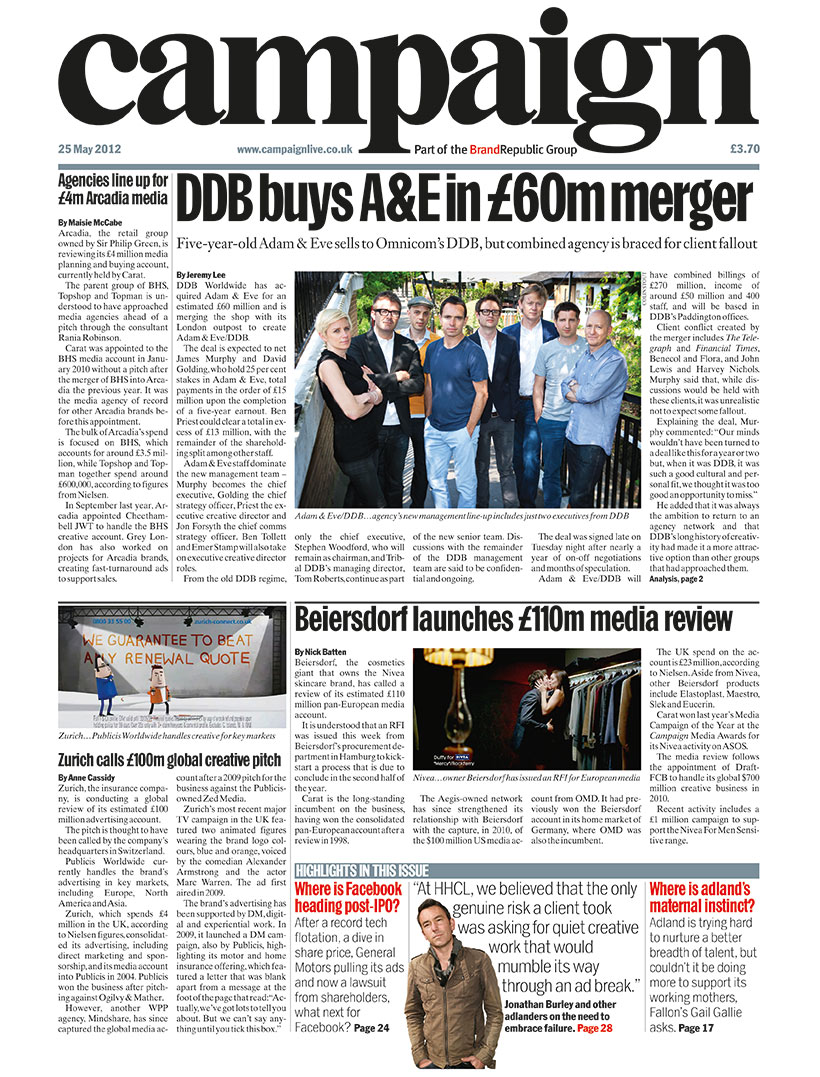 With so many agency mergers down the years having failed spectacularly, the £60m alignment of Adam & Eve with DDB London under the Omnicom umbrella is proof that it can be done – without trauma.

Adam & Eve/DDB was named Campaign’s Ad Agency of the Year for the third successive time in 2016 – evidence of how successful the pairing has been, bringing together one of the UK’s most creatively successful independent shops, eager to replicate its achievements on a broader scale, with one that seemed to have gone significantly off the boil.

Tributes pour in for Abbott 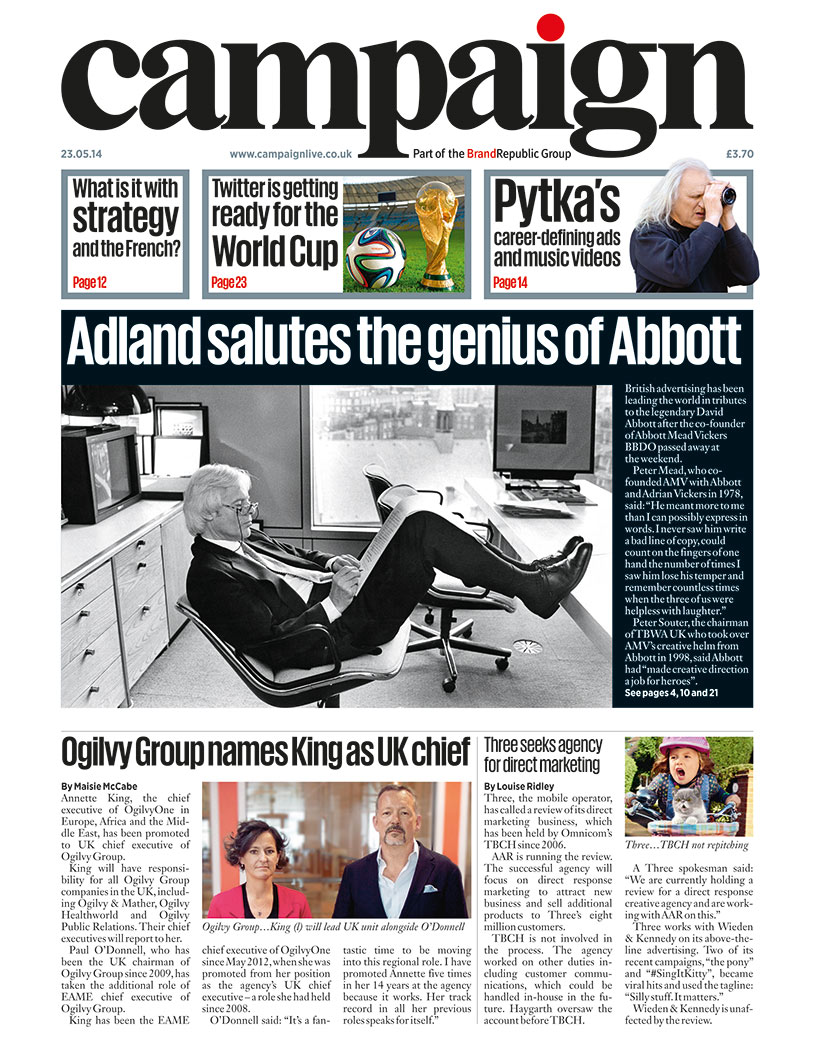 David Abbott’s sudden death at 75 provoked shock and grief across adland. Not only was the Abbott Mead Vickers BBDO founding partner one of the finest copywriters Britain has seen but his warmth and principled behaviour helped give advertising an acceptable face.

Always elegant and lucid in his work, Abbott was no better defined than by the genteel character of JR Hartley, who found his out-of-print book on fly fishing with the help of Yellow Pages. No writing better reflected Abbott’s style than the wit and brevity of the Economist posters.

Why Cognizant's entry to the marketing space is so significant

Thanks for the memories

Change is in the air for Campaign - and you

History of advertising: No 192: The world's first 'black' ad agency

History of advertising: No 191: Old Spice's 'Smell like a man, man' campaign