Campaign's art editor, Chris Barker, on how creating the cover for the School Reports 2021 issue made him feel like the old woman in the shoe.

I remember being impressed by [Haymarket group art director] Tim Scott's School Reports issue cover for Campaign a few years ago. A school photo line-up of the great and good of adland, shot in a school hall on benches and framed in the familiar brown cardboard surrounds we all remember from our own school days. It felt like an idea I would have come up with and was executed with typical flair by Scott.

2021 and it's my turn. It's one of the biggest issues of the year and it needs to have a great cover. I didn't just want to do a watered-down version of the school photo idea, though. Plus, obviously, it would technically be in the grey area of legality under the current social-distancing measures.

I needed an idea that would get round the cover restrictions and also sum up the year. Homeschooling – and all of its frustrations – has been a big part of a lot of our lives for the past 12 months. I personally lost count of (and patience with) the number of times my two dropped their pencils within about a week. This made me think that the School Reports issue should reference this chaotic shared experience.

I didn't much fancy handling the logistics of the "commissioning" process, but luckily Maria Iu [digital content editor, Campaign] stepped up and took charge. Hats off to her, I really didn't think it would be as successful as it was.

Within days, the folder started filling up with absolute gold. In fact, like the old woman in the shoe, there were so many children, I didn't know what to do. I really didn't like the idea of leaving some of them out. Particularly where the same grown-up had got two different children to draw them, I couldn't bear the thought of the look of disappointment on the rejected child's face. So I decided I would try to use as many of them as possible in the accompanying features inside the mag.

As the images kept rolling in, I kept having a new favourite. It's so intriguing to see the world from a child's perspective, from the ones that are just a head with legs to the older kids who clearly think they know everything now.

Equalising all the images was more of an effort than I had assumed it would be. A lot of them were drawn in very light pencil and photographed in very heavy shadow, so there was a lot of adjustments that needed to be made to make them all clear. I hope I haven't redrawn and ruined any of the children's artistic visions. I can only imagine how hyper-critical I would have been if some jumped-up art director had fiddled with anything I'd drawn at that age.

I think the finished cover (see enlarged version) looks pretty effective. I got my son to write the coverline in his neatest handwriting to top it off and it's always a little treat when one of my covers gets featured on coverjunkie.com – the cover designers' bible.

With thanks to the little artists… 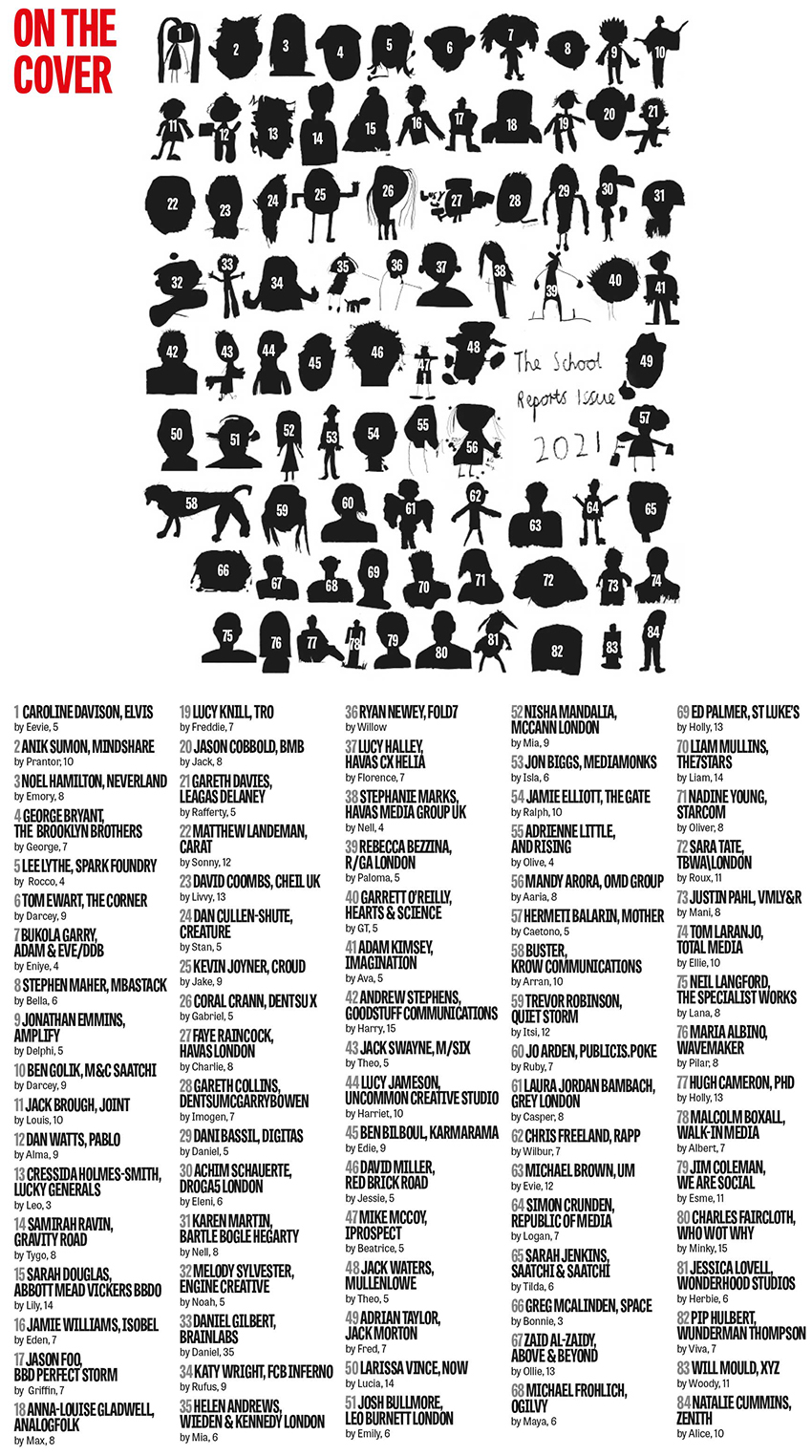 So, you think your agency should have scored a 9?

School Reports 2021: Meet the class swots who got top marks

School Reports 2021: Testing times as most agencies declined during Covid

School Reports 2021: Adland could still do better on diversity

Navigating the past year has been a huge achievement for agencies