Dutch lager Grolsch has schtopped – sorry, stopped – selling in the UK and Ireland, after the owner of the brand, Asahi, ended its licensing agreement with UK brewer Molson Coors.

While Asahi declined to comment on whether Grolsch will return, a spokesperson confirmed the move, first reported in trade magazine The Grocer.

The development comes just a year after the beer brand appointed its first centralised global agency, J Walter Thompson (now Wunderman Thompson). The green-bottled beer with the distinctive swing-top cap – which was the inspiration behind its first UK ad in 1985 by Holmes Knight Ritchie/WRG – has also worked with BMB, Karmarma, Leith and VCCP on advertising.

From consumer challenges to immersive work to hilarious spots, Campaign looks back at some of the most memorable work during Grolsch’s 35 years in the UK.

This imaginative spot by Leith opens with a traditional wedding scene. But, like the classic Hollywood cliché, a man yells "Schtop!" when the congregation is asked if they know of any reason why the couple should not be joined in holy matrimony.

Grolsch's mascot at the time, Ronald Topp, unexpectedly reveals the bride is in fact a chimp – a nod to Darwin’s theory of evolution, which perfectly lends itself to the ad’s strapline: "Grolsch – we only let you drink it when it's ready."

This spot could be a scene from Scary Movie. In it, the Grim Reaper arrives to whisk Ronald away to his death. But Ronald persuades Death to spare him and go after someone else, listing all the funny things he still has to do before he dies.

The work, by Leith, emphasises the idea that the lager should be savoured, not rushed.

Simple and classic. From the emerald green bottles dancing to the saxophone’s rhythm to the droplets of beer splattering and dripping across the screen, there’s something strangely addictive about this spot. The cinema ad was created by Leith. 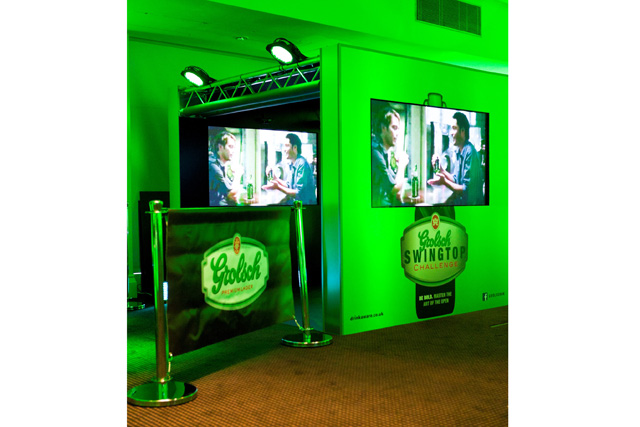 More popular than the beer itself perhaps was its swing-top cap. 1980s pop group Bros even inspired a fashion trend that involved wearing the cap on shoelaces.

So capitalising on its popularity with the "Swingtop challenge", created by Life Experience, was an inspired move for the brand. Grolsch invited consumers around the UK to step into an interactive game cube and open as many virtual bottles of the lager as possible in 60 seconds. In exchange for the chance to win prizes, gamers had to register their details with the brand.

To celebrate 400 years since the Grolsch brewery was founded in Groenlo by Willem Neerfeldt, Grolsch commissioned artists to produce 400 pieces of art that redesigned its bottle. The artwork featured on limited-edition packs and was revealed online on the brand's anniversary, 11 May 2015.

A road tour brought the global campaign to life, giving consumers in eight UK cities the chance to sample the beer while creating some artwork of their own to share on social media.

In Shoreditch, a street art installation was unveiled as part of the activity. Graffiti artists were commissioned to build a giant installation featuring 400 Grolsch bottles in 400 minutes.

The bespoke designs were used in an integrated campaign by VCCP.

The eerie spot, reminiscent of a rock music video, follows the camera panning across an empty gallery space guarded by a sleeping attendant. As intensity heightens and the viewer can’t help but worry if the guard is going to wake up, the music volume increases to reveal a Grolsch bottle made entirely of cables, speakers and neon lights.

The cinematic ad is by VCCP. It was directed by Charlie Robins – who has previously worked with artists including Tinie Tempah, Emeli Sandé and Naughty Boy – making great use of his music video heritage.

Grolsch 'walk the line' by Marvellous