Coca-Cola is revamping its Schweppes brand with a historically inspired new bottle design, premium range of mixers and a major ad campaign.

The drinks company said the £6.6m being spent was the biggest investment in the brand in the UK in its 234-year history.

The campaign comes as Schweppes attempts to hold on to its dominant share of the market against the rapid growth of premium brand Fever-Tree.

Fever-Tree has already gained a significant presence in bars and venues, and is now also threatening Schweppes’ market share in supermarket sales.

Recognising what it called "the growing demand for quality mixers", Schweppes is making two major changes. The mainstream Schweppes Classic range will relaunch in a new, skittle-shaped bottle inspired by the bottles originally used by the product’s creator, Jacob Schweppe, in the late-18th century.

The redesign is being supported by a £6.6m marketing campaign running from this month to December, including TV, cinema, out-of-home and print. McCann Madrid has created the TV campaign, with Recipe working on the OOH and print components, Mesh on shopper marketing, and Haygarth on experiential.

Alongside this, the brand is launching a new, premium range, Schweppes 1783 – named after the brand’s year of creation. Made with natural flavours and a higher carbonation level, it is packaged in the same new bottle design, but with black and gold colours in place of the brand’s usual yellow. 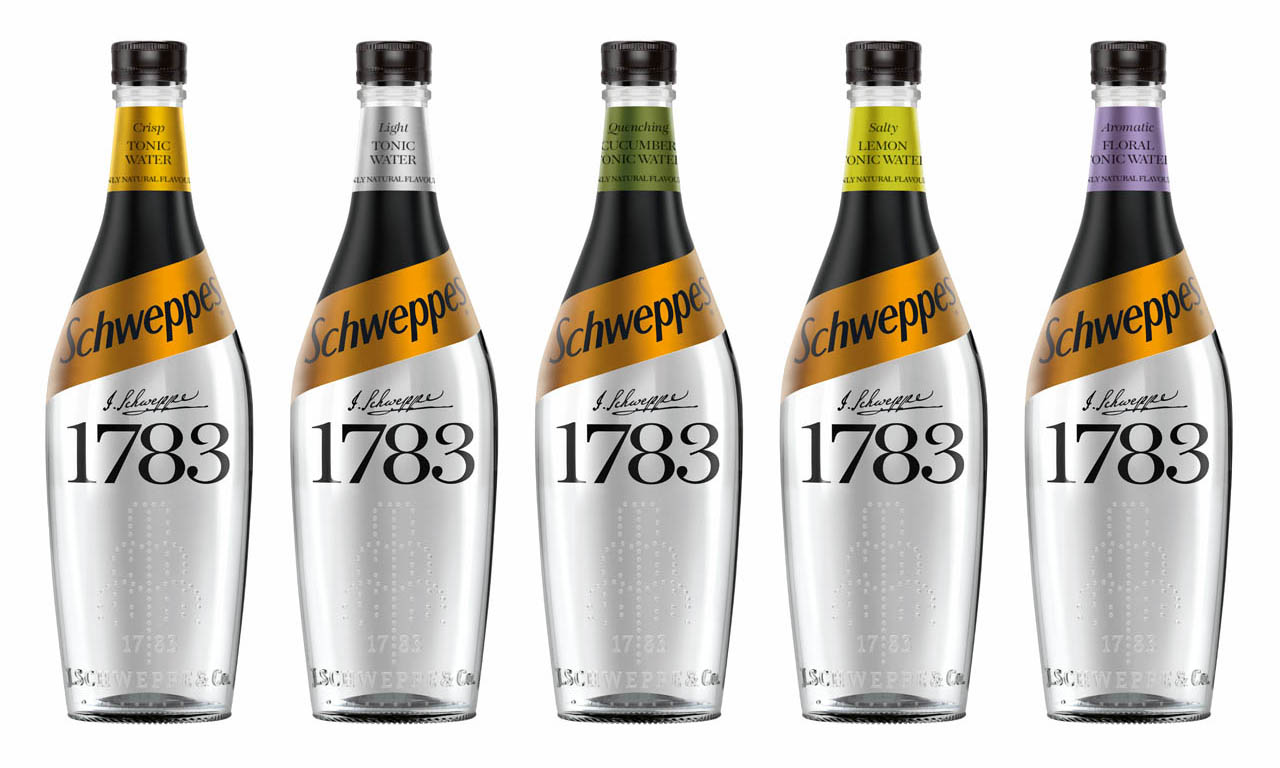 As well as the conventional crisp tonic water, light tonic and golden ginger ale, the 1783 range will include three distinctive flavours: salty lemon tonic, quenching cucumber tonic, and aromatic floral tonic. The new products will be targeted at bars and venues initially, becoming available in shops at a later date.

The new bottle and the 1783 are being launched this week with a pair of experiential events at London Cocktail Week.

Aedamar Howlett, marketing director at Coca-Cola Great Britain, said: "Schweppes is an iconic brand with a strong British heritage, and 2017 marks a new chapter in the brand’s long and impressive history.

"Our new signature shaped skittle bottle will provide a premium exterior to the superior liquid and effervescence bottled inside.

"Our new Schweppes 1783 range combines the perfect carbonation and balanced taste of Schweppes with natural ingredients and unique flavours. We have taken the time to seek guidance from mixologists and drinks experts to create this distinguished range of mixers that will appeal to new age of mixer drinkers that are keen to discover new taste combinations."

How Schweppes is appealing to 'experimenters' with a pop-up bar

How Schweppes is appealing to 'experimenters' with a pop-up bar