Lucy’s effigy sits, scowling at me, under my monitor. She is in a bad mood and she could give zero fucks about letting me know it. It’s probably because I’ve blu-tacked her to a piece of computer hardware.

Or it might be because she is a 65 year old tweenaged "take my wife" joke (Schulz apparently modelled the character on his first wife who was described by sources close to the cartoonist as "opinionated and domineering"). Christopher Caldwell, the acceptable face of neoconservatism described her as "an American nightmare … the most terrifying character in the history of comics". If there’s one thing we’ve learned this year it’s that many Americans are more frightened of occasionally grumpy women than they are of, for example, dying in a nuclear war. 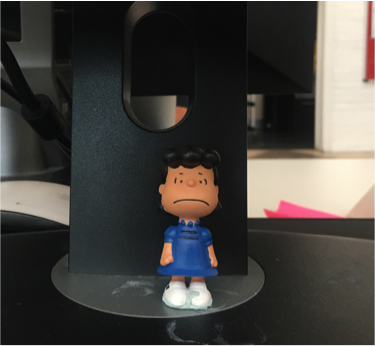 But as I say, Lucy is perfectly aware of her reputation for "crabbiness" and is not here to make others happy (as she once asked, if we were put on earth for that reason, what are the Others here for?). She is not here to sugarcoat her five cents or advice ("snap out of it") and she will not be satisfied, until she is too smart for her own good.

Maybe watching me and my colleagues banter, negotiate and seek consensus is irritating her. Our industry runs on friendships, goodwill and partnerships, which I think she probably thinks is a bit wishy-washy and slow. Or in her words "Life is too short to waste it listening to some person who doesn't know when to shut up! Time is too valuable! 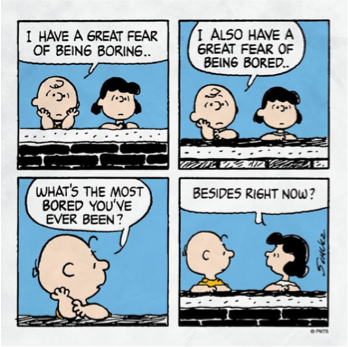 Equally, in lovely sociable crowds like ours, it’s also easy to forget that consensus and collaboration are a means to an end, and not the end in themselves. Making things that matter is the actual goal, and really these days we should be in as much of a hurry as Lucy is, when she isn’t glued to a monitor, that is.

Like a little rubber dreamcatcher, Lucy Van Pelt sucks up my own bad temper: there is, as Shulz knew so well, nothing quite as funny as watching someone in a really filthy sulk so she kind of cheers me up, despite herself. She’s also a girl I can stick up for, in a culture that still often demands that we girls make nice, make coffee and don’t make any trouble, whilst often listening to people bore us shitless without letting them know.

But mainly, Lucy reminds me that what matters really, is not that you please the world, but that you fix it.

Meet the adlanders who made life-changing decisions in 2017

My secret work weapon is my Nokia 6310

My secret work weapon: The elephant in the room

Above & Beyond CEO: my cockapoo is my secret work weapon