Health and fitness clubs have been hit by the recession, but the sector is still expected to grow by about 10% in the next five years, writes Jane Bainbridge.

The gloomy economic climate has led many people to reassess their spending priorities. Even those unaffected by redundancies and cutbacks are likely to have increasing food and utility bills that outstrip any pay rises they may have had.

While many sectors fall into the 'essentials' category and are relatively recession-proof, the health and fitness industry does not. People understand that taking exercise is beneficial to their health, but private gyms and health clubs are not the only place where it can be done.

Cutting back on a £50-a-month membership is a relatively easy saving, especially for those who sign up to a direct-debit membership and then use the facilities infrequently. 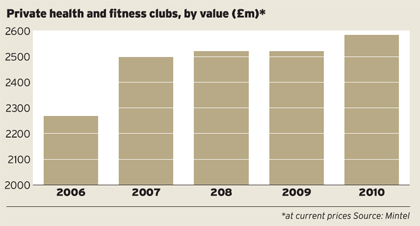 Despite these figures, the industry has felt the impact of the credit crunch, and most operators have experienced a decline in business. The drop was, however, perhaps not as severe as some had predicted, and none of the major players went under. Even Total Fitness, which went into administration, was bought by Barclays Ventures in October 2010. Others chains have ditched less-profitable clubs, and there has been some consolidation, such as Virgin's acquisition of Esporta in April.

Membership and joining fees account for 80% of revenues, with the rest accounted for by sources such as catering, beauty treatments and retail sales. The balance has shifted toward the former in recent years, as members have cut back on secondary items. Margins have been squeezed as running costs, particularly utility bills, have increased. 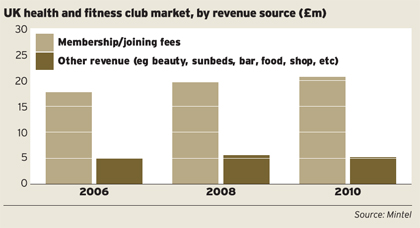 Clubs can adapt, however, to generate more business. Research by Ipsos MORI shows that flexibility on joining fees and membership formats could appeal considerably to those put off by a strict approach to such matters, regardless of attendance. 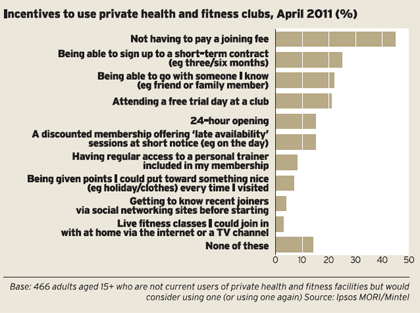 This ties in with an interesting development, with most of the growth in the sector having come from the no-frills-style clubs.

The Gym Group and Pure Gym are two businesses expanding their presence, while the energie brand operates a franchise business that includes Fit4less. Meanwhile, easyGym, the latest budget-brand extension from the easyGroup, now has two clubs open.

Although the rise of the budget gym is one innovation, development typically focuses on equipment and classes on offer in the clubs, such as Virgin Active adding the Rip-CoreFX training product to its gyms and the sudden popularity of Zumba classes.

A key feature of the industry is that it is fragmented. The top seven operators account for just 23% of all clubs and 39% of members, and there is still a big number of single-site businesses in the UK. David Lloyd is the chain with the most members, followed by Virgin. Fitness First is the biggest in terms of number of clubs.

When it comes to competition, health and fitness clubs have public facilities such as council-run swimming pools and gyms to contend with. Also, many people opt for outdoor exercise such as running, cycling and sports clubs.

Alternative outdoor exercise groups such as British Military Fitness and classes for mothers with babies in buggies also provide options for those looking for a different type of exercise.

Meanwhile, people who prefer to exercise away from the public eye can do it courtesy of celeb-endorsed exercise DVDs and the Wii Fit.

Although immediate signs of improvement in the industry may be minimal, in the long term, things should pick up as the focus on healthy living continues. The industry is expected to be worth £2.9bn by 2016, almost 10% more than it is now, and average revenue per member is forecast to increase from £499 in 2011 to £505 in 2016, according to Mintel. 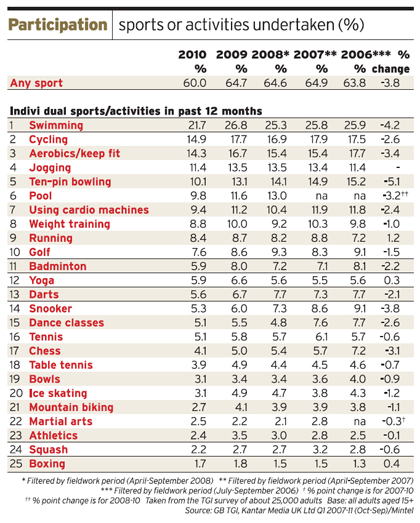