Sweet and savoury spreads have enjoyed success over recent years, but with a high level of market penetration, brands must innovate.

From Marmite's no-nonsense 'Love it or hate it' proposition to Nutella's successful assault on UK households, transforming it from a tasty continental curiosity to a much-demanded children's breakfast staple, there are several case studies in marketing excellence to be found in the sweet and savoury spreads sector.

Last year was a better one than 2009, when the worst of a collapse in the honeybee population was over and increasing commodity prices hit volume sales, but drove up value.

The sector covers a wide range of products, from jams and marmalade to peanut butter, pates and cheese spreads. However, in general, it is sales of sweet spreads that have risen at the expense of savoury.

Most of the growth has come from peanut butter and chocolate spread (up 40% between 2008 and 2010), as changing tastes among UK consumers push traditional sweet options such as jam and marmalade down the pecking order. 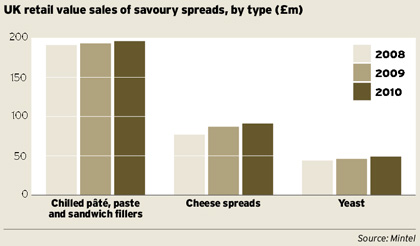 While traditional varieties of sweet and savoury spreads like marmalade and pate appeal most to older consumers, chocolate spread is more popular among younger groups. Peanut butter enjoys broad appeal, with only the over-55s not yet won over, according to TGI.

Amy Lloyd, food and drink analyst at Mintel, says: 'Sweet and savoury spreads are used by more than seven in 10 consumers, but, with the categories fighting with each other, as well as external markets such as cereal and prepared sandwiches, there is a need for diversification to stand out from the crowd.'

Innovation has been predominantly at the premium and convenience ends of the market. As in so many food sectors, these are the trends most evident from changing lifestyles and consumption habits and within that, sweet varieties have adapted best.

Another focus of innovation has been the introduction of the squeezy bottle, now widely added to brands' ranges to appeal to children and 16- to 24-year-olds. Leading brand Hartley's launched its Squeezy Smooth Jams in March 2009. Similarly, Robertson's added a Golden Smooth Orange Marmalade squeezable variant to its range, with Paddington Bear on the pack.

Further innovation will be needed to bring in younger consumers to the category to ensure future growth, as use is currently skewed to the over-55s in every category except peanut butter, chocolate and chilled spreads.

At the premium end of the market, glass jars remain popular because of the strong visual and tactile luxury cue this format achieves compared with plastic packaging.

Elsewhere, health has been another focus of product development. Weight Watchers has extended its range of jams and marmalades, while reduced-sugar specialist Streamline Foods has adapted its communication strategy from 'low-sugar jams' to emphasise quality, using the strapline 'More fruit, great taste, less sugar'.

Savoury brand Marmite, on the other hand, has invested in brand extensions such as flavoured cereal bars and bread sticks, as well as its Marmite XO matured yeast extract, which was developed following consumer suggestions made in response to a social-media campaign.

Meanwhile, both chocolate-hazelnut spread Nutella and honey brand Rowse have used TV to build brand awareness. The 'Wake up to Nutella' campaign has been running for several years and won an IPA Effectiveness Award in 2009. Rowse, meanwhile, took the DIY approach with ads scripted and shot by as well as starring its staff. Via a Facebook campaign, consumers could vote for their favourite execution; the winner was shown on national TV earlier this year.

Sweet spreads are most often consumed at breakfast, with savoury preferred for snacks or in lunchtime sandwiches. At breakfast, toast and spreads face strong competition from cereals, which are seen as both a healthy and convenient choice.

Mintel forecasts this sector will be worth £839m by 2015. The challenge for brands, given the high penetration (four out of five consumers, according to TGI) is to increase use-occasions, so they are eaten more frequently, and broaden the demographic of its customers to grow the market.

Laughing Cow 'pull the udder one' by Dare

Kraft commits to upping its adspend