To celebrate the 90th anniversary of Scottish five-star hotel Gleneagles, creative agency Sedley Place has created an exhibition featuring memorabilia, photos and other items linked to the venue's history.

The exhibition, which will be on display until the end of December, includes memorabilia such as photographs of events and profiles of previous employees to showcase the venue’s evolution over the years. It will take place in various areas of the venue, and will centre around three themes – ‘The Great and the Good’, ‘At Your Service’ and ‘Pin Interest’.

At Your Service, focused around Gleneagles’ previous and current staff, includes original doorbells, staff photographs and flip charts for members of the public to look at, while the Pin Interest area charts the hotel’s association with the Ryder Cup in the run up to this year’s golf competition. It includes a golf memorabilia archive, which will change throughout the exhibition with new photographs and this year’s winning ball.

The Great and the Good collection focuses on the hotel’s most distinguished guests, including Her Majesty The Queen, members of the G7 and various celebrities such as Sean Connery and Tina Turner. This particular archive has been placed opposite the hotel’s main formal dining area, the Strathearn restaurant, and is constantly being updated to include new guests. 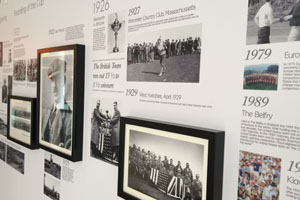 Anness Brown, head of marketing at Gleneagles, said: "Ahead of the Ryder Cup this year, the 90th anniversary celebrations represent an exciting and ambitious development in the history of the hotel. Sedley Place has perfectly captured the spirit of The Palace of the Glens and brought to life its vibrant heritage."

Jeremy Roots, head of graphics at Sedley Place, added: "Celebrating such a significant milestone as a 90th anniversary is an important task. We worked closely with the hotel’s extensive archive to ensure the essence of Gleneagles’ rich history was captured. This exhibition celebrates the establishment’s past and welcomes the next chapter in its history."

Keep up to date with our latest sport news on our dedicated Sport channel, and on social media via the hashtag #EventSportnews.

Ryder Cup fans to use RFID for brand experiences