Department store Selfridges will be hosting a six-week pop up art exhibition in Manchester and in-store events nationwide as part of its Festival of Imagination.

The art exhibition was revealed yesterday (16 January) in Manchester’s Exchange Square and forms part of the store-wide campaign designed to explore the nature, power and positive impact of imagination.

A series of pop-up events curated by Maria Balshaw, director of the Whitworth Art Gallery and Manchester City Galleries, will run until 16 February in Selfridges Manchester as part of the campaign. They will include talks, lectures and conversations from some of the world’s leading artists, writers and academics.

The event series has already featured a conversation with British artist Richard Wentworth on Wednesday (15 January). It will also feature a one-off conversation on 5 February between Turner Prize-winning artist Jeremy Deller, BBC Radio 6 Music DJ Mary Anne Hobbs, and DJ and historian Dave Haslam, who will discuss how disruptive the imagination and creative vision can be. 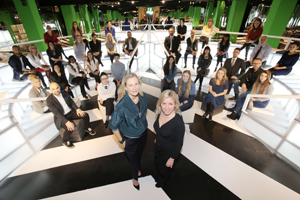 "In the year that the Whitworth will open in new and extended form, I am delighted to bring to a wider audience some of its incredible artworks, proof for Selfridges and its shoppers of the power of the imagination".

At Selfridges London yesterday, Lucy Hawking, novelist and daughter of scientist Stephen Hawking, launched its imaginarium – a space where a series of  discussions, debates, lectures and interactive activities will take place.

Selfridges has also set up imaginariums in its Birmingham and Manchester stores.

More than 40 other contributors will host over 100 imaginative sessions during the festival across all three stores. Selfridges' in-house event team will be handling all the activity around the event.