For its latest Lexus ad, 'slide', CHI & Partners filmed a pro skater leaping two-and-a-half metres... over a moving car... on a real-life hoverboard. What could possibly go wrong?

As we head off to the set, Nikki Cramphorn, our most brilliant of film producers, turns on the radio in the car. Freddie Mercury belting out A Kind Of Magic. Really naff but rather apt, I’d say – I’m almost tempted to sing along. After more than a year of pretty much every producer in my department working their nuts off to make the impossible happen, we’re finally here. I can’t believe we’re actually going to film a real-life, straight-out-of-science-fiction hoverboard. Woo-hoo!

The pre-production meeting went incredibly well, despite the bum-clenchingly scary nature of the project. Our director, Henry-Alex Rubin, is ace – collaborative, open and solution-focused with so much energy and enthusiasm for this job. Along with our director of photography, Ken Seng (straight off a $100 million Marvel shoot and armed with every camera gizmo you can imagine), he walked us round the set rather than talked us through a storyboard. You can’t replicate the buzz and excitement of the skatepark with storyboards and, because of the way we are going to capture our hoverboarder, Ross McGouran, on film (warts and all – failures as well as triumphs), it would be pointless to have a traditional shot list. Ross was already on set, practising. He has to, not least because of that final jump. Two-and-a-half metres, and everyone saying that it’s impossible. Every time Ross attempts it, we have a collective heart attack.

There is a real appetite to deliver the film much earlier than we originally planned. We were taken by surprise by the amount of PR the teaser film generated, and we want the film to break without the whole story being pre-told. Everyone in the team is pulling out all the stops, with the client agreeing to a crazily tight approvals process, and the editor and Henry cutting the film on set. It’s more akin to a pitch process than a traditional ad shoot – quick and reactive and, ultimately, incredibly liberating. We all think (hope!) that this way of working will lend a great spirit and energy to the film.

So here we are, on set at last.  So much security around the park to try to keep it under wraps for as long as possible; so much buzz and excitement once we get through. I love, love, love the first morning on a shoot – that brilliant nervous energy.

And, straight off the bat, the hoverboard tries to commit suicide on the water jump, catching the water and flipping off the track. It takes two hours to dry out. While Ross and his skateboarding amigo Nacho twiddle the laces on their Vans, we take the opportunity to try out the octocopter camera, flying high and wide over the park. It looks magnificent.

With the board dry, we let Ross and the guys loose for the rest of the day, capturing them messing around, filming their genuine delight at the wonder of it. It’s brilliant: no acting, no post – just the magic of something truly amazing. 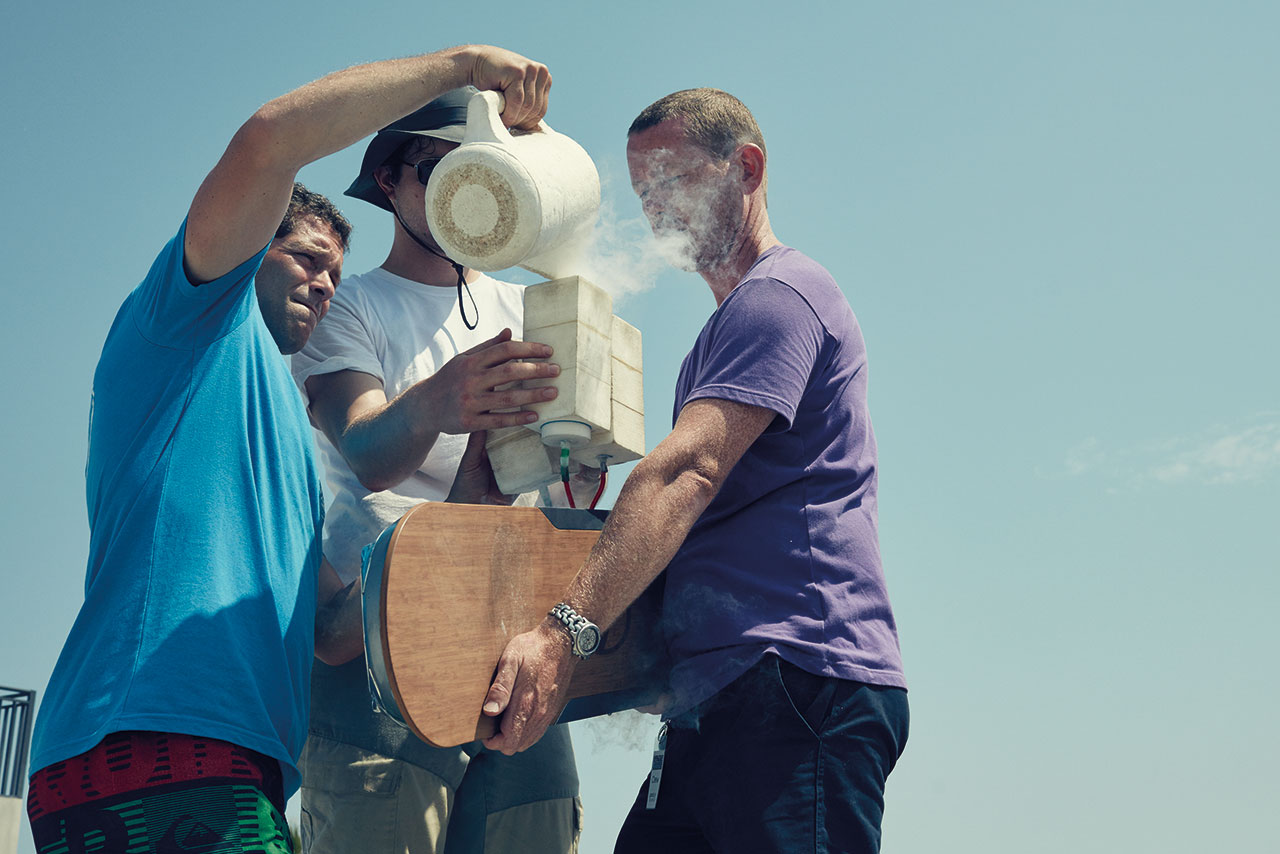 Two hours later, we’re picking up shots of the curve after the water and it’s apparent that the board is struggling. The stress on having to pick up extra shots in a shorter time period because of the accident is apparently taking its toll. With all cameras concentrating on every bit of board action, the thing that’s really suffering is what we’re calling "the gravy" – the lovely true reaction shots, the hanging out and honest "day in the life" moments. Step forward, Ben Hanson and Simon Frost, our superhero creatives/directors/editors from Carbon, the production arm of our content division. The board regains its mojo and the boys start capturing gravy like there’s no tomorrow.

The scientists hypothesise that the board had been struggling because of the Barcelonan weather. The humidity was creating condensation, which was getting through the vents and freezing when it hit the liquid nitrogen, thus creating extra weight. Not being a scientist, I take their word for it – whatever the reason, the hoverboard is back up and running and we’re getting ready for that impossible jump over the car. Rehearsals go well – lots of falling over, lots of perfect landings with the production and agency crowd whooping like crazy. Now to film it for real. 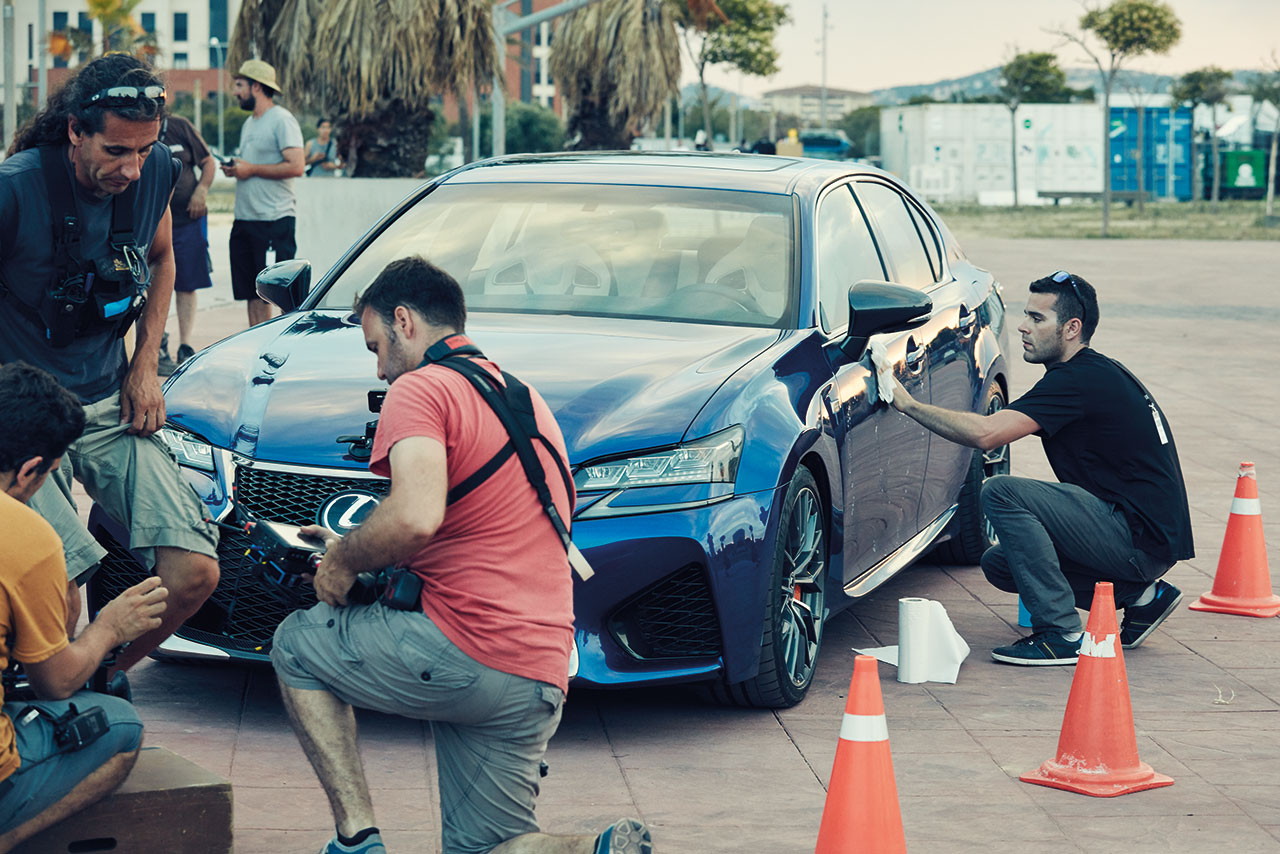 Six cameras: our Simon on the top of the jump with Nacho and Ross, Ben in the car with a 5D, the octocopter, GoPros – the toys are out in force. The first couple of attempts, Ross falls. The tension is building – and when Ross takes a tumble the third time, he doesn’t get up straight away. Paramedics run out but, before they reach him, Ross gets to his feet and brushes himself down. He wants another go.

And this time he nails it: perfect – sailing over the car and landing on the other side. You can see his grin from hundreds of feet away. Everyone goes crazy. I can’t begin to describe the teamwork and camaraderie.

The final shot of the day. A beauty shot of the car, going through the jump with Go-Pros attached to bonnet, side and wheels. We’re just turning over, everyone’s in position, Ross poised one last time at the top of the ramp when the DoP bellows: "Will someone get that cheap tourist off my set, NOW!" And wandering through the middle of the set in just his swimmers and flip-flops, fag in hand and towel tossed casually over his shoulder, is none other than our esteemed chief executive Nick Howarth. This is indeed a very special shoot for everyone.

Zoe Barlow is the head of broadcast at CHI & Partners