Event takes a look back at some of Secret Cinema's experiential triumphs, ahead of its impending summertime production of Star Wars: The Empire Strikes Back.

Designed to target families, Secret Cinema attracted around 14,000 attendees to its recreation of the 1984 film Ghostbusters. A 1959 Cadillac Miller-Meteor ambulance and the giant Stay Puft Marshmallow man were created for the performance at Troxy in London, while the cast of actors performed a choreographed routine to Michael Jackson’s Thriller as the credits rolled.

Fabien Riggall, founder and creative director of Secret Cinema, told Event: "Ghostbusters was the beginnings of catering our productions for younger audiences. Kids go crazy over immersive theatre and the Secret Cinema concepts are inspired by films from our childhoods."

Secret Cinema Presents Back To The Future was the event that nearly never happened. A dispute with the local council meant the opening week was postponed entirely.

Yet, although a raft of ticket-holders took to social media to voice their disappointment and anger, Secret Cinema re-allocated tickets and, when the first event finally took place on 31 July, it was hailed as a success by guests and critics. The event featured the recreation of the film’s 1950s town of Hill Valley, which included a high street, fairground and even a petting zoo. 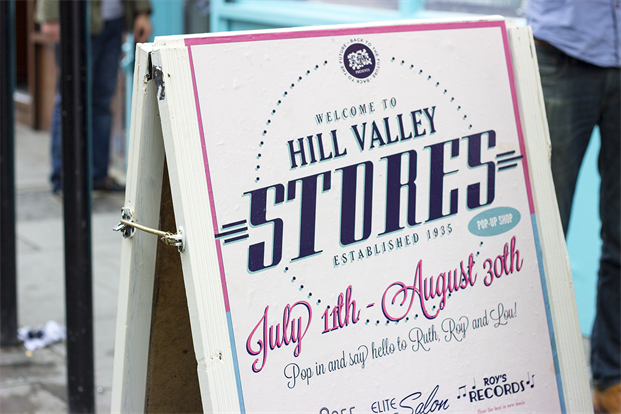 To promote the Back To The Future experience ahead of the main event, Secret Cinema transformed two shops on London’s Hackney Road into vintage Hill Valley stores. The outlets were transformed into Lou’s Café, beauty parlour Elite Salon, Roy’s Records, Ruth’s Frock Shop and the Hill Valley post office.

Guests were offered espresso martinis and strawberry-flavoured cocktails and milkshake at the diner. In Ruth's Frock Shop attendees were able to peruse and purchase vintage-style outfits, and receive makeovers at Elite Salon before writing postcards home in the post office.

There was no bubblegum or Hewey Lewis and The News at this event, which invited guests to the secret location through ‘Court Summons’ rather than tickets. Participants dressed in vests and long johns, were ordered onto a bus with blacked-out windows, and were able to explore the prison setting complete with communal showers, locked cells and a canteen.

Beer and whisky was available in exchange for library cards and choreographed flash-fights took the place of a choreographed dance routine.

Jumping on the back of Sony’s decision to postpone screening The Interview over political strife, Secret Cinema was swift to organise a simultaneous protest screening of Charlie Chaplin’s 1940 film The Great Dictator. Venues in New York, Los Angeles, San Francisco and Rome held events alongside Troxy in London.

More than 2,000 people attended the screenings and were encouraged to dress somberly in dark suits. Alongside the screening of the film, which sees Chaplin portray a thinly-veiled version of Hitler, the events featured poetry readings, music, short films and live jazz.

Secret Cinema departed from its cult classics roots by hosting an immersive performance of Wes Anderson’s 2014 film. Guests dressed in 1930s attire and checked in to the film’s namesake accommodation, where they were free to explore bedrooms, lobby and even its spa.

Stylish cocktails were available at the bar, while the restaurant served up eastern European cuisine.

The group turned their backs on Hollywood entirely in 2013 with the first Secret Music gig. Created in collaboration with singer Laura Marling, the event took place across multiple rooms and featured dancers, projections and actors, as well as a performance from Marling.

Read Event's in-depth report into Secret Events, including How to plan a secret event and a case study on Secret Cinema's Back to the Future event.

Secret Events: Secret Cinema Presents Back to the Future