Films and books do a great job of romanticising gambling, drugs and alcohol. So advertising must be at least as compelling to prevent that behaviour, says 18 Feet & Rising's executive creative director.

Let’s face it: gambling, sex, drugs and alcohol are all vices that are as old as human kind itself, with books and movies often painting these behaviours in a fun and aspirational light. I think of Fast Eddie in The Color of Money saying, "Money won is twice as sweet as money earned".

Or Hunter S Thompson’s daily routine, shown reported here below and shared millions of times since its publication in 1993. 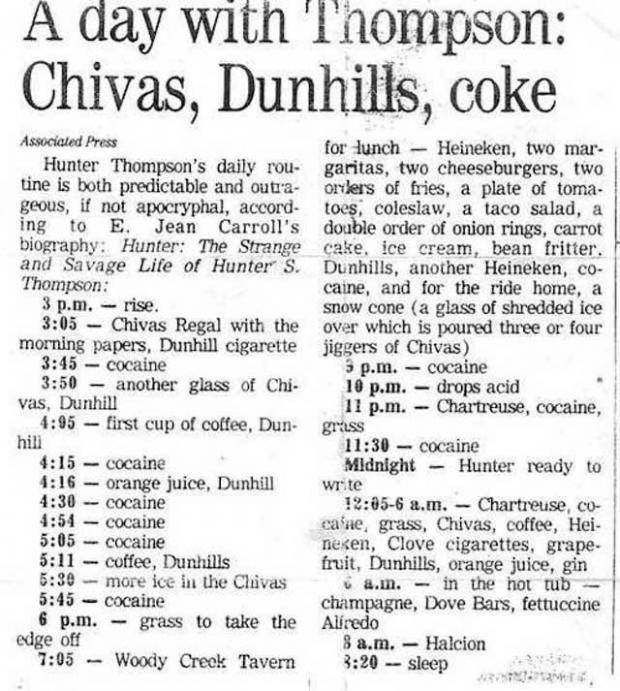 It seems like all the cool people are drinking, smoking, taking drugs, driving fast cars, having loads of sex and gambling with big money. Sometimes, they do many of these things at once. We are all attracted in some way to that rock star lifestyle – even if you are a just an 18-year-old kid living in your parents’ two up two down in Hull.

The trouble is, the movies, the books…. they do a great job of drawing us into a world away from our own, and sometimes that serves to romanticise what’s actually damaging behaviour. So as advertisers we have to be at least as compelling – if not more so – if we want to reverse, or better still prevent, that behaviour.

In this sense it’s unsurprising that the government’s anti-drug campaign "Talk to Frank" produced no tangible evidence that it had ever worked.

It’s because it was too direct. It wasn’t intriguing enough. Addictions, for example, are complicated. But often the messages used to encourage us to change are all too simple, and don’t drill down into the root cause of our behaviour.

Here’s a handful of end lines that illustrate this:

YOU BOOZE - YOU CRUISE - YOU LOSE.

RETHINK BEFORE YOU DRINK.

COCAINE! IT CAN COST YOU YOUR BRAIN.

The government is particularly obsessed with this kind of behavioural marketing. I get it, a, b, c, d – but there’s also a cost-cutting agenda here that completely overlooks the fact that audiences need priming. Because making better choices about how much we drink or gamble, or deciding to put down our phone when we drive – it’s just not as simple as choosing one brand over another.

Having recently worked on campaigns for BeGambleAware, I’ll use gambling as an example of what we were up against.

We know that humans get endorphins from seeing flashing lights and spinning wheels. Barbara Windsor’s big beaming face and bubbly voice on the Jackpot joy ad makes me want to reach for my laptop and have a flutter. A big spinning roulette wheel with a £88 FREE. NO DEPOSIT NEEDED message makes me want to bet on today’s footie match. And especially with sports, gambling becomes an extra fun thing on top of an already fun thing.

Add in then a whole host of personal issues with finance or mental health that can draw people towards overindulging in this type of behaviour, and we’ve got a real job to connect with that root feeling that pushes a person towards gambling, and to unpick all the work some irresponsible gambling advertising does to play on that.

Which is why when it comes to making people more aware of negative behaviours, leading with advertising creative designed to crash through everything else out there and create real behaviour change stands more of a chance than a "Talk To Frank" style nudge. The ideal behaviour change is that the behaviour never starts in the first place. So reaching people and helping them be aware of the risks is prevention.

With "Voices" we aimed hard-hitting work at a young audience. It was designed to be gritty and for the characters, narrative and production all to be developed in a way that went beyond being an ad and felt more like a film. It had to hit home and stay there.

Another recent PSA that I think connects with its audience brilliantly is FCB’s #ItCanWait campaign that ran in South Africa. It starts with a montage of clips of people tripping while texting and walking – the kind of slapstick content that we know young people love to watch. Then the message "You can’t even text and walk…" cuts us to a clip within a car of a young woman texting, driving and crashing "…so why do you text and drive?" It works because it masquerades as familiar entertainment, before deftly pointing out the vast chasm between what people understand about texting and driving, and how they behave.

Let’s be clear, as advertisers we should always be looking to come up with creative ideas that inspire, entertain or perhaps even shock our audiences, like all the very best of any content out there does. But, when we’re dealing with public service campaigns that tackle such important and nuanced issues as some of the ones I’ve discussed… we’ve got an even bigger job on our hands, which is setting the strategic sights firmly on awareness of self, not just awareness of a campaign.

Epidemic of gambling ads in day-time TV is irresponsible