The movement of football players is converted into electricity that powers the floodlights of a state-of-the-art pitch in the heart of a Rio de Janeiro favela for Shell's #makethefuture programme.

The previously derelict pitch was already a key part of life for local residents of Morro da Mineira, but Shell has refurbished it with 200 underground tiles that converts and stores the kinetic energy of players into electricity.

This is combined with solar-generated energy and used to power the overhead floodlights.

The project, which took 18 months was unveiled last night (September 10) in Rio, with Pelé on-hand to give his support.

He said: "Football is Brazil’s biggest passion and the sport has gone through so much technological innovation since the last time I played. 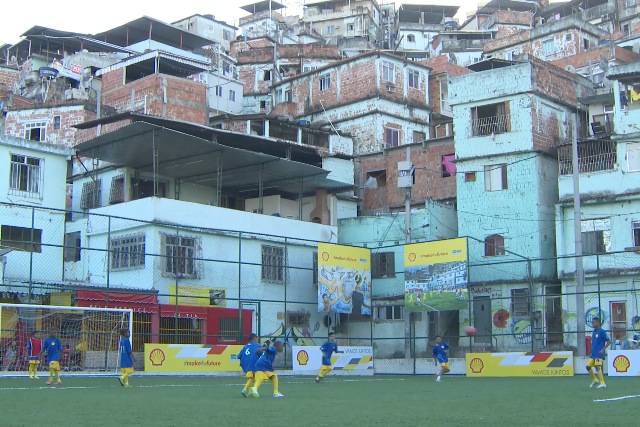 "This new pitch shows the extraordinary things possible when science and sport come together," he added.

The initiative is part of Shell’s #makethefuture programme, which has been devised to encourage young people to consider science and engineering as a career, and in particular develop new means of producing renewable energy.

How Shell is turning sandbags into electricity in Kenya

Pele sues Samsung for $30m over use of lookalike in ad... and more

Greenpeace campaign highlights Amazon and Twitter's use of 'dirty energy'

Samsung extends Olympic sponsorship beyond Rio 2016 and into 2020