It is billed as the largest human migration event of the year and despite concerns of a spreading virus outbreak and a softening economy, millions of Chinese are expected to head home to celebrate the (new) year of the rat. However, the concept of home may be shifting—according to a study from UM China and ByteDance’s marketing service brand Ocean Engine—with people now comfortable bringing their parents to their urban homes or taking their entire families on group holidays to ring in the new year.

For marketers used to targeting the migrating masses, these shifts pose new challenges. "The challenge for them is to capture local nuances in each region of China and build their strategy around each of them," Lin Liu, strategy chief for UM China, told Campaign Asia-Pacific. Rather than treating these millions of travellers as one homogenous mass, opportunities are emerging in specific age groups and geographies in China. 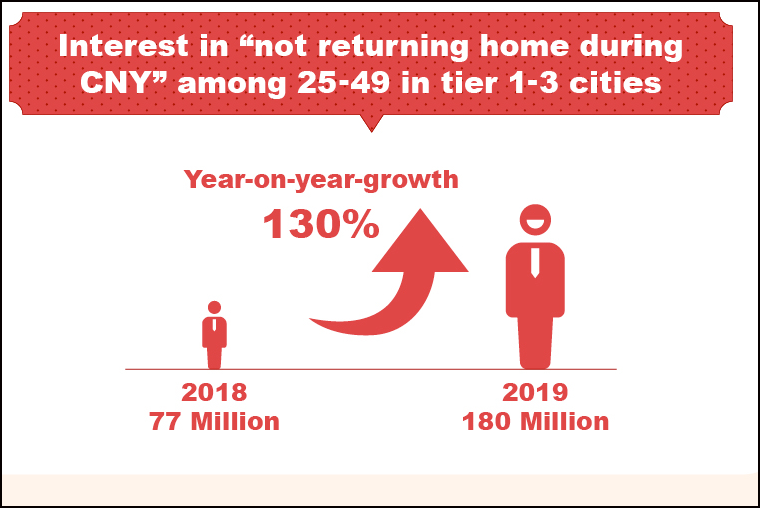 These were some key findings from a study by UM China strategy team led by Liu, in collaboration with ByteDance’s marketing service brand Ocean Engine.

For instance, in the Beijing-Tianjin-Hebei region, older people searched more for content related to retirement. However, in the Pearl River Delta, the party capital, the focus was markedly different, with many youngsters who may not have headed home trying to zero in on an unmissable public celebration. "Regional cultures and flavours are all exciting opportunities for marketers," Liu added.

Some of these changes signify a country in transition. For decades, going home for the new year implied urban workers and their families headed back to lower-tier cities or rural areas to reunite with parents and extended family for a celebration. "The question is what do people do during CNY—they are very ambitious for sure and that’s visible in some places, such as parents in the Yangtze River Delta who are fervently checking out educational programmes for their kids at this time," Liu notes. "Even at a time when people are meant to relax, they are working even harder." 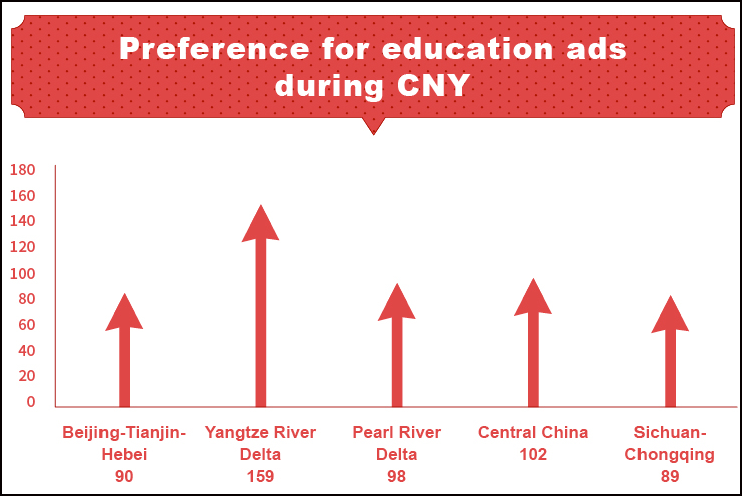 One reason more people are bringing their families to them rather than going home: as the country has changed, urbanised and developed, people with more disposable income have upgraded their homes. And larger, nicer homes means it makes more sense to bring the parents to the city instead of vice versa. Growing incomes have also meant getting together with family is now a moving target, with more Chinese hitting the road during the festive period.

These changes have also meant changes in the Chinese social structure, with inevitable tensions ensuing, for example, between couples, when both partners have worked long hours until this time and are finally taking a break. "You feel like you have to get together (with family), but there is a lot of tension too," said Liu. "Advertisers need to focus more on the themes of love, reconciliation and hope in this time." 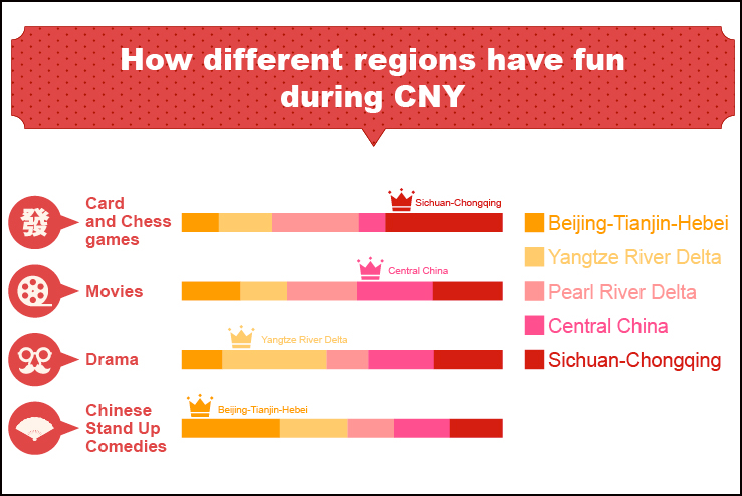 Despite these shifts, marketers and advertisers aren’t changing fast enough – by and large their narratives focus on the old tropes of people going back home. While these originated at a time when struggling workers in cities eagerly looked forward to their CNY breaks, it may be time for a change.

She mentions two campaigns that highlight the changing landscape in China. The first Alibaba’s What is Pei Qi was a wildly popular five-minute video for last year’s new year that tried to bridge a yawning generational gap between a clueless granddad and grandson (see "'What is Peppa?' trailer injects much Chineseness into British cartoon"). The second from Olay, relaunched its anti-ageing creams in China. "These campaigns hit a raw nerve with Chinese consumers and give marketers a strong sense of where to go with their CNY plans this year and in the future," she adds.

There are big festive opportunities for brands beyond Christmas

Four truths about China from an adland expat