Edwards’ differentiating strength is his deep understanding of what makes people tick; not only the consumers he targets with his campaigns, but also his fellow team-members and external stakeholders.

It’s these exemplary people skills that helped propel him to success when overseeing the launch in early 2014 of Robinsons’ pocket-sized, concentrated drink Squash’d in the UK, the lead market for the brand,
which rolled out across multiple territories.

He was instrumental in growing the brand by £8.5m in under
12 months and creating a category now worth £15m.

Getting the best out of his team and network was a focus for him throughout the launch: "Creativity is so important because we have to cut through so many messages today. If you want the best work from people, being a supportive leader is really important." 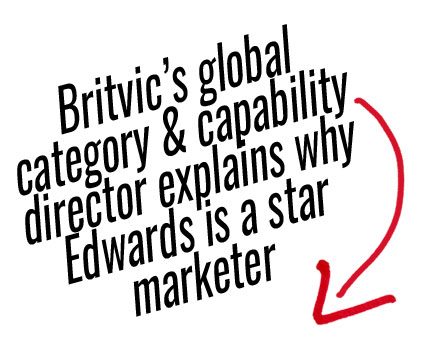 Edwards tries to cultivate agency relationships that engender the feeling they can run any idea past him – which is how Squash’d came to launch in zero gravity.

Following the hype surrounding the release of Hollywood blockbuster Gravity in late 2013, this seed of an idea led Edwards to back agency Iris’ proposal and challenge visual-effects firm Framestore to prepare a drink of Squash’d in zero gravity for its launch campaign.

The daring move paid off, with consumer testing showing that the Squash’d ad scored more than 80% in the awareness index.

For me, the important thing is working on brands where I’m able to make a difference

"My instinct is to approach marketing scientifically, but I’m developing my creative side. Because you can be as scientific as you like, but the creative side can have a massive effect on the effectiveness of the work," says Edwards.

"And creativity is a catalyst; it brings people together. We did a big internal launch with everyone, including the board, and played the video. People were clapping, impassioned and excited.

They weren’t talking about the numbers, but about what we’d collectively done in bringing Squash’d to market."

Edwards describes his career as half-planned: he wants to lead and inspire a big team, potentially abroad, but does not have his eye on any particular role yet. "For me, the important thing is working on brands where I’m able to make a difference," he says.

His pride in Squash’d also succeeded in building colleagues’ and customers’ passion for the brand. What really sets him apart is his positivity and drive.

He’s also highly collaborative; his strong relationships with colleagues and creative agencies are testament to that, and helped achieve the accelerated launch of Squash’d.

Simon is widely regarded as a rising star within Britvic and has been recognised as a ‘Britvic Star’ two years in a row by colleagues who have cited his exemplary ‘winning together’ attitude."

Be a one-hit wonder: 5 things I wish I'd learned earlier in my career

Six reasons why I chose to become a marketer