This is a lesson in how not to manage a crisis.

In 2020, when advertising standards have never been higher, there's the occasional brand that still finds itself floundering to avoid damaging racial and gender-based stereotypes.

A most recent example is Singapore-based start-up Tutoroo, which offers private language-tutoring services around the world. It recently posted an ad on Twitter whereby a Causasian British man asks a Chinese woman for her number and miscommunication ensues.

From the point of view of East Asians who are already at the brunt of bigotry and microaggressions in countries where they are minorities, no-one is laughing.

"The ad reproduces harmful, long-standing stereotypes that are racist and sexist," Tam Hau-Yu, writer, researcher and campaigner based in SOAS, University of London, told Campaign Asia-Pacific.

"The ad is told from a white male gaze and reinforces the superiority of the English language," Tam added. "And this is juxtaposed against stereotypes of East Asian female exoticism, sexual desirability and availability, as well as the 'essential' laughability, crudeness and otherness of Chinese languages for good measure."

A British guy asks a Chinese girl for her number, here is how she answers.

Context should always come first when it comes to portraying race and gender in ads, Tam said. At the moment, she added, her experience as an East Asian is particularly vulnerable amid reports of casual racism in London due to the coronavirus outbreak.

"Context matters," she said. "Let’s just focus for a moment on how Sinophobic our world continues to be in the wake of the coronavirus. In the end, this ad legitimises the casual racism I face at work, my place of study, online and in my personal life, especially right now.

"This brand should listen, reflect and give complainants a channel to air their views," Tam continued. "What I have seen instead is a juvenile doubling down of the posts and ignorant retweets, which taints my low opinion of the company even further."

As users complained about the ad, the brand continued to mock those who were offended and inserted eye-roll gifs to emphasise its indifference.

"When content goes wrong, like this has, brands need to listen to their audience and respect what’s being fed back," Lee Nugent, executive vice-president and regional director at Archetype, said.

"If you’ve got it wrong, put your hands up and say so, and put processes in place so that it can’t happen again," he added. "If you truly don’t believe you have got it wrong and elect to ignore your audience when they disagree, then be prepared for the consequences of backlash. Social media has a long memory."

Tutoroo used its official brand voice to say that "no-one was offended" when the video was originally posted on Facebook a year ago. But Nugent argued that this type of language is damaging.

"A human tone that is authentic to the brand is important when responding to feedback on social platforms; but it’s even more important that being ‘fun’ doesn’t step into being disrespectful," Nugent said. "When the brand here says ‘no-one got offended’, they are wrong. Plenty of people got offended – and understandably so. And just because others ‘liked’ the content, that doesn’t mean it’s not offensive to many.

"In reacting to the comments on Twitter, the brand does itself no favours with some of the responses posted. The defensive position it takes only fans the flames. Good crisis management should take the sting away; this just makes it worse."

The campaign was presumably created to drive engagement, affinity and ultimately some sort of transaction, but it missed the mark, Nugent said: "Instead, it’s clearly damaged the brand’s reputation and the responses to the comments have exacerbated the issue. A smart response now would be to withdraw the content and apologise."

In another piece of promotional material on Facebook (pictured below), Tutoroo uses the words "woman" and "noisy" in Japanese side by side to reinforce yet another age-old stereotype about women.

However, a native Japanese-language speaker called out the brand for the mistranslation of the word "noisy", pointing out that the Japanese version of the word could mean "rape" instead. Tutoroo responded by saying the commenter was "overthinking" it and that "the words are what they mean". 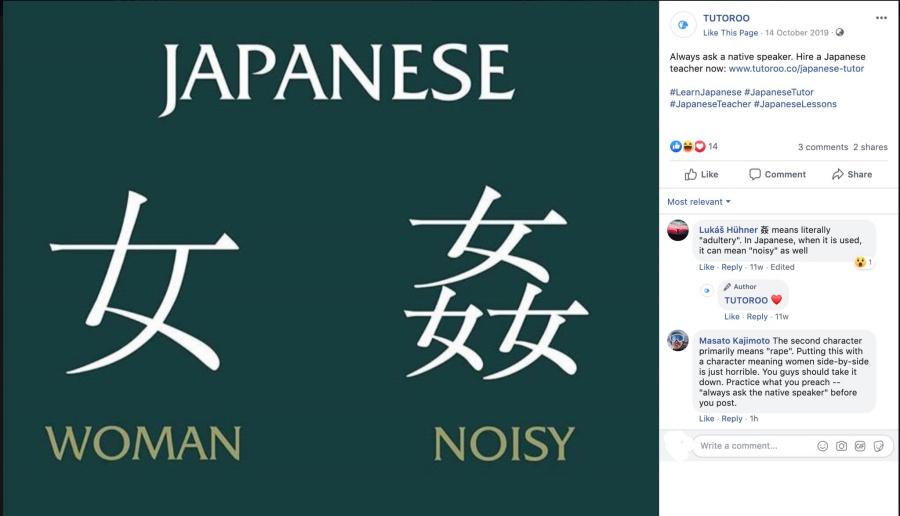 Here's the response I got after my initial comment. I also decided to ignore them. I have better things to do in life and giving them unwarranted attention is perhaps not the right strategy here. @jenniferlywang pic.twitter.com/1UoEwQuRAe

There hasn’t been an apology from Tutoroo despite continued backlash. In fact, founder Nicolas Vanhove also uses his personal account to defend the ad: "This video is in no way racist. We truly believe it is funny to make fun of any accent: Chinese, French, Indian, German, Dutch, Arabic… or Hebrew. More videos to come, soon! If you don’t like it, skip it."

We haven’t yet seen an ad from the brand making fun of British or US accents.

Has writing in advertising turned B&AD?