The success of the Red Bull Stratos project underlines a broad cultural shift in marketing where brands are attempting to improve society, not just their bottom lines, writes Nicola Kemp

It was a greater feat than any 30-second spot has ever achieved: skydiver Felix Baumgartner dropped from near-space (23 miles high) back to the Earth’s surface.

It was an astonishing display of the value of human endurance, of adventure, investment and commitment. The fact that this mission to the edge of space was, in fact, funded and created by a brand is, quite simply, remarkable.

Having achieved 8m concurrent views of the spectacle on YouTube, there is no arguing that Red Bull’s Stratos project was an astonishing leap forward in marketing, but it also delivered something far bigger than eyeballs.

The fact is, a brand both created and funded a mission to the edge of space that will create data and insight that could benefit NASA. As one viewer tweeted: ‘That awkward moment when you realise an energy drink has a better space programme than your nation.’

Stratos was not a CSR project, but is far more than a marketing campaign. While commentators have already waxed lyrical about it as the very pinnacle of content, marketing experts believe that this diminishes the scope of the achievement.

James Murphy, editorial director at the Future Foundation, says Stratos shows that Red Bull isn’t solely a provider of content anymore. ‘This is the purest example of the brand as a story; the brand itself has become content,’ he explains. Murphy believes the scientific and technological pay-off of the campaign reflects a level of sophistication that conventional CSR couldn’t reach.

1. Embrace a sense of purpose

‘Do you want to sell sugar water for the rest of your life, or do you want to come with me and change the world?’ Steve Jobs’ pitch to John Sculley – the Pepsi-Cola CEO whom Jobs brought in to run Apple – probably wouldn’t wash with Red Bull founder Dietrich Mateschitz.

Red Bull Stratos has not only underlined the brand’s authentic link to extreme sport and innovation, it has also provided its employees with a motivation bigger than selling sugar water (or energy drinks for that matter) for the rest of their lives.

James Whitehead, executive partner at JWT – the agency that, in a clever bit of marketing, sent a Kit Kat bar 22 miles into space to celebrate fearless Felix – says people want more of a relationship with brands. ‘They want to be involved with them and share them, so [brands] need to have a bigger purpose and a conscience that extends beyond sales,’ he says.

2. Beyond Big Society: do more than grow your bottom line

Consumers may have expressed discomfort at David Cameron’s vision of Big Society, but Red Bull Stratos raises difficult questions about marketing taking off where government funding ends. ‘Red Bull has taken science forward and no one is questioning it. Whether you agree that this will benefit NASA or not, there is no doubt that it is fuelling a passion for science,’ says Sav Evangelou, executive creative director at Kitcatt Nohr Digitas. He believes there is a huge opportunity for brands to carry this shift forward if they can share knowledge or deliver progress to society, whether it is through education or investment.

Sean Kinmont, managing partner, creative director at 23red, says the main thing marketers can learn from Red Bull Stratos is that ‘higher order’ benefits can be generated by things other than charitable links or associations with good causes. ‘People can be equally inspired by feats like this one, which take them vicariously into self-realisation, courtesy of the brand,’ he says.

Space exploration appeals to noble human interests: the desire for adventure and a belief in the power of science. James Kirkham, managing partner at Holler, says that for a certain generation Stratos has become an ‘I was there moment’, which has created ‘almost an unfair benchmark’ for marketers.

While media coverage has focused on the volume of You Tube hits, the true scope of Stratos’s achievement reverberates far beyond the marketing fishbowl. In fact, Red Bull itself has blocked agencies involved in the project from talking to the press because it doesn’t want the event to be viewed as a marketing stunt.

‘The industry is obsessed with media coverage, but the real opportunity is earning the right to speak to consumers. Red Bull did this by capturing the imagination of millions of people,’ says Evangelou.

The message is clear: to be truly great, brands must transcend ROI. 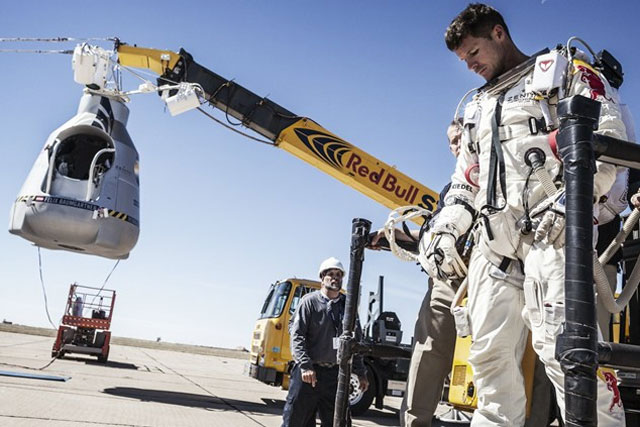 Of course, not every brand has a fearless Felix to deliver moments of greatness, but you cannot ignore the pace of change in the market. Rewind to 2008, when Honda secured reams of coverage with its live sky-diving ad on Channel 4. However, chances are you probably cannot remember the ad, and it is unlikely to grace the pages of history for delivering anything other than PR for Honda.

Russ Lidstone, chief executive of Havas Worldwide London, says that with Stratos, Red Bull has in effect created a school of Œextreme marketing¹.

Red Bull has built credibility through its support for extreme-sports athletes, the creation of current F1 champions Red Bull Racing and through building a range of events from the ground up. In short, Red Bull could never be accused of simply badging events.

The Stratos project also hints at a wider shift in marketing in the digital age: it is no longer enough to obsess over brand valuation and image. Consumers are increasingly demanding that brands prove their worth, a shift that has huge implications for marketers.

Patricia McDonald, executive planning director at Glue Isobar, says that in an age of participation, brands are facing up to a fundamental shift. ‘Brands need to ask themselves what they do for people. It is bigger than marketing: from supply chain to distribution, it’s the fundamentals of how a business behaves,’ she says.

The world’s greatest brands have changed consumer behaviour not just to boost their own bottom line, but to actively improve people’s lives. This is typified  by Nike, which created Run London and has invested in giving people greater access to sport, in an effort to tackle the growing problem of sedentary behaviour, arguably one of the biggest challenges of our time.

Lisa MacCullum Carter, managing director of Access to Sport at Nike, says: ‘Underpinning the London Olympic Games was a commitment to ‘inspire a generation’. Although elite and professional sport can inspire and encourage young people, it cannot on its own increase participation levels and access. Funding is crucial, but effective change will require unprecedented collaboration and action from governments, communities, corporations and civil society.’ Many analysts believe this collaborative approach will underpin the future of marketing for good.

6. Place commitment above all things

Back on Earth, there will doubtless be marketers rolling their eyes at the notion that they should ‘pull a Red Bull’. So here is the killer fact to empower each and every marketer: experts estimate that Red Bull’s investment in marketing is 30% to 40% of its revenues. It is a marketing-driven business model in the truest sense. If you won’t invest in your products and services, staff and brand, why would you expect your consumers to? You can’t use the struggling economy as a one-size-fits-all explanation for failing to commit and perform.

In an age of slash-and-burn marketing, where failure to commit and endlessly delaying big decisions is the norm, Red Bull’s investment and scope is noteworthy. Not every brand has the inclination or budget to invest in something bigger than itself, but the best marketers should at least have the ambition to try.

Red Bull Stratos' Felix Baumgartner: 'We definitely owned the internet on that day'

Tuning Out: Why brands need to disconnect and embrace the new simplicity

Why brands must act as editors

Nine rules of engagement in the social validation economy

Topical and tactical: the rise of the 'newsjacking' ad campaign

Why a natural disaster is never a marketing opportunity

What brands should know about instant gratification

Think BR: The new role for brands in sponsorship