The partial solar eclipse is set to plunge the UK into darkness tomorrow (20 March), so make the most of the natural phenomenon and head somewhere special to (indirectly and safely!) watch it happen.

Activities at the venue include Eclipse Central, where guests can take part in eclipse-related experiments; Launch Pad, which will train participants to become astronauts; and Mission Control, where guests can learn to code with Dr Who.

Sinead Rocks, head of BBC Learning, said: "Over the years, we’ve worked with partners and astronomy groups across the UK to capitalise on the interest that the TV shows create by giving thousands of people opportunities to get actively involved with astronomy. This March, we’ve got the added bonus of a solar eclipse to kick-start our flagship event in Leicester as well as an ambitious nationwide project to get schools involved in a live science experiment."

Up at the O2, London

The O2’s roof climb experience hosted a Twitter competition to give 20 people the chance to view the eclipse from 52 metres in the air, harnessed to the domed building. 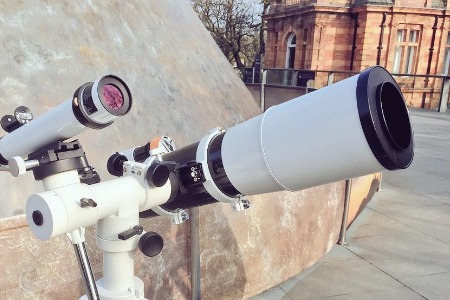 Those not brave enough to climb The O2 can head down the road to the Royal Observatory in Greenwich, which will be opening its doors early at 8am to allow visitors to watch the phenomenon happening alongside professionals. Telescopes and specialist equipment will also be available to try.

After it’s over, guests can head to the planetarium to watch Dark Universe at 2.45pm, a new show exploring what we know and don’t know about the structure and history of the universe.

This quirky Scottish venue will also be opening early at 8.30am to project the solar eclipse onto the round viewing table. Camera Obscura is located inside a Victorian rooftop chamber and uses a giant periscope to showcase the city to guests.

Andrew Johnson, manager of Camera Obscura, said: "This is the first time in my lifetime that we may have the opportunity to see an almost total eclipse on our camera obscura table. This is truly the best way to view it, as it is perfectly safe, and not obscured by anything.

"The last time we had a partial eclipse the experience was incredible. Given clear skies, this will be even more so."

Birmingham Cathedral and its gardens on Colmore Row have teamed up with the Birmingham University Astronomers and the Lunar Society to offer a tranquil setting to watch the eclipse. Professional astronomers from the academic institute will be on hand to provide expert advice and information.

The event will also act as a launch to the cathedral’s 300th anniversary arts series.

If your boss won’t let you leave the office, load community observatory Slooh.com up from 8.30am to watch the event unfold across the globe.

Dine out: new eateries to taste-drive