On the eve of Movember the world of media took over a Covent Garden barber for The Shave Down. Men and women from media gathered to either get their final shave or support their agency peers (or both) and celebrate the charity's important work

This year Campaign has introduced the M-List, a list of industry taches, grown specifically for Movember, to raise awareness and donations for The Movember Foundation.

On 31st October, the world of media gathered at Cut & Grind barbers for the Shave Down. NewsUK, Campaign and Movember invited men and women from media and beyond to get their final shave, and celebrate The Movember Foundation’s important work.

If you couldn’t make it on the night, fear not. We’ve compiled a list of the six top moments – and it’s definitely not too late to get involved or support our M-List Mo Bros.

So here's what went down at The Shave Down…

1. Mario Falcone got a shave
Fans of The Only Way is Essex know its long-standing star Mario Falcone as a lothario on the show. We saw a different side to him at The Shave Down. As his shave was live-streamed on Facebook, Mario explained to The Movember Foundation’s CEO, Owen Sharp, how five years ago he started to struggle badly with mental health issues. They are an "ongoing battle" for him.  He wants to highlight the topic of mental health as one which men must feel more open about.

Mario explained that he "felt weak" when his mental health deteriorated. He credits his recovery to finally feeling like he could talk to someone about the problem, and encourages other men to speak up when they are not feeling fine.

2. We said 'bye' to the beards
The Movember rules state that each Mo Bro must begin the 1st November with a clean shaven face. No surprises that many of the media Mo Bros arrived with some impressive (and clearly much-loved) bristles. But despite some nerves, all the Mo Bros (special mention to Carat’s Stewart Collin) sportingly allowed the barbers to give them a full wet shave, complete with hot towel treatment and massage. We saw some pretty impressive razor skills.

This month, the media mo takes over.

5. Everything had a mo (even the wall)

6. We listened
Movember is a fun way to highlight a serious issue: men are dying too young. The Movember Foundation addresses some of the biggest health issues faced by men, including prostate cancer, testicular cancer, and mental health and suicide prevention.

Feeling able to speak up when you don’t feel fine is absolutely key to tackling the issue of mental health.

At The Shave Down we raised awareness and shared stories. The room was full of people from different agencies and age groups, all united to support the cause.

To get on the Campaign M-list email movember2017@news.co.uk and we'll register you 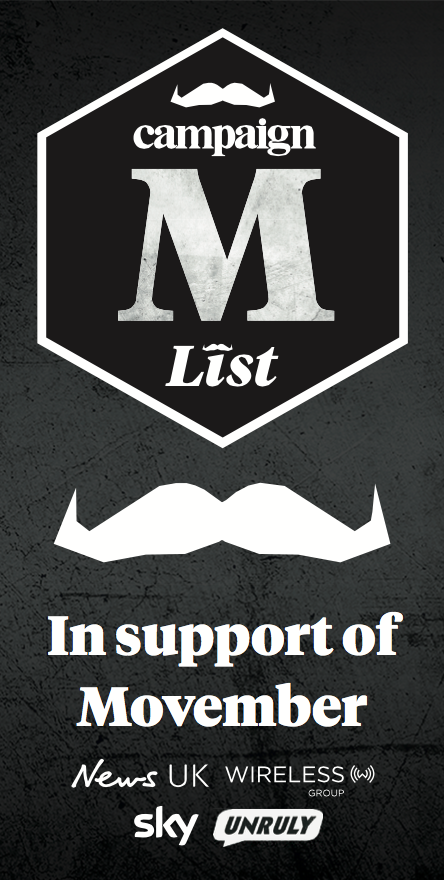 Six things that went down at The Shave Down

"My fear is that I'll look like Nigel Farage with a tache": Meet the Mo Bros (part 2)

Mixing with the media mo: the Campaign M-List