Sports Direct has launched a campaign for the tennis ball manufacturer Slazenger, as Wimbledon fortnight gets underway.

The concept of the ad, created by Antidote, plays on the fact that Slazenger has been the official ball supplier to Wimbledon since 1902, a 112-year partnership, which the company says is the longest in sporting history.

The ad features a Slazenger tennis ball in motion on course for the baseline of a tennis court with the copy, "the focus of every point since 1902".

Tim Ashton was the creative director, art director and copywriter for the ad, while the planner was Paul Shearman and the producer was Stephen Yeates. Sports Direct bought the media itself.

Henry Chilcott, the managing director of Antidote, said: "Occasionally, an agency’s role is simply to shine a light on a story that hasn’t been told. Slazenger’s partnership with Wimbledon means that for 112 dramatic years, the eyes of the world have been focused on one ball."

The ad will run from this week on billboard posters in the London area, digital banners, in Sports Direct shops and on the outside back cover of the Wimbledon programme for the two weeks of the tournament.

Vincent Smith, the associate director of Sports Direct and Slazenger, said: "We’re very proud of our relationship with Wimbledon – at 112 years, we’re the longest partnership in sporting history – so we wanted to celebrate this in a simple and confident way." 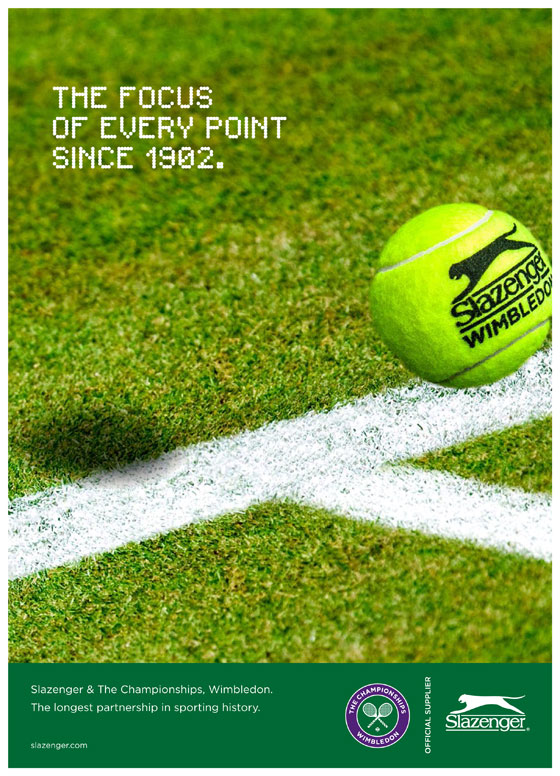 Stella Artois "the perfectionists" by Mother