Snap, the parent company of Snapchat, increased losses by 44% year on year in the fourth quarter, weighed down by a $100m one-time charge to settle investor claims that the company didn’t properly disclose the impact on its business from competing with Facebook.

For the fourth quarter of its financial year, Snap's losses swelled to $241m, as the company struggled to find a path to profitability two years after a messy initial public offering.

Revenue for the three months rose by 44% to reach $561m, compared with $390m in the same period in 2018. During the quarter, Snap saw revenue growth across its reported geographies, with North America, Europe and the rest of world categories up 42%, 47% and 49% respectively.

The company's share price fell more than 13% in after-hours trading.

"We believe that the best way to build a global business is to invest in products and partnerships that are locally relevant and reflect local culture, while reducing the barriers to using Snapchat," Evan Spiegel, Snap's founder and chief executive, said on a conference call. "Visual communication is a high-bandwidth activity that can be burdensome in markets with limited and expensive cellular internet."

The company has worked with more than 70 cellular carriers to cut these costs and these ongoing efforts have helped cut Snapchat’s median cellular data usage by half in the past six months, the company said. 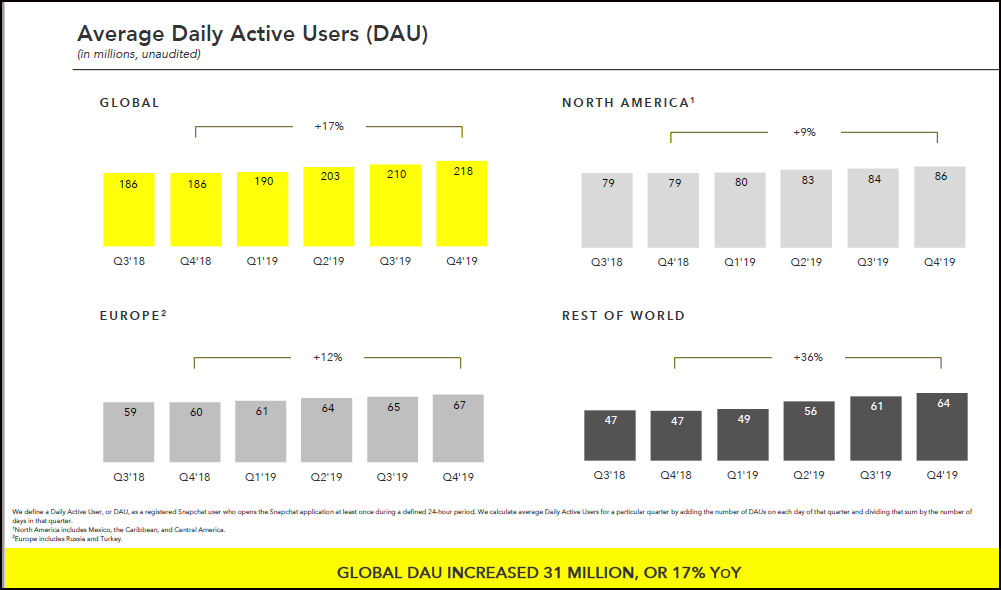 Daily active users to the Snapchat app increased by 31 million in the fourth quarter, driven by a 36% increase in the rest of world region, even as new users in North America grew just 9%. To try to compete in a tough market, company executives on the call said it is focusing its efforts sharply on identifying and marketing to a unique audience.

This growth was likely due to the launch of a revamped Android app, eMarketer principal analyst Debra Aho Williamson said: "Snap has also been a standard-bearer when it comes to new ad formats, such as augmented-reality advertising, and those features are attractive to some advertisers."

In the US, Snapchat reaches more than 90% of 13- to 24-year-olds and more than 75% of 13- to 34-year-olds, Jeremi Gorman, Snap's chief business officer, said on the call. "Our community engages with our service for over 30 minutes per day on average and our advertisers have unparalleled reach with the valuable 13- to 34-year-old demographic that makes up the majority of millennials and Gen Z."

To drive advertising revenue growth, Snap has launched solutions that lean on its content and AR platforms in order to drive better outcomes for advertisers. Video is a top priority and the company has started to scale Commercials – its six-second, non-skippable, full-screen video format – and Snap Select, which enables fixed cost per mille buying of Commercials in pre-packaged, premium inventory.

Contending that long-term brand-building on mobile remains a challenge for marketers, Gorman said Snap would use its "camera-first functionality and our Sponsored AR Lens formats" to look for new growth.

"We are at the beginning of building out our AR ecosystem for brands and providing additional value beyond paid media," he added. "For example, this quarter, we announced that McDonald’s and Coca-Cola are the first brand partners to utilise our Scan camera search technology."

Snap is putting together a team to work more closely with its advertisers to integrate these offerings.

Despite these moves, Snap has a long way to go before it can challenge Google, Facebook and Alibaba’s stranglehold over worldwide digital ad revenues. According to an estimate from eMarketer, Snap’s share was just 0.5%, with share from Google and Facebook at 32% and 21.1% respectively.

Snapchat has won back young users after 2018 Android debacle