Findings from a recent study on social media reveal that as social networks mature the individual platforms are beginning to demonstrate their core strengths, and UK consumers are increasingly differentiating them based on functions and features.

Ninety five percent of Facebook users do social activities on the site, compared to 78% of Friends Reunited users, 69% of LinkedIn users, and 52% of Twitter users.

LinkedIn is clearly an environment which revolves around work colleagues (41%), although 33% of Facebook users also say they visit the site for work related functions.

When it comes to MySpace and YouTube, it’s all about music, with 31% and 52% of users respectively there to listen to music.

And then there’s Twitter. While initially it had pulling power for a niche, media audience, this 140 character universe has extended its reach; now 32% of users are there to keep up with celebs - the most common activity on the site.

Activities done on each site grouped by overall function 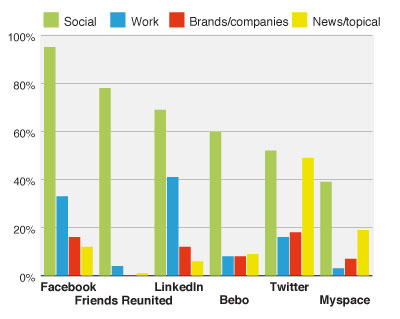 Source: YouGov Social Network Tracker March 2011. Base: Those who use social networks

However, social networks aren’t restricted to single use, and are very rich environments, according to YouGov’s latest Social Media Tracker research.

On Facebook, communicating with friends and relatives certainly dominates activity, with 84% of people using it to keep in touch with friends.

Sixty five percent of respondents use the site to stay in touch with family members, 62% to see what it is old friends are up to, while 61% are busy reading friends posts and updates, and 60% like to post comments to their friends.

Work does feature on Facebook, though, with more than one third (34%) of respondents using Facebook to follow current colleagues, 30% to see what previous work colleagues are up to, 27% to keep up with workmates' updates, and 24% logging on to post comments to colleagues.

And the Twitter platform has a fast-growing reputation for being the place to head to for the day’s news, with 30% of respondents saying that they use the short-form blog to keep up to speed with what’s happening in the world.

And friends are also important here; 26% of respondents head to Twitter when they want to stay in touch with pals, and 22% go there to read their friends’ posts and updates.

On LinkedIn, around one quarter (24%) of respondents use the online community to keep up with work-related news, while 19% read colleagues’ posts, and 14% go there to message them.

The most common activity is of course keeping in touch with work colleagues (50%).

With YouTube, it really is music which makes the website go round, with just over half (52%) of users heading to the viral-video destination to listen to music, find new tracks (24%) and to keep up to date with bands and music (13%).

Just over one in five users (21%), share music, photos and videos.

Proportion using each social network site more than once per day 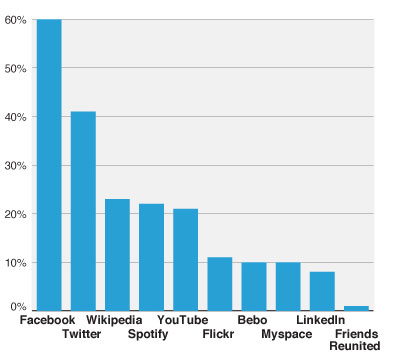 Source: YouGov Social Network Tracker March 2011. Base: Those who use social networks

That’s not to say Facebook isn’t pulling in more mature users. In fact, older consumers are increasingly to be found on the social networking scene, with 28% of UK Facebook users aged 55+.

Almost half (49%) of people in this age bracket have joined up to social networking sites over the past two years.

Length of time as a registered SNS user by age 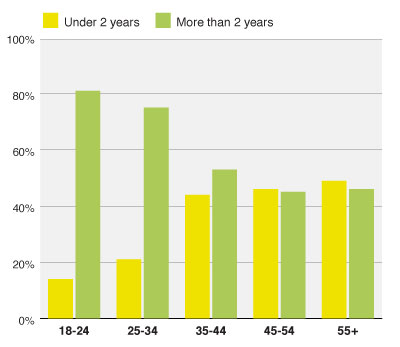 Source: YouGov Social Network Tracker March 2011. Base: Those who use social networks (n=2,113)

There are gender differences too. Women are more likely than men to access Facebook more than once a day (63% versus 57% for males), while men are more prone to head to Twitter more often than once daily (45% versus 36% for women).

Facebook users have an average of 140 friends on the online community, with men boasting more than women (151 versus 131).

On MySpace the difference is larger still (126 versus 66), while on Twitter males have more than twice as many friends as females (83 versus 40).

The gender differences continue when we look at the different topics people follow on social networks.

Women are more likely to follow fashion and beauty, while men tend to look out for music, sports, and newspapers. 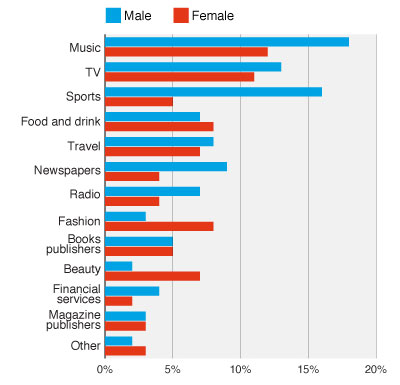 Source: YouGov Social Network Tracker March 2011. Base: Those who use social networks (n=2,113)

Think BR: Appealing to kids and selling to parents

MySpace out of top ten most visited social networks

Andrew Walmsley on Digital: Social media is not 'busted'