Sony Mobile's president, North Western Europe, Pierre Perron, is putting speed and focus at the heart of the reborn brand's development following its buyout from Ericsson.

On the wrist of the impeccably dressed Pierre Perron, president of the North Western Europe region at Sony Mobile, sits a Sony-branded watch. During the interview he whips out his timepiece and, with a boyish twinkle in his eye, starts taking photos on the new Sony Xperia S smartphone using the watch's controls.

'We don't want to be a single-product company like some,' explains Perron, in his first in-depth interview as Sony Mobile chief, following its buyout from Ericsson. 'We want to be a one "connected entertainment experience" company, which is the essence of what we will be doing, even down to your watch.'

This message is being communicated in a global TV campaign, which broke last weekend. Directed by Hollywood heavyweight Wes Anderson, it uses the imaginings of an eight-year-old boy to highlight how a Sony Xperia handset can be used to share content (see 'The Campaign', below).

'Children are the most imaginative people in the world. The brand campaign creative is making sure we inspire imagination through our products (as well as) content and entertainment capabilities around the product,' explains Perron.

Putting the brand to the fore

The campaign not only serves to promote the capabilities of Xperia, but also marks the world debut of the Sony Mobile brand - one the Frenchman hopes will re-establish the company at the forefront of the mobile market.

Under the stewardship of Kazuo 'Kaz' Hirai, who takes over from Welsh-born Howard Stringer as president of the overall Sony Group this week (1 April), Sony will concentrate on making sure the myriad business units converge properly.

This is where the watch trick comes in. 'Kaz Hirai will make sure [all] devices, whether created by business unit A or B, are created with a common ambition and strategy to provide a seamless, compatible user experience,' says Perron.

Sony Mobile will be a cornerstone of this strategy, which is built around a four-screen 'backbone' of the TV, PC, tablet and smartphone. 'This backbone is where we will be focusing a lot of our effort when it comes to our brand and marketing strategy,' he adds.

Perron acknowledges that Sony Mobile must prove itself through a solid performance. However, he believes that it is no poor relation in the context of the Sony group.

'In terms of creativity, innovation and engagement of people, I'm sure Sony has a high image of the people working in this organisation, but, like every business, we need to perform and this is the importance of a very strong marketing strategy,' he explains.

The ups and downs of the Sony Ericsson joint venture, which formally ended in mid-February when Sony completed the £920m buyout of Ericsson's share, appear, at least on the surface, long forgotten within the business' UK headquarters in Hammersmith.

For Perron, one of the instant wins of the buyout has been the increased manoeuvrability it has given the company. 'Obviously we need to act at a much more accelerated pace and since the acquisition, things are progressing very fast,' he says, emphasising his point by highlighting how the rebrand has taken less than three months.

Sony Ericsson's market share had been on the slide and it posted a £173m loss in the final quarter of 2011. However, Perron denies that the joint venture's problems were down to it being too slow. Rather, his intriguing argument is that it was its rivals that got faster. 'Our competitors did not wait for us,' he admits. 'The world is accelerating and our competitors are getting faster. We need to react and be even more proactive.'

Despite these feelings, Perron, who has been at Sony since 1989 and worked at Sony Ericsson for the duration of the venture, remains proud of the innovation it brought to the phone market.

Sony Ericsson was instrumental in integrating music into mobile phones with its Walkman-branded range. That development, he explains, opened up the mobile ecosystem by allowing consumers to copy and paste music files onto a mobile.

Perron also claims Sony Ericsson brought out the first 'touchscreen smartphone' – its P800 model in 2001 – and drove cameraphone technology with its Cyber-shot range. Such innovation propelled the brand into pole position in the UK in 2006, with market share of more than 25%, according to Perron.

The creation of Sony Mobile has resulted in job losses, although Sony will not reveal the exact number, as it seeks to strip out layers in an organisational restructure.

'I can summarise [the restructure] in one word: speed,' says Perron. 'We want to accelerate the way we bring our offer to the market by accelerating the decision-making and development processes.'

His boss, executive vice-president of sales and marketing Kristian Tear, has removed a layer by scrapping regional units and instead focused on nine 'customer' units, which report to the group marketing function in Japan.

Perron was named president of the North Western Europe customer unit, comprising the UK, Ireland and the Netherlands, earlier this month. This followed his promotion last September from a head of region to general manager and head of Sony Ericsson UK & Ireland. Added to his management remit is ensuring that Sony Mobile finds a way to stand out from the crowd, with entrants from the Far East such as HTC, Huawei and ZTE making it an increasingly noisy market.

'The single objective is to make sure we know the consumer trends faster, decide our product pricing strategy quicker, give strong and consistent feedback to our development teams and bring product (to market) faster,' explains Perron.

'The market is fierce – our competitors are focusing,' he adds, referring to brands such as Nokia and HTC, which have honed their strategies after a period in which the market became further fragmented.

Sony Mobile's product focus will be on the high-end Xperia S, mid-tier Xperia P and mass-market Xperia U. The latter is intended to bring smartphones into an affordable price segment for a British public still battling harsh economic conditions.

Marketing activity will aim to break down the complicated 'connected entertainment experience' concept into a more palatable 'play, watch, listen and create' proposition, which will be delivered via the Sony Entertainment Network.

'Play' will centre on gaming experiences, from the entry-level Angry Birds app to the Sony PlayStation-certified Xperia S compatibility, while 'watch' will focus on how Sony smartphones can be linked to TV.

Perron explains 'listen' with the simple rhetorical question: 'Who else other than Sony can really be credible in terms of music?' Along with music from artists signed to Sony, consumers will have access to Sony's Music Unlimited platform, an unlimited streaming service boasting 15m tracks.

Tying it all together is 'create', which Perron hopes will piggyback on the trend for user-generated content. It aims to encourage users to create content, then share and store it on Sony's PlayMemories cloud-storage service.

Expect to see a more holistic approach to Sony Mobile marketing, too, which will be predicated on all the Sony Group assets.

'Our marketing and brand strategies will clearly continue to make visible this connected entertainment experience to the consumer – this is not smartphone-focused,' says Perron.

The 'Play, watch, listen and create' framework on which Sony is building its mobile proposition fits neatly into the Sony Group's wider 'Make.Believe' positioning.

'Sony is the brand. The vision is curiosity. The visible promise is "Make.Believe",' adds Perron, his French accent somehow elevating the levity of the soundbite's philosophical tilt. 'Our brand strategy within Sony Mobile will be about curiosity, about making sure we inject this DNA into everything we do, from strategy to communications.'

Behind the high-blown concepts lie some impressive technological innovations, including the brand's moves into near-field communication (NFC). 'A lot of people talk about micro payments and financial services, which is obviously one of the strong uses, but we believe NFC has a much broader objective,' says Perron. 'It's about bringing an enhanced user entertainment experience.'

After a torrid end to 2011 for Sony Ericsson – 'I don't think any other company was bitten by so many natural disasters last year' – the reborn Sony Mobile is banking on its unique NFC proposition to help achieve standout.

The 'go-to guy' for launches

Things have come a long way for Perron since overseeing the launch of the first Sony-branded phone in 1993, while he was a marketer in the French business.

During his time at Sony, he says he has become the 'go-to-guy' when it comes to handling the launches of 'strange' new products, perhaps making him the obvious choice to lead Sony Mobile in this state of flux.

'I grew up in the mobile industry, but I now see mobile activity getting closer and closer to the home environment. Using a smartphone will no longer be about making a phone call, sending an SMS or tweeting on the move; it will become more and more an integrated part of the living room,' predicts Perron.

Whatever shape the company takes in future, he believes that marketing will be the driving force. A successful campaign will ensure that consumers understand the trickery of using a watch to control a cameraphone - and therefore create a distinct proposition for the business.

'This consumer engagement is critical to the long-term profitability of the company,' adds Perron. 'Marketing is of paramount importance to Sony Mobile's future.' 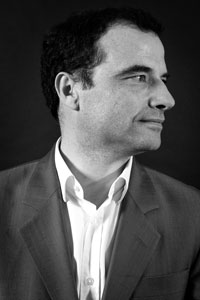 Given additional responsibilities for Belgium and Luxembourg markets, Sony Ericsson (2009-2011)

Family Lives with his wife in Fulham, West London. They have two children.

Hobbies 'I enjoy marathon running. It's amazing what the brain can do when the body says "stop". I am also passionate about wine.'

On how London compares to Bogotá (where he lived before moving to the UK last September) 'The weather is similar, but London is a much more mature capital - it's easier to settle in. I enjoyed Bogotá because Colombian people are open-minded and really nice. It has become quite a safe country, even though we think of drug cartels and kidnappings.' 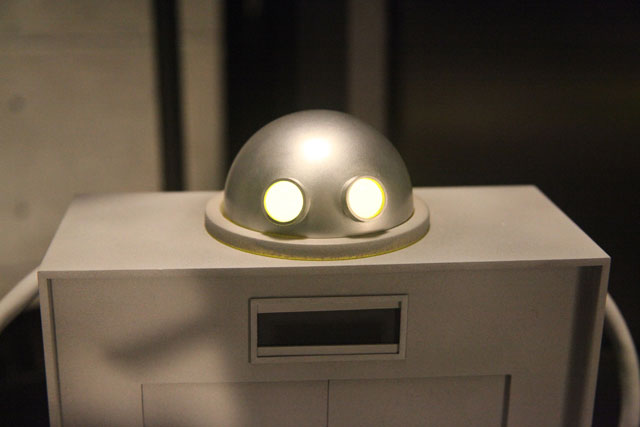 Sony Mobile enlisted Wes Anderson, director of Fantastic Mr Fox and The Royal Tenenbaums, for the global campaign that aims to establish Sony as a mobile brand.

The script for the global TV campaign, which focuses on how the Xperia handset range shares content across devices, is based verbatim on the imaginings of an eight-year-old boy.

In the UK, TV activity is being supported by digital, print and outdoor activity, which aims to communicate a 'Made of imagination' positioning to 44m people over the age of 15.

Social-media activity will be hosted on a 'Made of imagination' online hub and the brand's Facebook page. It will begin with clips of football trick-shots filmed on Xperia smartphones.