Land Rover, Pets at Home, Toolstation and Rays of Sunshine are among winners

Spark44 and MediaCom have taken the top prizes for Land Rover and the charity Rays of Sunshine in the annual digital creative competition run by Ocean Outdoor, in partnership with Campaign.

The contest rewards and celebrates bold out of home concepts and helps bring winning entries to life. Winners, which were chosen by a panel of 19 judges from the outdoor and ad industry, were announced at a breakfast ceremony at London’s National Gallery which was also live streamed.

Spark44 won first prize in the commercial brand category with “#Outspiration” for Land Rover, which embraces the force of nature, encouraging people to look after their health and wellbeing by taking regular breaks outdoors. This highly immersive campaign uses the audio capability and connectivity of Ocean digital out of home screens to literally live stream nearby streams, creating beautiful, inspiring windows into nature right on our doorsteps.

MediaCom’s work for Rays of Sunshine scooped first prize in the charity category. Its “Making Children’s Wishes Real” uses movement and other tech to turn imaginative drawings by seriously ill children into reality, just as the charity makes their dreams come true.

In announcing the winners, Ocean UK joint managing director Phil Hall noted that the predictions for huge growth in digital outdoor made at the start of 2020 had, in fact, been superseded and that the entries to this year’s competition were emblematic of the creativity that is helping to drive the medium forward at such pace. “It is now really taking the medium to the next level,” he said.

Not only that, the top-winning ads epitomised, respectively, how outdoor can be a “real force for good across the community” and the “important link” between the real and virtual worlds.

“Digital out of home is a broadcast medium which reaches people on different levels and in ways they least expect,” he said. “Brands that create emotional connections are outperforming their competition and reaping the commercial rewards. DOOH is the platform to deliver all of that, priming other media channels and creating meaningful and often highly shareable content in the process.

“This year’s winners leverage every technical capability of DOOH to provide support, deliver important messages and spread some positivity. We commend all of our winners and look forward to taking their concepts forward, working collectively to help the people and the communities where we operate.”

The return of the annual digital creative competition following a one year hiatus was marked with “yet more exceptional work,” he said, with much of it, inevitably, taking inspiration from the challenges of the past 18 months. All three winning concepts in the commercial brand category take mental health and wellbeing as their principal theme.

The six winning entries - three in the commercial brand category and three in charity - share a prize pot of £500,000 worth of airtime for their campaigns to be showcased across Ocean’s multiple environments and iconic digital formats in cities across the UK.

Second in the commercial brand category is The&Partnership for Pets At Home with “Lifting London during Mental Health Week”. The third prize went to Krow for Toolstation with “The World’s Most Supportive Poster”.

In the charity category, Engine took second place for Missing People with “Making the Missing Unmissable” and Forever Beta was awarded third for The Big Issue and “The BIG Welcome Back”. 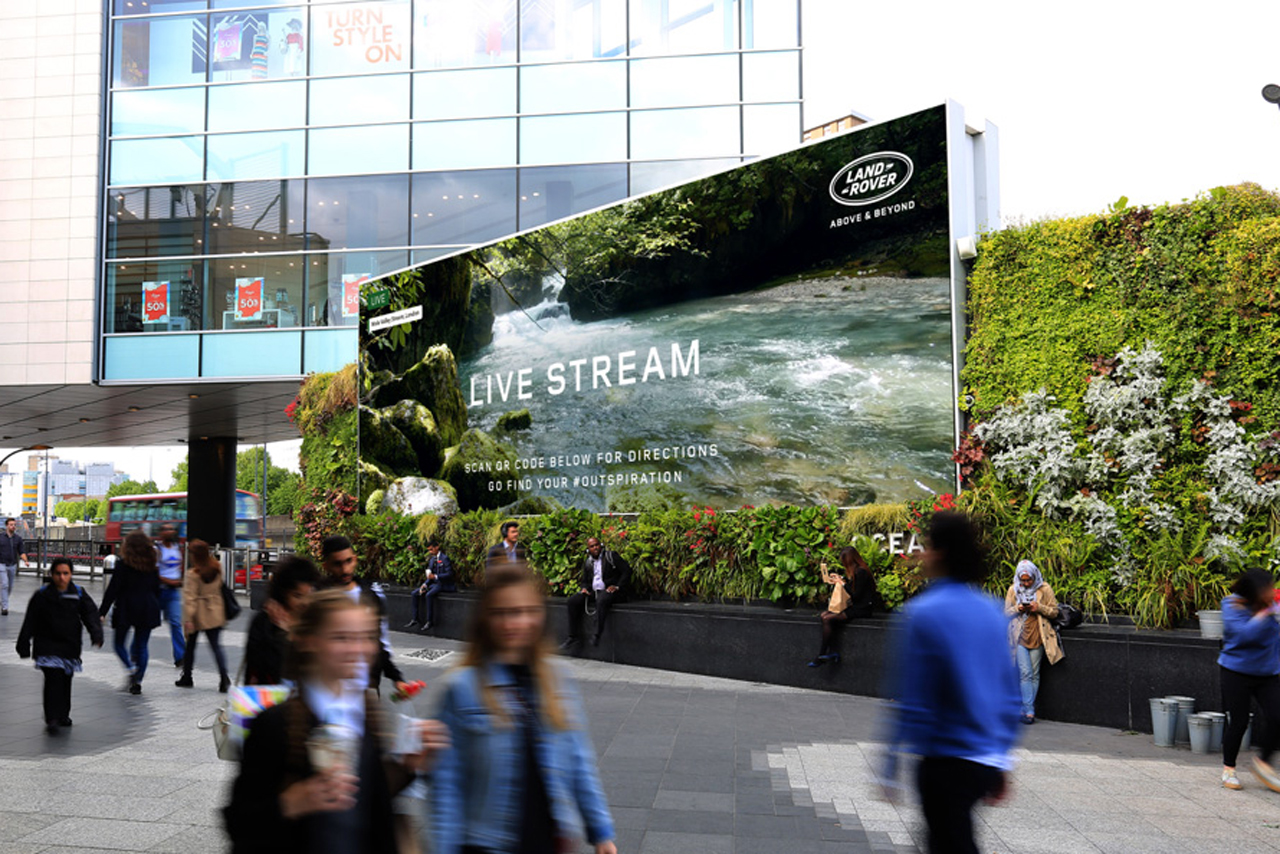 Research suggests that 40% of the working population fails to get the recommended two hours minimum a week in nature to support their wellbeing. To mark Mental Health Awareness Week, Spark44 and Land Rover present immersive “live streams” on Ocean screens to raise awareness of the importance of nature to improve mental and physical wellbeing. Beautiful in its simplicity, the live streams create windows into nature that’s right around the corner. Screens will be located in high-footfall, high-stress, urban locations, providing passers-by with a breath of fresh air to help them escape the city for a short moment.

To make the experience truly immersive, audio will play the calming natural sounds of a running stream, while a QR code takes the public to a map showing where they can find the stream and their moment of #Outspiration.

The judges said: “We like the insight and the tie into mental health. This campaign pushes local engagement but in a way that isn’t overtly selling. It’s simple, but nice. The next step for Land Rover.” 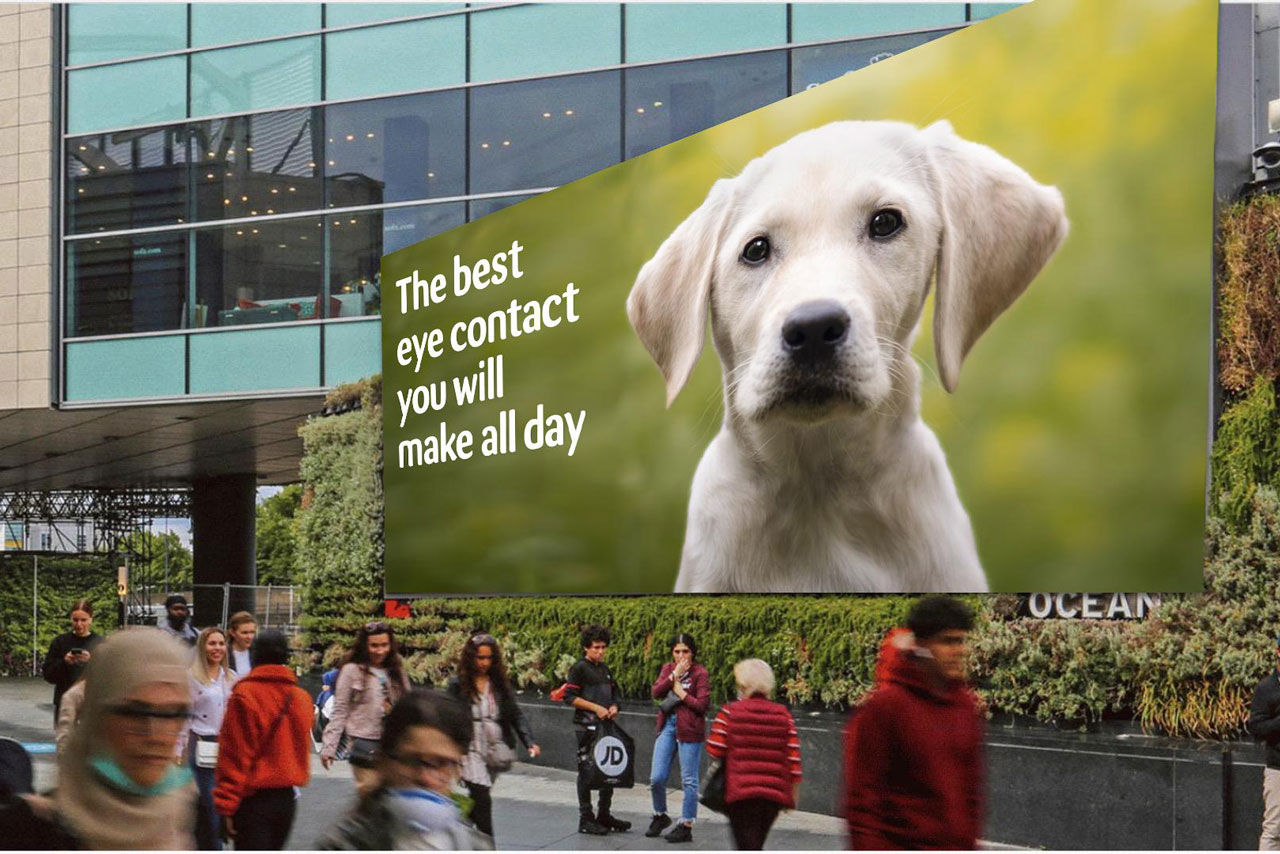 This campaign uses the nation’s affinity with pets to lift the spirits of Londoners, harnessing multiple different technologies and wi-fi connectivity to show how much pets enrich our lives. The idea encompasses a range of executions, from a peaceful live stream of a fish tank on the Piccadilly Lights to create a moment of calm, or a puppy which responds to passers-by using audience detection technology, to the therapeutic benefits of stroking a cat using mid-air haptics tech and the calming sound of birdsong.

The judges said: “We like how the technology ties in so well with the message of the campaign. It’s well connected and very engaging.” 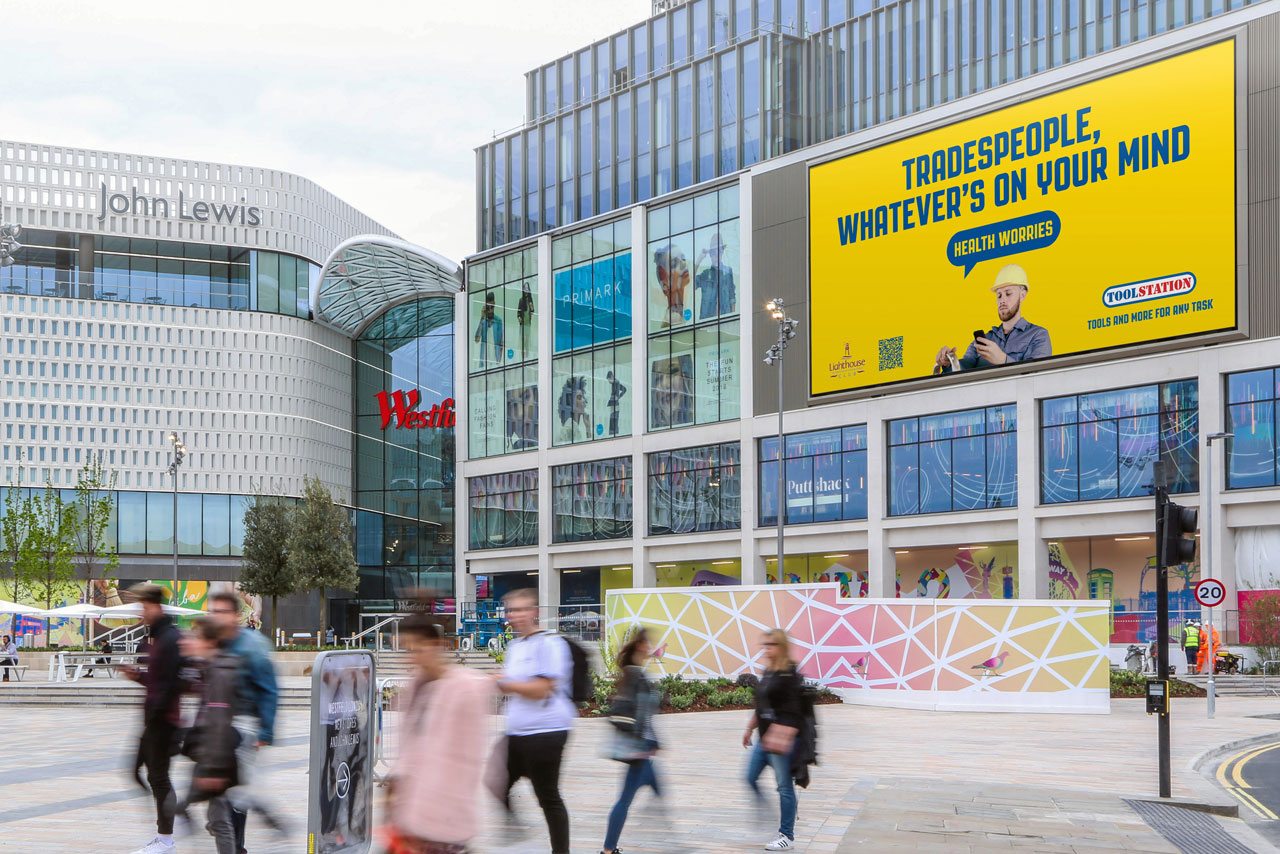 Every day two tradespeople working in the construction industry take their own lives, a suicide rate three times higher than the national average. To raise awareness about a hidden problem, Toolstation creates a live chat poster offering tradespeople immediate support to help overcome their worries and personal problems.

As part of Toolstation’s partnership with the Lighthouse Club charity, tradespeople can connect to Ocean screens via a QR code to chat privately with a trained expert. An anonymised live feed will use different animations to reflect the most talked about topics, the scale and level of visibility tackling the stigma around mental health problems experienced by construction workers. The campaign will also serve as a live listening tool to help experts identify further areas of stress.

The judges said: “This is a great initiative with clear messaging and an immediate call to action. Out of home is the perfect medium as this campaign which will reach tradespeople directly and immediately in the environments where they work.” 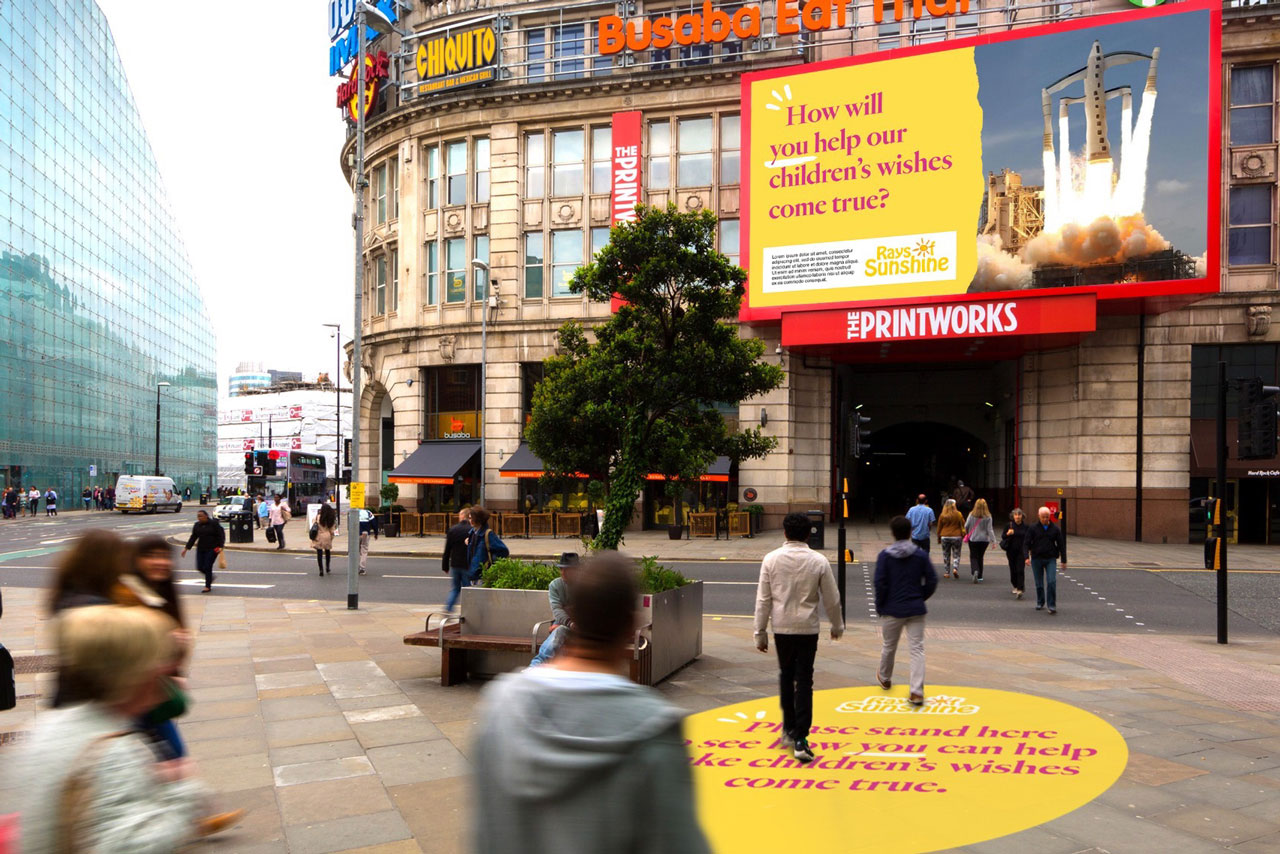 This concept brings to life the hopes, dreams and wishes of seriously ill children using Ocean’s large format full motion screens to amplify the Instagram account Things I Have Drawn which is also  managed by MediaCom.

A collection of drawings are accompanied by the simple question: “how will you help our children’s dreams come true?” People are invited to use Ocean’s Look Out technology, subtle motion, audio and mid-air haptics to turn imaginative illustrations into real life renders, with each execution revealing the dream of the young artist featured. A QR code takes people to the charity’s website where a donation can be made.

The judges said: “This campaign is highly creative, fun and has great talkability. It is the Art of Outdoor at its best, perfectly demonstrating the interplay between digital outdoor and social media. All for such an important cause.”

When high risk and vulnerable people go missing, the first 48 hours are critical in the hunt to find them. To speed up the search and improve recognition, Engine uses NVIDIA’s Kaolin library, an innovative deep learning  technology, to transform standard, flat 2D images into powerful, memorable full motion 3D posters.

The sense of urgency is reinforced by a timer which shows how long an individual has been missing and the search is extended beyond Ocean’s national Grid network of 40 screens in 10 cities via QR codes. These open into dedicated Missing People social media pages which the public can easily share on their social channels. The end result is a Missing poster designed for the 21st century that could well help save the life of a vulnerable child or adult.

The judges said: “The multi-layered strategy to help raise the profile of this charity and its work really made this entry stand out.” 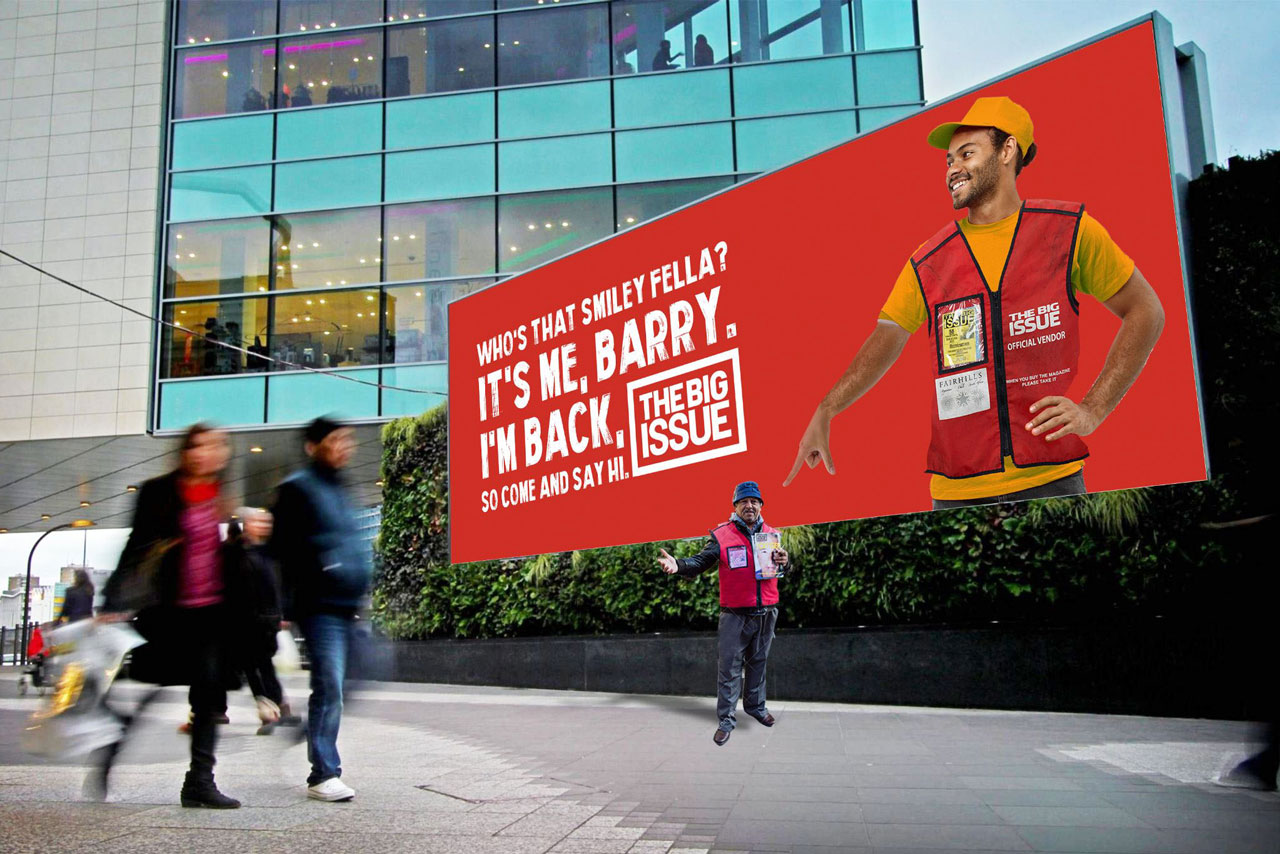 The past 18 months have been the most challenging in The Big Issue’s history. As circulation of its magazines plummeted, vendors lost out on millions in sales and their livelihoods were wiped out.

As life returns to normal, Forever Beta and The Big Issue create an opportunity to welcome their vendors back, reclaiming their places on high streets in the biggest possible way. This campaign combines geo-location with personalisation, reconnecting vendors with their communities using Ocean’s large format screens. Every execution is triggered by a “beacon badge” on individual vendor jackets which signals when they are close to a billboard, activating their personalised message.

The judges said: “Big Issue vendors are an integral part of our community. This idea is all about helping them to regain their independence. It’s simple, yet brilliant.”

What Ocean's Digital Creative Contest can do for you