Spotify’s annual "Wrapped" campaign has returned for its third year, expanding beyond music to showcase podcast listening behaviour for the first time.

The end-of-year campaign, created in-house, draws on the music-streaming platform's data to tell quirky stories from users' listening habits. It launches today (28 November) and will run across outdoor, digital and social media in markets including Australia, Brazil, Canada, Colombia, Denmark, France, Germany, Indonesia, Mexico, the Philippines, the UK and the US.

The 2018 ads focus on the creation of Spotify playlists and will feature more than 50 artists, such as Ariana Grande, Post Malone and Shakira. 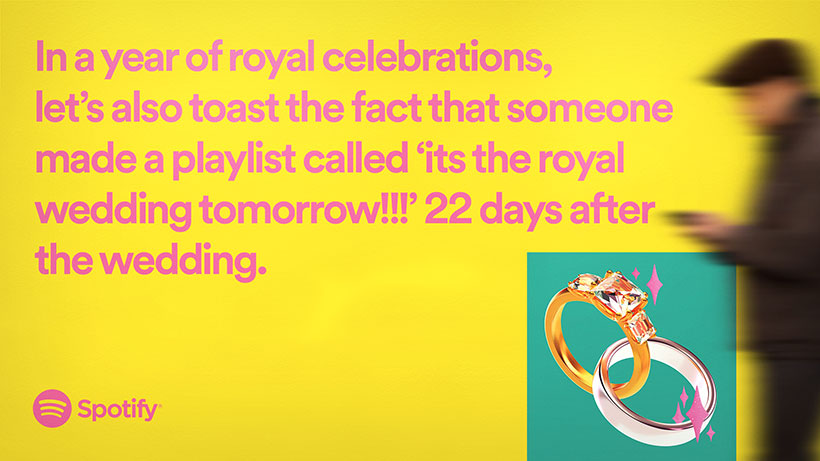 Examples include a user who made a playlist called "It’s the royal wedding tomorrow!!!" 22 days after the event and the large number of playlists devoted to the popular children’s song Baby Shark.

June Sauvaget, Spotify’s global head of consumer marketing, said: "Our annual ‘Wrapped’ ad campaign is a true embodiment of our proposition as a ‘platform for discovery’. Our users have come to expect the year-end campaign and are eager to see how their interactions on Spotify connect to what is happening across the global Spotify community.

"At the same time, it serves as a large-scale thank you to our listeners for their collective impact in shaping the platform throughout the year while further solidifying our place in the global cultural lexicon." 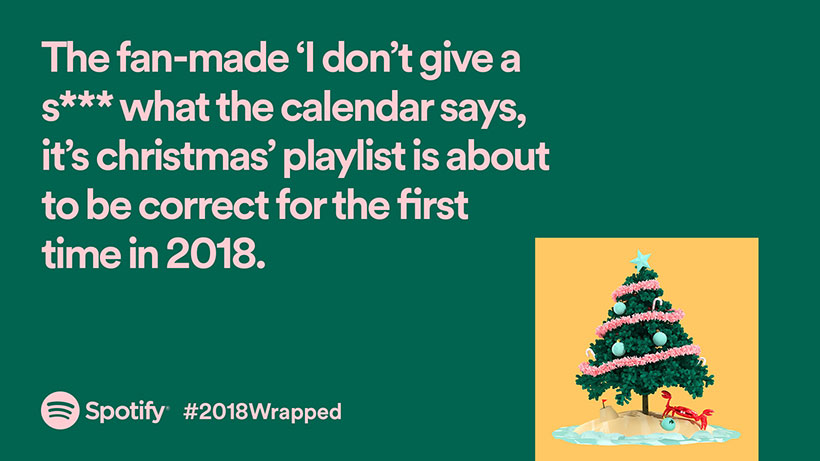 Alex Bodman, global executive creative director at Spotify, added: "Part of our creative process is to think about the cultural moments, tensions and oddities that defined 2018 and then see how music and podcasts helped people respond.

"That’s why this year we decided to focus on playlist creation; it’s one of our features that allows people to get highly creative. The fact that users give the playlists such hilarious names or use them to comment on broader cultural trends only makes the material richer."

Spotify's end-of-year campaign started in 2016 with "Thanks 2016, it's been weird", highlighting consumer data such as the 3,749 people who streamed It’s the End of the World As We Know It on the day of the Brexit vote.

Last year, the ads centred on the idea of "goals", including: "Be as loving as the person who put 48 Ed Sheeran songs on their ‘I Love Gingers’ playlist."

Spotify is betting big on podcasts

Spotify "Dinner" and "Door" by Spotify