The £125m Glasgow-based live event venue, which covers 64 acres and is managed by the Scottish Exhibition and Conference Centre (SECC), was revealed last Thursday (26 September) to international media.

John Sharkey, group chief executive of SECC, said: "Building our new arena has been a very complex project, and hugely challenging. However, we are delighted to be entering the final stage of this journey. Our calendar for 2013 through to 2014 is filling up fast and will provide fans with the eclectic mix of world class events that The SSE Hydro was built to accommodate.

"The project team, funding partners, Glasgow City Council and Scottish Enterprise and sponsor partners including SSE can be proud to have played a part in delivering a unique and iconic entertainment space for Scotland which will be the envy of Europe if not the world".

The venue has been designed by London-based architects Foster + Partners and has the ability to host up to 13,000 guests, as well as the potential to inject around £131m each year into the local economy.

The SSE Hydro has also been selected as one of the venues for next year’s Glasgow 2014 Commonwealth Games for both gymnastics and the netball finals. It is expected the arena will host more than 140 events each year.

Sir Ian Grant, chairman of SEC Ltd, said: "This is a magnificent addition to the SECC campus. The importance of The SSE Hydro and its global significance shouldn’t be underestimated with an expected audience of over one million visitors annually. 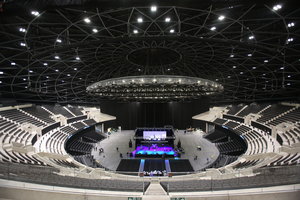 "In addition to expanding our capacity and being able to attract the world’s biggest stars and global sporting events we have also created more availability in the existing SECC halls which in turn will generate more exhibition and conference bookings and economic impact for the local economy".

Wendy Barbour, SSE director of Commonwealth Games and sponsorship, added: "The opening of The SSE Hydro is a historic moment for Glasgow and for Scotland and it also marks the beginning of an exciting new chapter for SSE as we enter our first year as title sponsor of this wonderful new venue.

"We are very much looking forward to offering our customers access to a range of exclusive benefits associated with the venue including a 48-hour pre-sale through our brand new customer reward scheme SSE Reward and we are proud to support live entertainment in Scotland through our investment in The SSE Hydro."

For more on tonight’s Rod Stewart gig and the latest from The SSE Hydro in Glasgow, visit the Event magazine website tomorrow.

SSE Hydro chosen for Sports Personality of the Year 2014

SECC's Sharkey reveals global move could be next step

The Hydro to host MOBO Awards

Roof blaze will not delay The Hydro opening, say bosses

Uncertainty over The Hydro opening after blaze

Rod Stewart to open The Hydro