It is Wonderhood's debut campaign for challenger bank.

Starling Bank has launched a multimillion-pound campaign championing the heroism of business owners in the first work for the brand by Wonderhood Studios.

"Helping business fly" launched on TV on Sunday [23 February] during half-time in the England vs Ireland Six Nations rugby match. It tells the story of a small business owner who sets off into the unknown on an epic adventure. After waving goodbye to her family, she takes off in her shed – which doubles as her home office – and soars through the clouds, where she is joined by other small businesses that have made it.

The work will run across outdoor, radio and TV shows including Channel 4’s Homeland, ITV’s Flesh and Blood and Sky One’s Intelligence.

It was created by Ads DeChaud and Phil Le Brun, and directed by Elliott Dear through Blinkink. Bountiful Cow handled media planning and buying.

The campaign aims to grow the challenger bank’s small and medium-sized enterprise customer base. In 2018, Starling became the first mobile bank to launch business accounts with no monthly fees and an in-app marketplace of flexible products for business owners.

Anne Boden, chief executive of Starling Bank, said: "We wanted to do something different and authentic that hadn’t been done before. When business owners see the campaign, we want them to feel inspired and courageous; to see that they can do it as well."

Starling appointed Wonderhood as its creative agency in September 2019 after a competitive pitch. Bountiful Cow won the bank’s media account in November.

Aidan McClure, chief creative officer at Wonderhood, added: "For anyone who’s started their own business, they’ll recognise that feeling of plummeting towards certain ruin before turning on a dime and soaring through the clouds. This campaign has been lovingly crafted for those heroes." 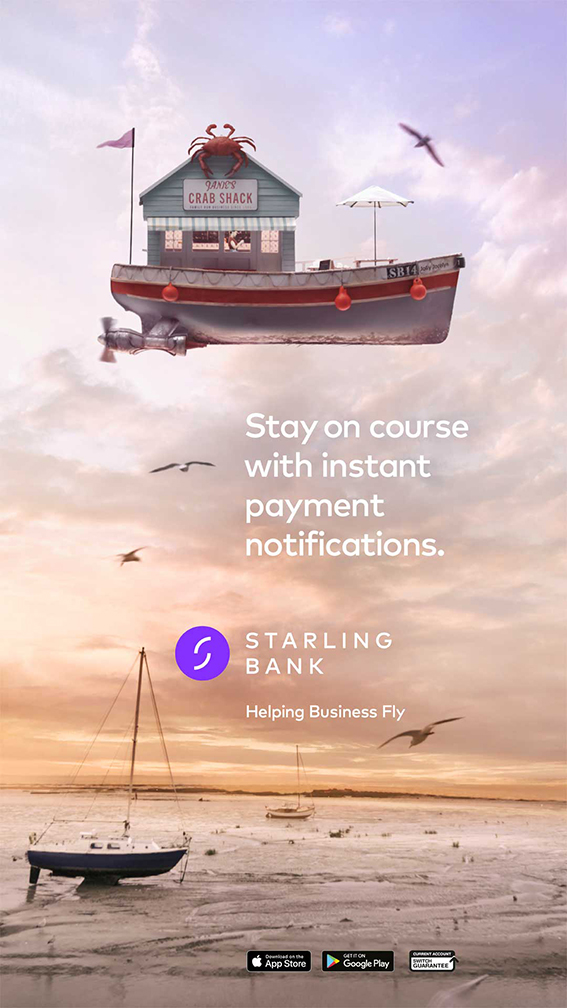 The ad combines live action, miniatures and practical effects to give it a hand-crafted feel. The soundtrack was recorded with a full orchestra, inspired by scores from family films, to set a tone of optimism and bravery.

Dear explained: "I've always been fascinated with how they achieved the special effects in Hollywood films before CG was an option, and most of my favourite movies use models and practical effects.

"When it comes to the filming, I feel that there's a certain quality to the finish of a miniature, coupled with the real light and lenses, that can often make it feel more realistic, and any movement tends to feel more organic and nuanced. For me, it's a far more enjoyable process than solely using CG and has a charm that's difficult to simulate."