Brand marketers should use their power to force change in agencies, a debate heard to launch the IPA's Women of Tomorrow awards.

"Unless you’re bringing your mother into work every day, shouting about your achievements is your responsibility."

This was the rallying cry from Erminia Blackden, head of strategy at PAA, at a debate to launch the IPA’s Women of Tomorrow awards, in partnership with Campaign, DNA and Engine.

Never before have the Women of Tomorrow awards brought "such weight of responsibility," said Campaign’s global editor-in-chief Claire Beale. The outpouring [to Campaign] of women sharing experiences of abuse of power against them have been "overwhelming and depressing" and have left Beale "genuinely cold, shocked and emotional."

"I’ve felt an associated guilt and a big responsibility to push for change," she said. "We shouldn’t be encouraging new women to come into the industry without ensuring we’ve made it a proper and fair environment."

The panel discussion, attended by around 100 people at Engine’s offices, included brand marketers who took differing stances on clients’ responsibility to force a change within agencies.

"We pay the bills and money talks," said Kate Dale, head of brand and strategy at Sport England. "We should be asking,’who’s missing from the conversation?’ – whether that’s about gender, age, class, ethnicity or whatever. If we don’t, who will?"

Kerry Chilvers, brand director at Direct Line Group, said she wanted "diversity of thought" from her agencies. "But I’m torn. It isn’t my responsibility to change agency land. We shouldn’t be a barrier to it and we can help the conversations, but I don’t run your businesses," she said.

Blackden predicted that, in 15 years’ time, the diversity mix will be a box on clients’ RFPs. But, for now, "it’s all new and if you put too much pressure on agencies, you could end up with a disingenuous result," she warned.

"By the time women get to work, they have had at least 18 years of social and cultural bashing that we’re trying to unpick. It’s difficult to move quickly. We need to measure everything, share everything and work together – both agencies and clients – and then we’ll see progress," she said. Julian Douglas, the vice chairman of VCCP, pointed out that many clients’ businesses are more diverse than most agencies. 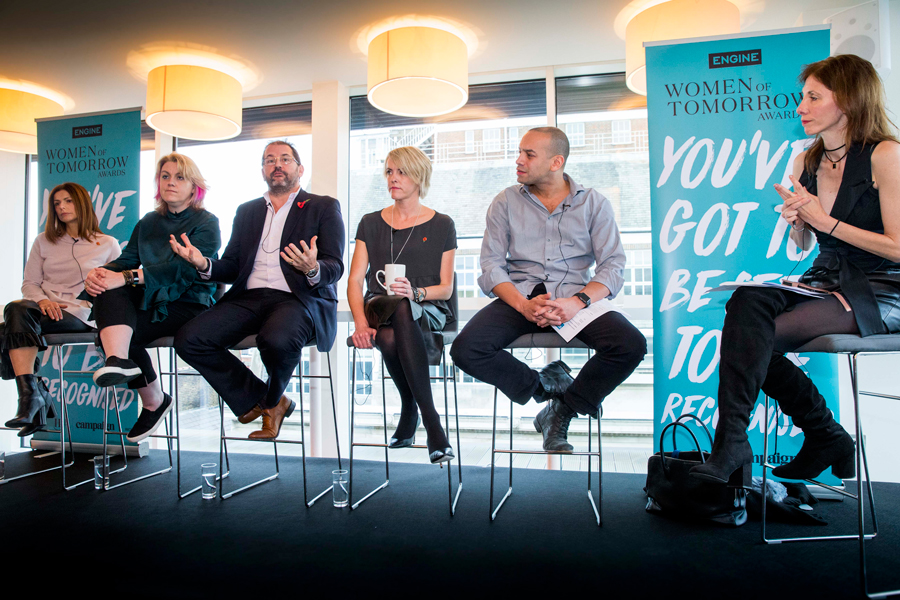 Dale said that the way an agency responded would not be a "pass or fail", but Beale suggested that brand marketers should use their power to force change in agencies.

When it comes to her own business, Chilvers encourages flexible working for everyone, not just women. "I tell my team, ‘I don’t care about the hours you’re keeping unless they are too many,’" she said. "‘You know the job you need to do.’" In DLG, the target for more women in leadership roles by 2020 is linked to executive pay. Chilvers’ advice for all organisations is to encourage of culture of gender equality, particularly in terms of who takes time off to provide care within a family.

Remote working was another suggestion that would improve the lives of both men and women in organisations, the panel agreed. "We already do this on global business," noted Douglas.

Simon Peck, Engine’s group managing director who shares child-rearing responsibilities equally with his wife, said agencies need to show more trust in their employees to use their time responsibly. "It’s a big emotional shift in the way we think about people."

The way brands and agencies represent women in their advertising also came under scrutiny during the debate. In her study, 21st Century Woman, Blackden found that 91% of women asked said brands should take more responsibility for the way women are portrayed; 50% said they could see things were improving and 85% said more needs to be done.

Chilvers admitted that not enough thought on this issue goes into briefings. "We hold a mirror up to what’s normal but there’s more that we can do," she said.

Dale, who was part of the team behind the award-winning "This girl can" campaign, said: "We’re in an industry which can make change happen. There’s an exciting opportunity to do something really powerful."

Final words of advice from the panel

For women aiming for senior leadership

Peck, quoting Gandhi: "Be the change you want to be. Lower the ladder for those coming behind you and be a role model."

Douglas, quoting Ed Sheeran: "Thinking out loud. You tend to keep your thoughts in while lads seem to say what they think more. Your opinion matters."

Dale: "Don’t be polite and wait to be asked."

Chilvers: "Don’t be driven down by what you’re not good at. Find your strengths and your super-strengths."

Douglas: "Wake up. This stuff matters."

Blackden: "Share our failures and we’ll achieve something more significant together."

Peck: "Make it everyone’s problem and responsibility. It’s not an HR issue or a women’s issue."

The Women of Tomorrow awards champion female talent across agencies, media owners and clients. The 2018 awards will be co-chaired by IPA president Sarah Golding and Beale, with a shortlist of entries announced in February before an awards ceremony on International Women’s Day, 8 March. Engine has created a series of print ads and will also be producing a series of podcasts to promote the awards.

Meet the adlanders who made life-changing decisions in 2017

How adland can close the gender pay gap

Uber's chief brand officer: if we can change, no one else has any excuse

Why I'll be out of office on Equal Pay Day