The makers of 'Get your shot' reveal it started with the music.

"Two shots yes please now chase the heat," the opening line of this ad could be mistaken as a suggestion to enjoy your favourite tipple with a chaser, in fact, it's referring to getting two doses of the Covid vaccine.

Filmed in a Wapping warehouse, "Get your shot" by RayGun London merges dance, spoken word and house music in an attempt to capture young people's attention.

The spot is set to Opal by Bicep, which played a fundamental role in the development of the production that went from brief to edit in just three weeks. For Robbie Kilgour, founder of RayGun and director on this project, when it came to telling the story of getting back a sense of normality it had to be tied to music.

He said: "I was looking at how we could tell the story musically. I felt like we had to tie it to clubbing, festivals and youth culture in a way that our audience would relate to. As we were writing the script we knew that the music was going to be important for our audience. It started off with music at the centre of it."

After the track was secured, poet James Massiah was able to create a lyrical narrative that takes the audience from getting jabbed by a nurse to reuniting with family and friends. Then the viewer is whisked off to a late-night rave scene filled with dancing and kissing before hitting the streets on the way to a sporting match. The film ends with a summer love-style dancing scene symbolising the freedom to come. A hyper-real environment was created within one static space, the production design was by Set Sisters.

Kilgour explained: "In each of those scenes you feel like you're in the environment that you're meant to be in, but we've got it contained in this beautiful big hydraulic station in Wapping. It adds another layer to the piece. Our audience really cares about aesthetics, how things look, how things feel. Through art direction, we were able to bring a club to life and festival all inside the same warehouse.

"We wanted to create a vibrant world that makes you feel like you're in the real world, but that's vague enough to allow you to put yourself in the spaces that you want to be in. Creating the right feeling for people to be motivated to get your shot."

RayGun London was launched by Kilgour in 2018, he runs the shop with director of photography, Joseph Harvey, who donned his rollerblades to capture the production from his own unique perspective. The pair are both at the upper end of the target audience so drew on their personal motivations to help inform the piece. 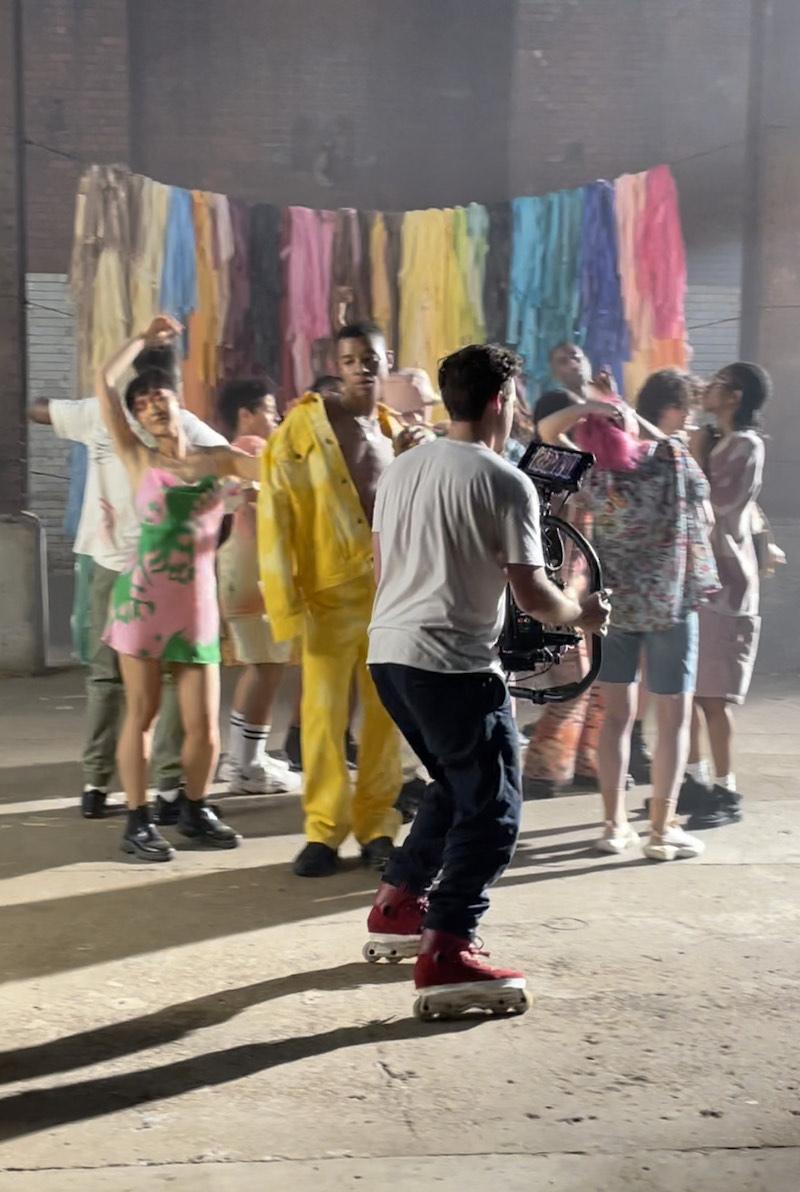 The ad, running on VOD, was commissioned by Covid Comms and is on Nowords UK, the government-owned youth social media channels that deliver content direct to young people aged 16- 29 years.

"Get your shot" is part of the latest Covid vaccine push that saw figures from the nightlife industry urge young people to get a vaccine. This also included Heaven nightclub becoming a pop-up vaccination site and the "Don't miss out" ads by Mullenlowe that were inspired by club posters. Current government communication states that from September, people will be required to have had two doses of a Covid vaccine to enter nightclubs and other large-scale events, proof of a negative test will no longer suffice.

Kilgour was sensitive to the fact that some young people may still be making up their minds about being vaccinated.

He said: "We were always very appreciative when we went into this there were going to be different people with different opinions. That helped inform our decision to make [the ad] about what is important to the audience. Everyones going to make their minds up about these things, but we wanted to focus on creating something that was a bit more hopeful."

This resulted in a lighter approach, that doesn't shock or scare but rather tugs at people's longing for normality, for dance floors, for festivals and for sharing in the music.