After half-a-century, the necromancers have finally defeated rationalism.

What’s the most dangerous job in the world?

Once upon a time, it used to be account service guy in a creative hotshop. Anyone who has worked in one will know what I mean.

In such places, being in account service was not a job for the faint-hearted.

The poor man or woman went home every night in tears. Imagine it: he or she turns up in the creative team’s office with some seemingly benign request from the client regarding the ad, some minor change, and the creatives point-blank refuse to allow it.

"Why?" the account service guy would ask. And there was no answer, because they didn’t know. Or couldn’t articulate it. All they knew was that it would ruin the ad.

What was going on?

It was the battle of the layout pad. A war that has lasted 56 years and which, I am pleased to say, is finally over. At least, I think it is.

The reason for my optimism is the publication of a book by James Hurman called The Case for Creativity. It weighs in on the side of the creatives but uses something normally alien to their world. Statistics.

To understand what I mean, we need to do a bit of industrial archaeology and travel back to 1959, the year the war broke out. The world was very different then. There were no woolly mammoths wandering the plains but there were typographers using metal type and our grandfathers made ads on a thing called paper.

The world was about to change, though, when Doyle Dane Bernbach produced its epoch-making "Lemon" ad for Volkswagen. It introduced a new way of advertising. Up until that time, there had been unanimity that the way to advertise a product was to say it was good. "Guinness is good for you". 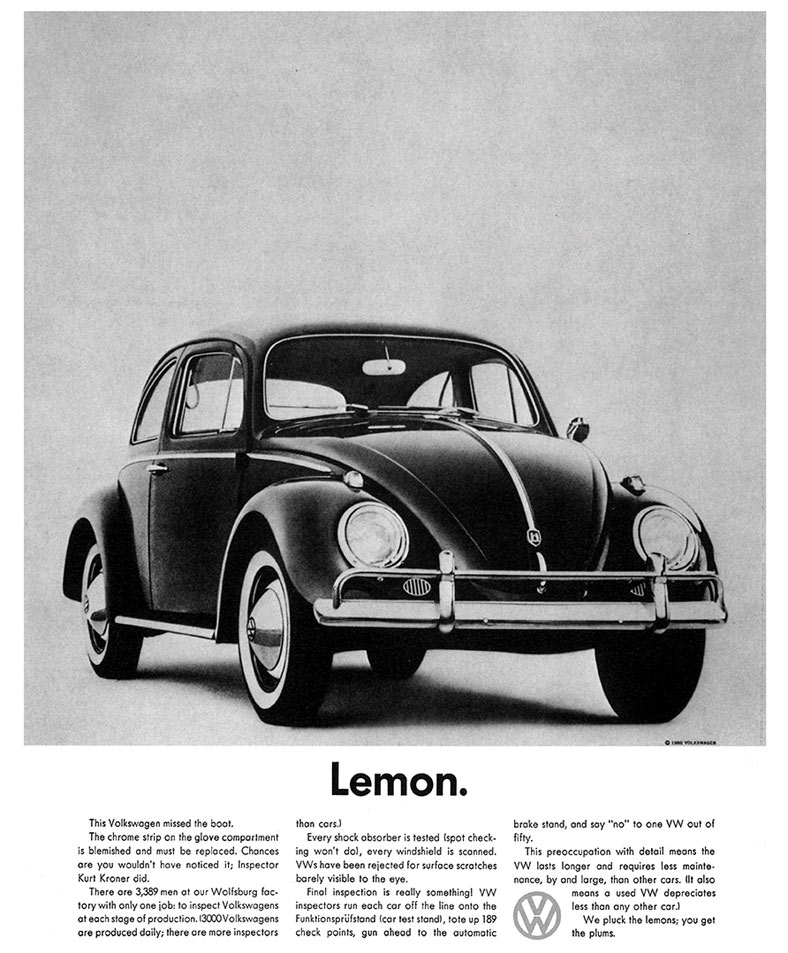 But here was a manufacturer spending thousands of dollars telling the world the product was no good – a lemon. Not surprisingly, not everyone was convinced about this new approach. The world of advertising became divided, roughly along the lines of right brain and left.

On the one hand, the rationalists – those who believed that persuasion was about presenting the facts, appealing to logic and reason, and expounding arguments.

On the other hand was a new unit called the creative team, who worked on instinct, gut feel and art. Rosser Reeves, the no-nonsense adman who invented the concept of the USP, called them "necromancers" – shamans who mixed potions containing "eye of newt and toe of frog". Eye of newt is pretty tame stuff compared with today, so heaven knows what he would have made of digital, digital OOH, AR, VR, AI, the Internet of Things, smart devices, Snapchat, wearables and half the population of the world chasing Pokémon Go characters…

The necromancers were really storytellers, although I do not think they thought of themselves in that way. They started with the premise that people are bored of ads and actively hostile to them. So how do you sell to people who feel like that?

The answer is: obliquely and with guile. You can’t hammer on the citadel door, demand they open up. You can’t make a frontal assault, you have to inveigle your way in using a whole range of clever storytelling devices. Like the besieging Greeks outside the gates of Troy, you put your message inside a beautiful wooden horse. (Nowadays, the Greeks would have used an AI horse.)

Even today, the "Lemon" ad still stands as the perfect example of this. You tell the audience that your car is great and they don’t believe you. So instead you tell them the car is no good. And guess what? They don’t believe you. There has to be a catch. They read the copy and become ensnared in a story about the quality-control inspector Kurt Kroner who rejects the less-than-perfect cars. Without realising it, the reader absorbs a sales message about VW reliability.

The thing about a story is that it uses a different software system in the mind. When we listen to stories, we relax our guard, we are more trusting. Storytelling circumvents the guard dogs of logic. When our minds switch to storytelling mode, we suspend our disbelief, we believe in magic. It’s an ancient art but just as vital in the cutting-edge world of our shiny new digital toys. When the digital bus shelter shows us monsters coming out of the pavement, we know it isn’t true, but we still gasp in horror and amazement.

The problem has always been that it is hard to prove it works. It’s art, not science. Not everyone was convinced. The fact that the industry held separate awards shows for creativity and effectiveness only fuelled the suspicion of creatives. But it also proved to be our salvation because it led to the creation of separate databases for effectiveness and creativity.

Which brings us back to The Case for Creativity. The book draws on research first done by the IPA in 2010 that compared the databases and arrived at the definitive result that creatively awarded ads significantly outperformed non-creative ones. Not only that but the more creative the ad, the more effective it was in the marketplace, and the margin is getting bigger because of social media. People share stuff online that touches the heart or astonishes, that makes them go "Ah" or "OMG!".

The data is described as robust and in the public domain. There shouldn’t be a lot to argue about. But I guess there will still be some diehards who refuse to believe.

After all, it took Lieutenant Hiroo Onoda of the Imperial Japanese Army 29 years to come out of the jungle on the Philippine island of Lubang and accept that World War II was over.