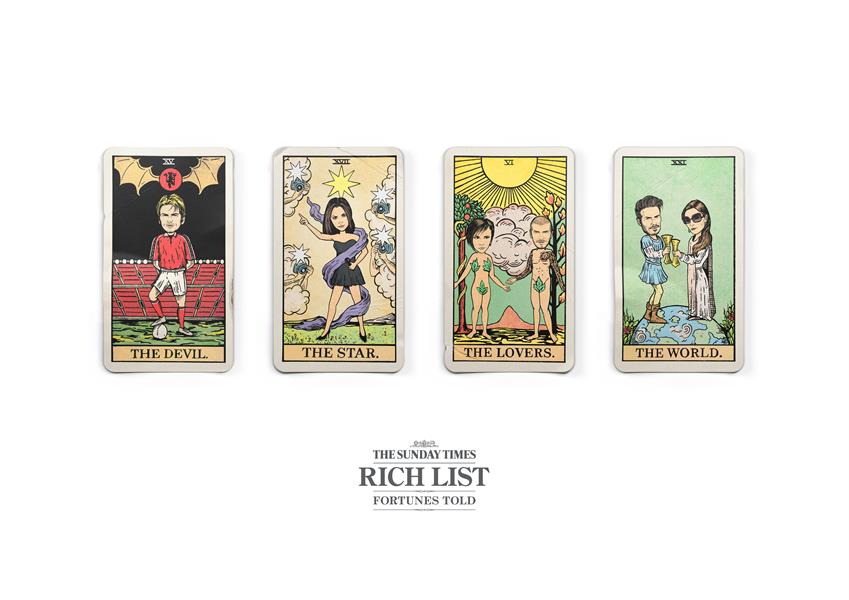 CHI & Partners has gone with tarot cards as the theme of its first Sunday Times Rich List campaign in four years.

Teaser ads appeared The Times on 14 April and the full campaign began running in print and on posters from 17 April, supported by online and social media activity. The campaign uses 19th-century tarot-card imagery to tell the stories of how some of the country’s richest people made their fortunes and how they will most likely be remembered. Grey London had created the Rich List campaigns since 2012 but News UK consolidated all of its business into The & Partnership in 2015. The work was created by Colin Smith and Angus Vine.

Northern "Go do your work thing" by Frame

Saga "Experience is everything" by VCCP London

Sky "The spell" by Sky Creative and AKQA

Heineken "Worth the wait" by Publicis

Abbot Ale "Relax with an Abbot" by Isobel

Apex Rides "Time to ride your way" by Atomic London

Montblanc "What moves you, makes you" by Wieden & Kennedy Amsterdam

The Times & The Sunday Times "Know your times" by Pulse Creative

The Times and The Sunday Times "Politics. Tamed" by Pulse Creative London

The Times Literary Supplement "Jane Austen at 200" by Bridge Studio