With Super Bowl 50 coming up on Sunday 7 February, Marketing looks at the brands that have already broken cover in the advertising battle.

Brands booked onto the Super Bowl catwalk have the chance to grab people’s attention well before the game with a well-judged teaser ad, or other marketing ploy.

First we look at the brands who have gone early, while here’s a list of brands which are definitely advertising but are keeping their powder dry so far.

Alan Rickman in ‘Alice Through the Looking Glass'

The voice of the late Alan Rickman stars in an ad for Disney’s forthcoming ‘Alice Through the Looking Glass’, with the trailer going live during the Super Bowl.

Rickman’s instantly recognisable tones kick off the two-minute trailer for the movie, Rickman’s last, in which he plays Absolem, AKA the Blue Caterpillar.

The English actress addresses Super Bowl audiences from the table of a restaurant, a Budweiser and burger before her. She says in icy tones that "if you drink drunk, you, simply put, are a short-sighted, utterly useless, oxygen-wasting, human form of pollution".

Rapper Drake takes the mickey out of singers - and himself - who use their music and image to endorse tech products in a 30-second Super Bowl spot.

In the ad he is interrupted constantly by suited execs during a performance for his ‘Hotline Bling’ music video.

In the midst of crooning the line, "You used to call me on my cellphone" filming is stopped and an exec says, "Perfect! Here are the changes."

"When you say ‘call me on my cellphone, just add ‘device eligible for upgrade after 24 months’."

Honda is trying to tick all the internet boxes - anthropomorphised animals, a dog, and a classic Queen track - for its Ridgeline spot. The ad sees the vehicle teach sheep to sing through its truck-bed audio system, and sees Honda returning to the Super Bowl after one year's hiatus.

Amazon has traditionally held back from Super Bowl advertising but it is going big with its first effort in a spot starring Hollywood heavyweight Alec Baldwin and American football legend Dan Marino.

A 30-second preview that launched on Wednesday 27 January shows Baldwin and Marino planning the ultimate Super Bowl party with the help of Alexa, the cloud-based voice personal assistant on its Amazon Echo device.

Alexa helps explain to Baldwin the concept of a "snack stadium" in the comedic spot, which highlights the capabilities of Alexa, which can also give fans predictions on what team is going to win.

Apartments.com is another debutant at this year’s Super Bowl and they have signed up actor Jeff Goldblum and hip hop artist Lil’ Wayne for their ad.

The property firm will reprise the Steve Jobs-esque Brad Bellflower character it first introduced introduced last March in a 60-second Super Bowl ad, and based on the trailer an appearance from Lil’ Wayne can also be expected.

The ‘change the world’ strapline featured in the teaser is the same as the one introduced in the first ad featuring Bellflower, which emphasises how easy it is for people to find an apartment on the site.

The idea, which plays on the upcoming US Presidential elections, will form part of a long campaign that will kick off properly with the broadcast Super Bowl ad, according to the beer brand.

The peanut butter and chocolate bar, owned by Nestlé, came out almost two months before the game with a spectacular way of announcing it would be placing an ad in CBS’ Super Bowl TV coverage.

When we make an announcement, we do it #BolderThanBold https://t.co/IQSpHZ8fvN

It used live video platform Periscope to show the announcement being delivered by a skydiver during a jump from 12,000 feet.

The campaign idea of ‘Bolder Than Bold’ has been brought to life before the game using the Paddy Power-esque approach of encouraging NFL players to break the rules on excessive points celebrations by promising to pay their fines.

And it has parlayed this into video content by teaming up with former NFL star Terrell Owens to challenge New Yorkers to show off their ‘Bolder Than Bold’ celebrations.

Doritos is a master at extending the life of its Super Bowl activity with its well-established user-generated ads competition ‘Crash the Super Bowl’. However, it is retiring the contest after this, its tenth year.

On 4 January the PepsiCo-owned brand revealed the three shortlisted ads that will face a public vote to decide which one gets shown during the game. Here's one:

The Korean carmaker, which announced in December it would make four ads with four famous directors, released this atmospheric short video called 'The Chase' on 25 January.

It followed this up the next day with 'Ryanville'.

Living up to its reputation for economy, the car brand has so far limited its teaser activity to this tweet featuring a still from its upcoming Super Bowl ad with actor Christopher Walken. 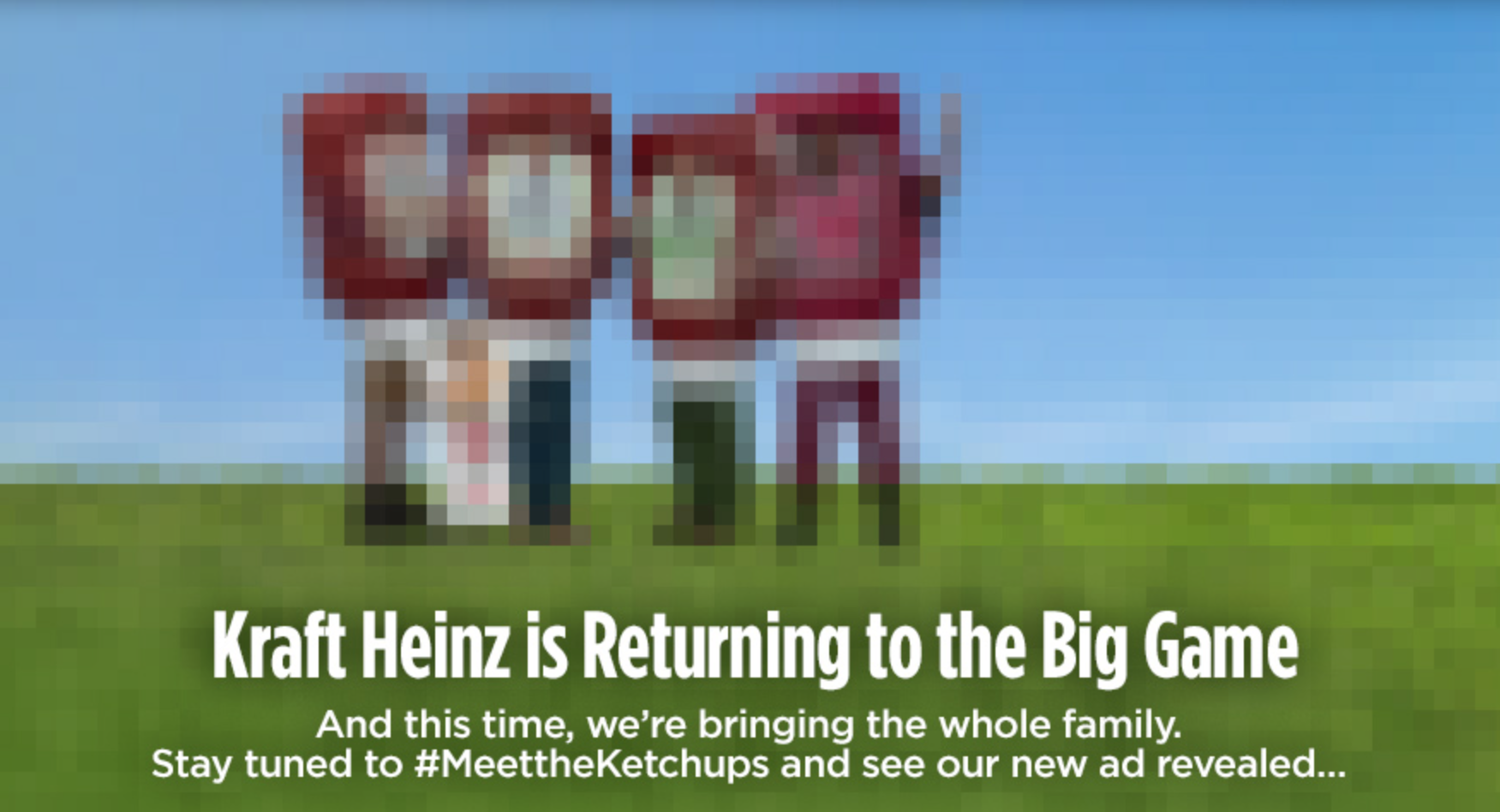 The food giant is being mysterious about its Super Bowl ad, offering just a pixellated image and this blurb.

"Everyone knows and loves the great taste of Heinz Ketchup, and we wanted to introduce the world to the rest of the great tasting family in a campaign called #MeettheKetchups."

If you can get Liam Neeson to appear in your ad, you want the world to know about it. It’s not clear what else this 15-second spot is telling us, but isn’t that the art of the teaser?

Mini is apparently using its 30 seconds of airtime (at an average cost of $5m) during the game to talk about how its car defies the labels put on it, such as ‘small’.

A complicated idea to get across, perhaps why the brand has also produced a series of six online films featuring famous people talking how they have defied their labels and how Mini is like them.

On 25 January the soft-drink brand released a short video showing a half-baby, half-monkey creature in a bouncer looking at its watch. The link with the Super Bowl is in the soundtrack and in the date on the end-frame.

Pepsi sponsors the famous Halftime Show during the game, and it was announced on 3 December that Coldplay would perform.

On 11 January Pepsi kicked off an online video series taking a look behind the scenes of the preparation for the show, called ‘The Pepsi Halftime Show Show’.

Persil announced it was making its debut in the Super Bowl on 26 January. While UK readers will know the detergent as a Unilever brand, the US version was launched last year by German manufacturer Henkel.

Persil said its game-day spot would feature a stain-fighting super hero, The Professional, who features in a "prologue" to the spot that was released along with 26 January announcement.

The game franchise has landed a Super Bowl slot to celebrate its 20th anniversary this year, and it is the first brand to go public with its final ad.

On 25 January it released an extended 60-second cut of what will be cut down to a 30-second TV spot.


It looks set to pay off with plenty of exposure, judging by the early plaudits and the 2.4 million views in its first 24 hours.

Shock Top, a craft beer brand (owned by AB InBev like all the beer brands advertising in the Super Bowl), is making its debut with a 30-second ad.

Its teaser comes in at three times that length and shows brand spokesman, comedian TJ Miller, talking to camera about how he is shooting "an unfiltered commercial for an unfiltered beer" that will be "the greatest Super Bowl commercial of all time".

He is interrupted by an animated version of Shock Top’s ‘Wedgehead’ brand mascot, and to be honest the ad goes downhill from there.

After launching a teaser GIF with a bare hint of the things to come, seasoned Super Bowl advertiser Skittles has revealed an ad starring Aerosmith's Steven Tyler in its entirety.

In it the flamboyant frontman is presented with an animated ‘Skittles portrait’ of himself. He is unimpressed, demanding that the Skittles-Tyler sing higher and higher, which is does before exploding into a shower of multicoloured sweets.

The Mars-owned chocolate bar looks to be continuing its 'You're not you when you're hungry' work with this teaser, published on 26 January.

It shows what seems to be Marilyn Monroe singing 'Happy Birthday' to the Super Bowl in its 50th year, but she's not quite on song.

The fast food joint also came over all mysterious by publishing a redacted press release, a month before the game, that hints at the launch of a new product. 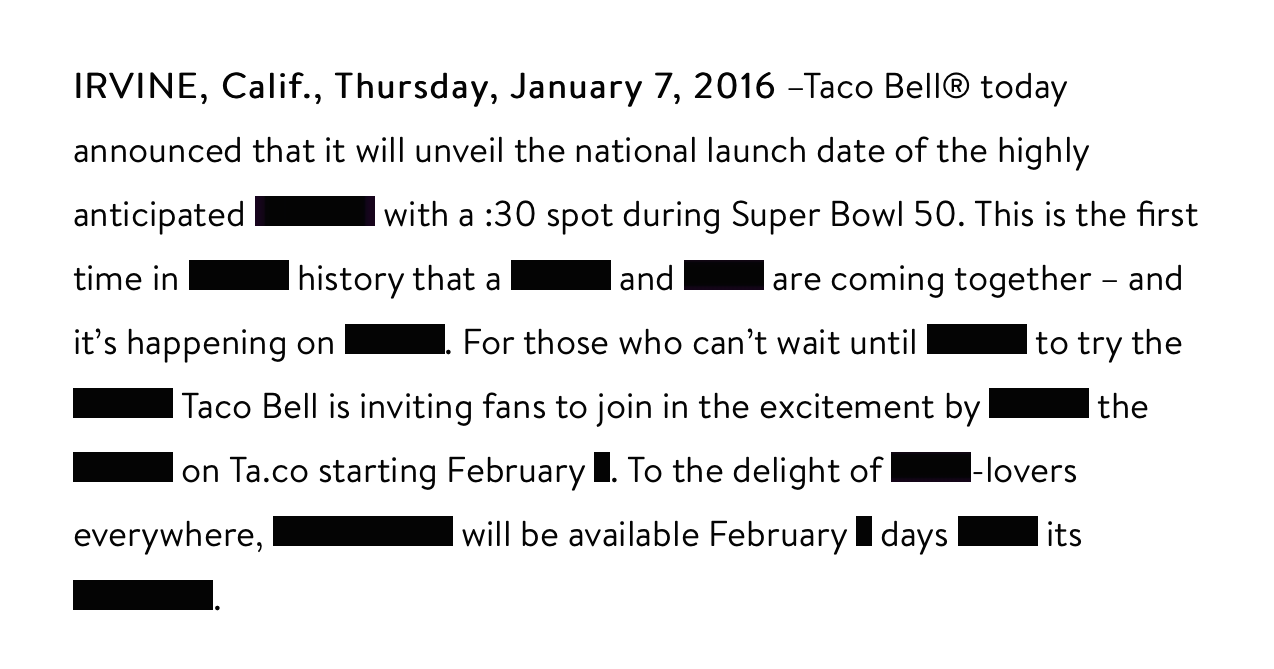 The website hosting and design provider is wrapping its Super Bowl work inside a global marketing tie-up with the forthcoming Dreamworks film ‘Kung Fu Panda 3’.

From 13 January characters from the film started appearing in a Wix video and social media campaign promoting its StartStunning.com website.


Wix said this was one of four teaser ads it would reveal by 27 January and it would release its official Super Bowl ad on 4 February.

Omer Shai, the chief marketing officer at Wix.com, said: "Last year, 115m viewers tuned in to watch the Super Bowl, but our campaign enabled us to engage with an additional audience of 300m people worldwide. Our goal for this year is to recreate that reach and hopefully surpass it."

Toyota turns up the metal for Prius Super Bowl ad

Why can't brands make every ad a 'Super Bowl ad'?