D&AD chief operating officer Dara Lynch interviews the 2021 black Pencil winners about how they made their award-winning campaigns.

In last week’s D&AD virtual ceremony, the organisation awarded three black Pencils, its highest accolade. While diverse in their subject matter and execution, the three winners were unified by a continual thread: using creative thinking to provoke important but difficult conversations about social issues.

From empowering black Americans to use their right to vote, to challenging stigma around menstruation and fighting for trans and non-binary equality, the 2021 black Pencil winners embody the power of creativity as an agent of change. The fact that D&AD chose these three winners is no surprise, as the organisation has always platformed the creatives who are shaping the future.

But what does it take to produce black Pencil-worthy work during a year of immense upheaval for the creative sector? D&AD’s chief operating officer Dara Lynch sat down with this year’s three winners to unpick what inspired their work and how it came to life, shining a light on how to win one of the industry’s most coveted awards while living through a pandemic.

"Boards of change" by FCB Chicago 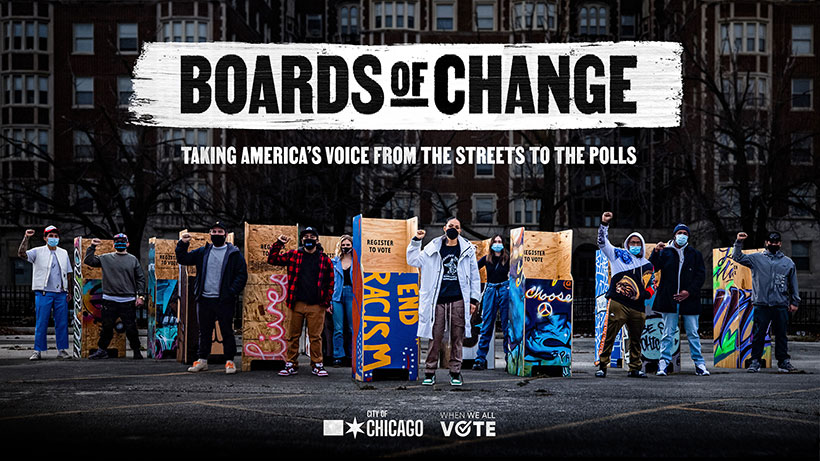 Empowering black Americans to use their right to vote by turning plywood boards used to barricade storefronts during the Black Lives Matter protests into polling booths.

In light of the Black Lives Matter movement, what inspired you to use spatial design to empower black Americans to use their right to vote?

The murder of George Floyd reignited the Black Lives Matter movement. In the streets, we saw how the despair, the frustration and the calls for change expressed themselves in an unprecedented way. We wanted to help turn this pain into hope, and eventually into change, right on those same streets.

We believed it was crucial to be as respectful and authentic to the BLM movement and the AA community as possible. One of the first steps was to collect the boards that were up on windows and storefronts in the streets. We connected with the store owners and then each of the people who created those raw messages of hope, anger and desire. That way we were able to gather around 150 boards from all corners of the city.

Just like with every project in the past 12 months, the pandemic added another layer of complexity. Taking the booths to all these different locations was one of the biggest challenges. But we were determined to help drive change. And after carefully evaluating the best way to execute the idea, we were able to pull it off while taking the necessary precautions.

What was the impact of occupying public spaces?

When people encountered the booths, they were clearly moved. You could see it in their eyes. Those plywood boards, what they stood for, the unheard voices that were speaking through them – it’s all very emotionally charged. The AA community desperately needed to be heard. And the booths helped to amplify its voice and to create change through the power of its vote. To see that kind of impact is very rewarding.

Who created and constructed the voting booths?

The design of the booths was done by the creative team at FCB Chicago. To construct the booths, we partnered closely with Chicago-based maker and craftsman Bobby Hughes of FLO Creative.

The initiative itself was emotionally intense and so was the process. It reminded us that we can all play a role in creating meaningful change. As a creative industry. As individuals. It is time to act.

"#WombStories" by AMV BBDO, which was also named D&AD’s Advertising Agency of the Year 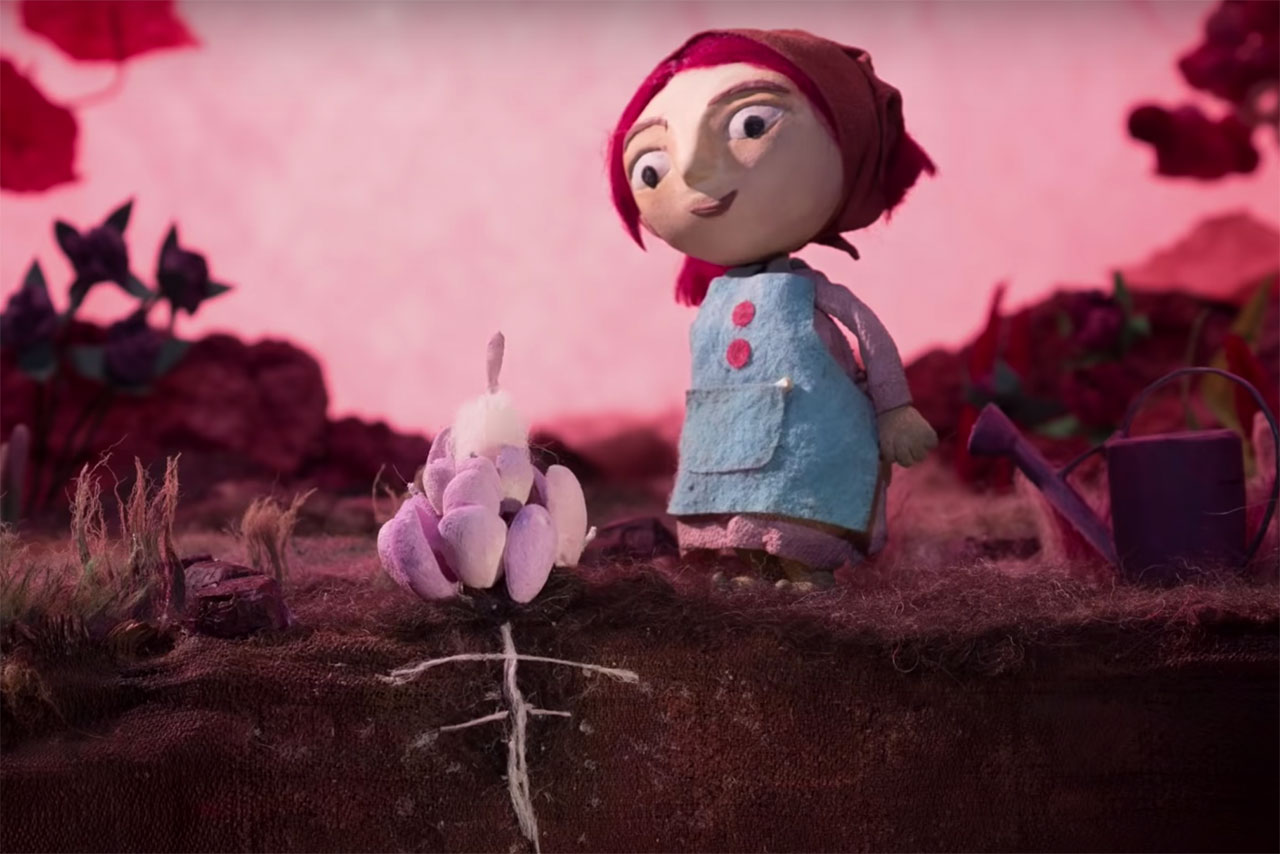 Women animators from across the world came together to open up the many narratives and break taboos around the experiences of people with wombs.

What inspired you to challenge stigmas and taboos around the experiences of people with wombs?

Bodyform is on a truth-telling journey against period taboos. On our quest to find a universal insight, we realised we’d have to resist the temptation to simplify. Oversimplification is exactly what society and culture has been guilty of doing for years: serving up the same generic narrative of womanhood, disconnected from any emotional nuances, both hiding and suppressing every experience, with devastating consequences. So instead of telling, we asked women how they felt.

We developed six interweaving storylines after hearing the most different life-altering stories. And worked on imagining evocative womb worlds and their womb dwellers. Their personalities, quirks and visual surroundings, and a world that housed all the experiences, inspired by macro photography. Working with an all-female group of animators, we wanted to build a rich new visual language and an explosion of evocative, organic textures that would allow us to represent these unseen experiences.

Luckily, we had already shot the live action and were pretty far down the briefing and production process of the animators bringing everything to life, which made things a tiny bit easier. Nisha Ganatra, the film director, was already working remotely from LA with us and Elise Butt, our editor, as well as the Framestore team.

We wanted to reflect and acknowledge all the nuances linked to life stages, intersectionality and the coexistence of feelings, so mixing styles seemed the best way to approach a multitude of womb stories, no one experiencing the same as the other. We wanted to think of the womb as an emotional place full of stories – not just functional or logical biology. To allow everything to have a sense of the organic, the handmade or the emotional space to it.

Never hide from complexity. Clinical data can be reimagined if you ask the right questions. Collaboration is still the most thrilling and rewarding way to work. 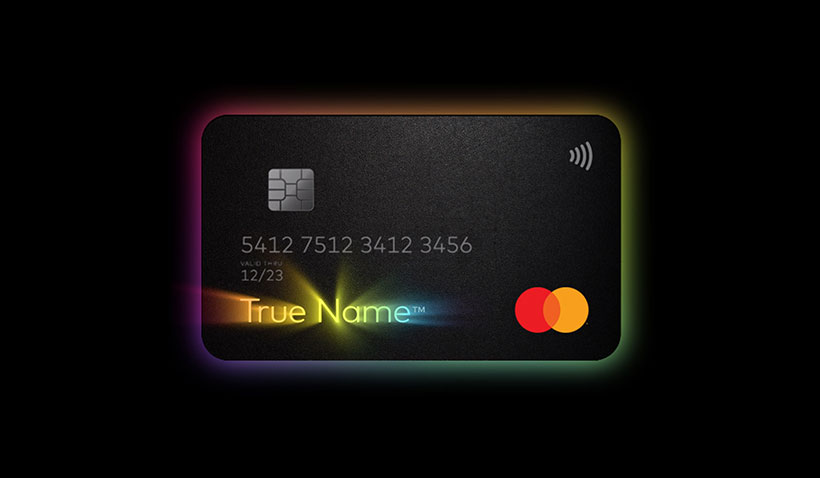 A collaboration with Mastercard to support the rights of transgender and non-binary people to use their chosen names on credit cards.

What inspired you to create a campaign that fights for the inclusion of transgender and non-binary people?

At Mastercard we are continually working to understand how our products and solutions can best serve the people who use them. The inspiration for our True Name programme came from a research insight that revealed that the use of a person’s legal name on our card products was causing a significant pain point for transgender and non-binary individuals. We heard first hand from a creative director at McCann, who was in transition, how this pain point affected him personally.

Lucas ordered lunch at a local deli and, once his order was in, he realised the person behind the counter was calling out the order pick-up according to the name on the card. In Lucas’ case, this was his legal name and not his chosen name, and he realised he could be outed in the crowded deli. When we heard this story, we realised that his experience wasn’t singular, and something had to be done to protect transgender and non-binary people when using their cards. So, in this case, the product innovation was the idea, and the campaign was a means of driving awareness and calling the industry to action.

With the insight in hand, we began the work to understand the steps necessary to ensure that people have the opportunity to use their chosen name on our card offerings. We wanted to ensure that the transgender and non-binary community, in particular, could carry our cards with pride.

Fortunately, we had already taken a number of steps toward enabling this, including removing requirements for signature at the point of sale and even removing the signature panel on cards.

The next step was to convince our issuers to come along with us and change their processes for acquisition to enable people to use their preferred name on their cards and to be addressed as such when engaging with customer service – treating them with the respect and dignity they deserve.

The launch campaign truly served as our industry call to action, a call we’ll continue until the feature is ubiquitous across all cards across the world. Critical to the effort was how we launched – during Pride month we created Acceptance Street, where we added all the designations of the LGBTQIA+ community to the Gay Street sign, right where the Stonewall Riots started. This sign of inclusion and the launch of True Name products combined to drive a 19:1 earned-to-paid media ratio.

The "True Name" spot, which ran on the Pride broadcast during the pandemic, was actually the last shoot McCann did before everything was shut down. It was shot by Bryan Buckley and Hungryman in LA and, during the shoot, we were told the New York office was shutting down. So the edit, the outreach and much of the planning was all done remotely. This was indeed a challenge but, at the same time, it allowed us to work fluidly over distance.

A great example of this is the recent film that announced True Name’s release in the Netherlands. We were able to talk openly with the local team about how its launch was executed in a way that we never would have done before this all started.

Why was it important to include the voices of actual transgender and non-binary people in your film and campaign?

It has always been about authenticity. It wasn’t just important, it was essential. This is a real human experience and it can only be told by the people who have lived and are living it. And getting to know these people was a gift; their courage to live their truth in the face of deep misunderstanding and hate is something we can all learn from.

What stylistics/design elements did you use to elevate the narrative of inclusion?

We took particular care in designing how the True Name appears on the card. In our films, we used a multicoloured effect and a rolling cymbal flare to try to communicate the power and magic that a name holds, and to show how something many of us take for granted has deep meaning and significance. This was complimented by Acceptance Street. By taking the Gay Street sign and building it out to acknowledge the entirety of the community, we wanted to send a clear message that acceptance and acknowledgment matter.

The most important lesson is that inclusion is not just a box for employers to check but a rich and vital resource that makes us and our work stronger. It means that people who have lived different experiences bring all the wealth of these experiences and their perspectives to the table. We can all teach each other things that we might never have seen or learned on our own.

The teams at Mastercard and McCann were resilient in making sure this came to market and now we continue to push as True Name scales globally. The sense of pride all of our employees have around True Name is special and the difference we are making in people’s lives… that is truly priceless.