Ian Graham, a partner at Kingston Smith W1, reflects on the past year's performance of the industry's leading agencies, as measured by the company's latest survey.

The findings from our latest review of the top 50 advertising agencies are not surprising. There is a broad range of financial performance within the sector that is reflective of the exciting possibilities for those agencies with a clear and compelling client offer, and equally reflective of the financial struggle of those failing to adapt to the changing market quickly enough.

Gross income across the top 50 grew by 3 per cent this year (6 per cent reported last year). Although positive, this was broadly in line with UK economic growth, highlighting that spend on marketing services is still being controlled as companies remain cautious, often favouring short-term cost-cutting over increased advertising budgets to drive profits. The average operating margin across the agencies surveyed improved to 11.2 per cent compared with 10.7 per cent last year (the sector’s worst margin for nine years). Despite the improvement, this is still some way behind our target of at least 15 per cent, with the main issues for agencies being the ability to negotiate fees that reflect the services delivered and management of staff costs. Given that the market remains competitive, with an increasing shortage of affordable talent, margins are unlikely to improve significantly in the short term.

Over the past seven years, we have seen a continual increase in the gross income that the top 50 advertising agencies are spending on staff; wage pressures, along with a talent shortage, have driven up costs at a faster rate than revenue growth. It is therefore slightly surprising that, this year, the average employment costs to gross income ratio improved to 60 per cent from 60.3 per cent last year.

The number of staff employed across the top 50 increased by 6 per cent this year; however, more importantly, staff costs rose by only 3 per cent. This suggests that the mix of staff taken on by agencies is changing, with an increasing number of junior employees, perhaps due to the growing importance of digital skills. Although the top 50 seem to be controlling costs for now, the talent shortage is not expected to improve in the short term and, with this, agencies will have to find ways to retain and attract young talent. Agencies that continue to thrive will be those that incentivise and retain top talent.

Arguably the most important performance indicator is operating profit per head, as it measures both the productivity and profitability of a business and gives us a good overall sense of the financial success of the sector. This year, on average, the top 50 reported £12,067 operating profit per head, which is still some way off our benchmark target of £15,000; however, it’s a slight improvement on last year’s £11,836.

While the results for top 50 are broadly in line with expectations, the advertising sector continues to come up against challenges both internally and externally that make excellent financial performance difficult. Staff costs are being controlled despite rising pressures and margins have improved slightly, but agencies are still finding it difficult to convert client spend into bottom-line profits. Despite economic conditions improving, clients continue to demand more for their money and with a shorter commitment to their agencies. It feels like 2016 is going to be more of the same, with control over staff costs in the rapidly evolving digital space remaining central to performance. 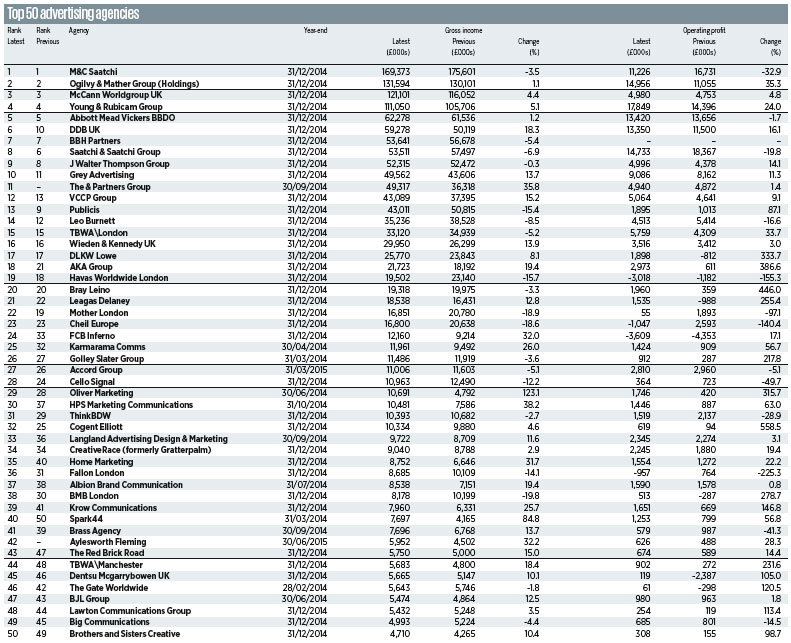 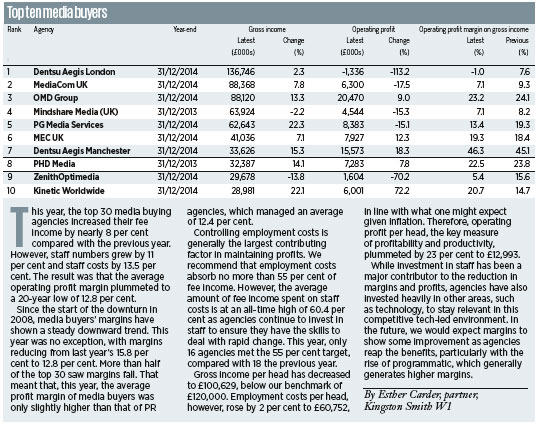 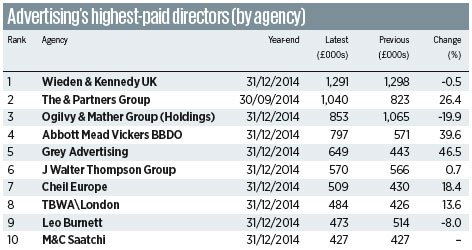 The survey is available to purchase at a cost of £295 in either hard copy or online formats. For more information or to order a copy, contact Edwina Scott at escott@kingstonsmithw1.co.uk