Tesco has failed to get a press ad from rival Asda banned, as the tit-for-tat battle between the two supermarkets over pricing shows no signs of abating.

The dispute between the two supermarket giants centred on a price-guarantee ad taken out by Asda across the national press.

The ad stated: "ASDA Price GUARANTEE We mean it! 10% cheaper or we'll give you the difference. Guaranteed on your comparable grocery shopping versus Tesco, Morrison's & Sainsbury's."

The small print at the bottom of the ad stated: "ASDA price guarantee includes comparable grocery shopping only. Comparison made against Tesco, Sainsbury's and Morrisons only. Your shopping must consist of a minimum of 8 different grocery products of which at least 1 must be comparable…"

The Advertising Standards Agency (ASA) received the complaint in March. The ads, which were created in-house, ran earlier in the year.

Tesco challenged whether the claim, "10% cheaper or we'll give you the difference. Guaranteed", was misleading, because it believed it implied Asda was always 10% cheaper than the named competitors.

In its defence, Asda said it did not believe its claim, "10% cheaper or we'll give you the difference. Guaranteed", was a "lowest price claim".

Asda argued the ad did not imply that Asda guaranteed to be 10% cheaper, but, specifically, it guaranteed to give customers the difference on comparable grocery shopping if it was not 10% cheaper.

Asda stated that its inclusion of  "guaranteed" in this context clarified rather than contradicted the meaning of the price promise. It supported its argument by saying it had received copy advice on the use of the word "guaranteed" before publishing the ad.

The advertising watchdog ruled in Asda's favour. It ruled that consumers would understand the word "guaranteed" in this context to mean that Asda guaranteed to refund the difference if it was not 10% cheaper.

The ASA said: "We did not consider ‘Guaranteed’ implied prices at Asda were guaranteed to be 10% cheaper all the time. We therefore concluded the ad was not misleading."

In April this year, Tesco withdrew its pledge to pay customers double the difference between its prices and Asda's. 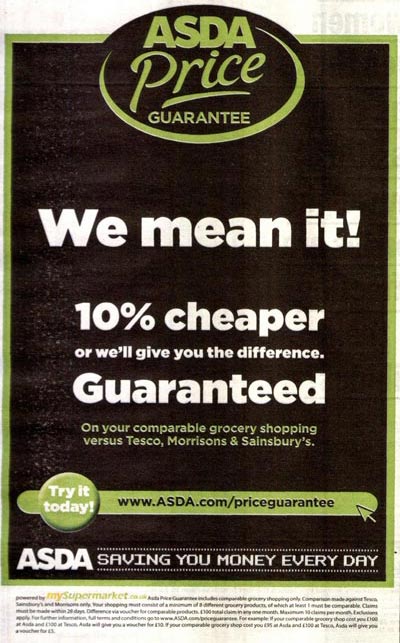 Tesco's Higginson to retire after 32 years with retailer