Using #TogetherAgainstHate, TfL wants to encourage the reporting of incidents on the network.

TfL has launched a campaign that aims to galvanise the public to take an active stance against hate crime across the transport network.

Created by VCCP, VCCP CX and Wavemaker, "Serious worrying incidents" launched via a digital display across Pink News, as a cover-wrap on Metro and on Facebook and Instagram stories.

It is part of a larger campaign that looks to tackle all incidents on the transport network, including staff abuse and drunken aggression. 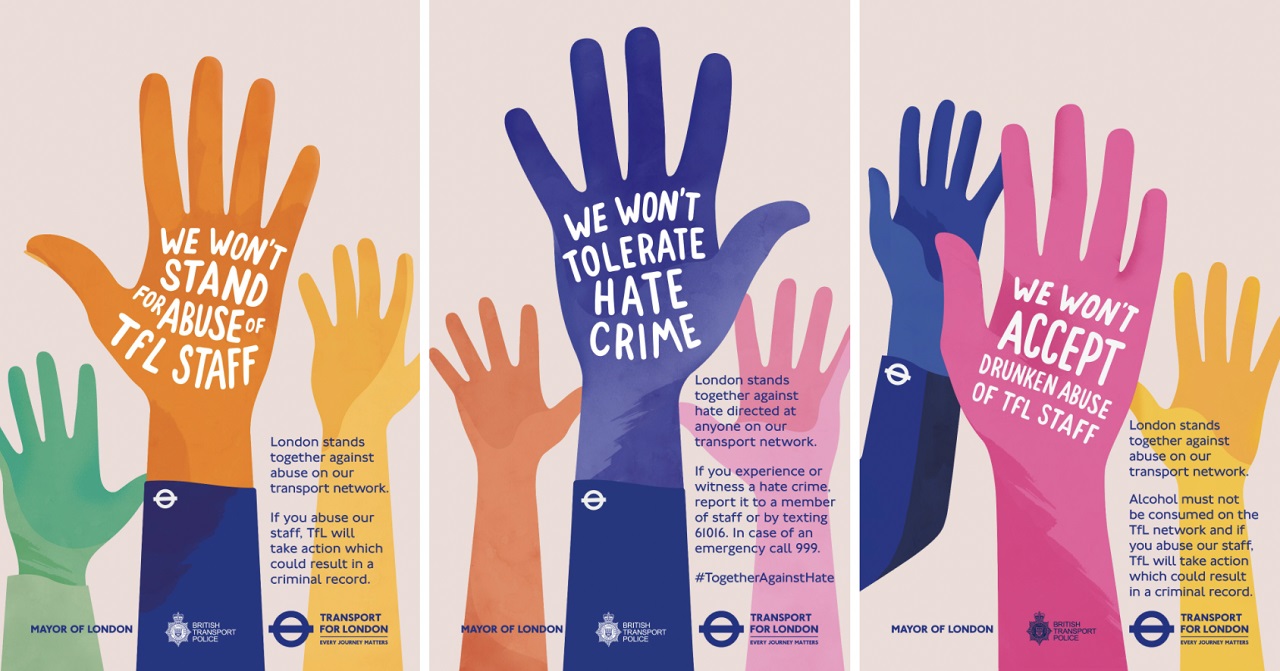 Calling on customers to use #TogetherAgainstHate, TfL hopes to encourage the reporting of incidents and encourage solidarity. Using the hashtag will highlight the lived experiences of people from ethnic minorities as well as LGBT+ and disabled commuters.

The creative is made up of distinctive illustrated hands, which will be displayed across the TfL network and social media platforms, through gifs and Instagram effects, alongside digital OOH executions – all created by VCCP CX. The illustrations feature the TfL logo in their design, and their visibility is intended to encourage commuters to take part in the drive and respond in a proactive manner against incidents.

TfL is creating a blog and social films, featuring staff sharing their own personal stories of hate crimes across London’s transport network. Hosts from influential podcasts, such as Dane Baptiste Questions Everything, Too Peas in a Podcast, HipHop Saved My Life, A Gay and A Non Gay, and Intelligence Squared, will share their own experiences. Running in parallel, an influencer partnership programme will feature personal stories of hate crime posted on Instagram.

In addition, there will be a collaboration with media partner Pink News to host three bespoke editorial content pieces on its site and promote them on its owned social channels. The content focuses on how three individuals have been subjected to hate crime on public transport in London – sharing their stories of what happened to them, how it made them feel and, most importantly, encouraging others to take action if it happens to them or they witness it happening.

The Wavemaker team was tasked with the planning and implementation of a media and content strategy and, in partnership with INCA, to produce and distribute creative content. The campaign uses personal storytelling from a diverse range of voices across various media channels – traditional, owned and social media.

Miranda Leedham, head of customer marketing and behaviour change at TfL, said: “We're doing everything we can to stamp out all forms of hate crime to ensure our transport network remains a safe and welcoming place for everyone. Our new campaign sets out our stance and invites fellow Londoners to join the conversation.”

Caroline Rawlings, associate creative director at VCCP, said: “It’s a shame that this campaign needs to exist at all, as we know that so many Londoners are categorically against hate crime. It’s for this reason that we chose to fill the network, city and social with hundreds of hands raised in solidarity. We hope that this feeling of people in every corner of the city standing together against hate will help victims and witnesses of hate crime to report it and those who commit it to stop. Because London and TfL agree that hate crime has no place on our transport network.”

To report incidents of hate crime on buses, Londoners are reminded and encouraged to call the Metropolitan Police on 101, and for Tube or rail services, text the British Transport Police on 61016. And in an emergency, always call 999.