Ja Rule was conned, as was Kendall Jenner, supermodels and an army of 400 Insta stars. What does the Fyre Festival fail tell us about influencer marketing?

It was supposed to be "bigger than Coachella", the most exclusive party ever assembled on a deserted exotic Bahamas island and that moment when the perfectly curated world of Instagram actually came to life:

Blink 182 was a headliner (we know), Ja Rule was "Livin' it Up", you could spend time on a yacht with Pepsi star Kendall Jenner for a princely fee, and beachfront luxury villas were the go-to form of accommodation on an island so exclusive that Pablo Escobar’s family owned it, or so we were told (against the dead drug baron’s family’s wishes).

That’s the dream thousands of well-heeled festival-goers were sold by some of the world’s top supermodels and a small army of Instagram influencers in one of the most successful influencer campaigns ever conceived.

Except, none of it was true.

The event was less "Caribbean Coachella" and more Lord of the Flies on an undeveloped patch of land nowhere near a private island with soaking wet natural disaster tents (the irony is never lost), no live music, droopy sandwiches, mounds of rubbish and angry local Bahamians, who were owed a truck load of money (and the promise of a lewd sexual misadventure) by rich Westerners after weeks of hard labour to get this non-event off the ground.

The dinner that @fyrefestival promised us was catered by Steven Starr is literally bread, cheese, and salad with dressing. #fyrefestival pic.twitter.com/I8d0UlSNbd

It was run by now jailed fraudster Billy McFarland (pictured below, right next to Ja Rule), who is surely the rent-a-yacht version of Frank Abagnale from Catch Me if You Can. 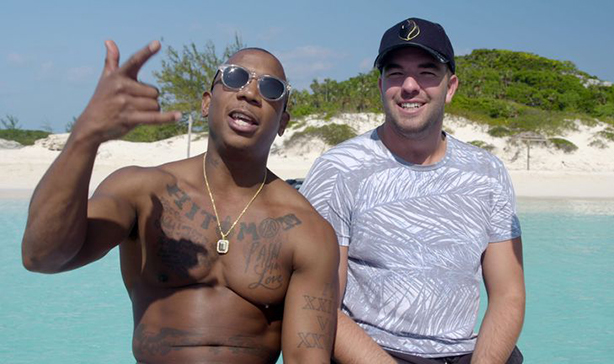 The Netflix documentary Fyre: The Greatest Party that Never Happened exposes this farce in all its cringeworthy glory. Hulu’s version, Fyre Fraud, is a much more appropriately named version.

Aside from sniggering at well-off young people, who were drawn to the festival by paid models and a Pantone 021 image on their Insta feeds, the documentary tells the tale of the power of influencer marketing, as well as its many fallacies.

These include zero transparency and accountability for an event that had never previously existed, as well as no rules to help people decipher whether an island full of Insta models and Ja Rule is fact or fiction.

In the aftermath, several of the influencers involved in the promotion have been sued. One, model Bella Hadid, apologised.

We asked industry experts what these documentaries teach us about influencer marketing.

"Using influencers to promote an event that was ultimately to launch an influencer-booking app makes a lot of sense. There isn’t anything new in that approach: the orange square was everywhere, and the festival sold out. It’s really the only bit that did work, which is part of the problem. Should influencers or creators who make money from partnering with brands be aware of the regulations and be honest with audiences? Absolutely. Ideally, they should be well versed in what it is they’re promoting or partnering with. In this case, there was very little transparency around what they were actually being asked to promote, but if they were a little clearer about the endorsement it may have avoided implications once it all went tits up. In this case it was more likely bad judgement and naivety rather than a deliberate attempt to trick audiences, but that isn’t to say there isn’t a responsibility to make sure that research is being done up front."

"Should influencers, when they know something to be a falsehood, retract their support for the product? In this case, I’d argue ‘yes’. Nothing dies on the internet. We’ve seen that with Trump’s tweets being dragged up to counter arguments he’s making today. You can’t expect your past digital actions, even if they’ve been deleted, to stay hidden amid controversy. Therefore, the moment an influencer knows they are misleading people they have the responsibility to tell the truth. If not for their followers, but for their own reputations. However, we need to bear in mind the balance between supporting fact and supporting rumour. One thing that’s clear about Fyre Festival is that the organisers were masters at deception, masters at convincing everyone that they were going to pull it off. Until it was abundantly clear that Fyre was going to be a disaster it’d be amiss for any of the influencers to back rumours they couldn’t substantiate. Once the truth was known – that’s when silence can be more damaging than saying something."

"The Netflix documentary has done an excellent job of educating the public about the dire consequences of acting on shallow promotions peddled by influencers – the majority of whom will say pretty much anything for money. Thought leadership is meant to be about expertise and credibility, but the current state of play is anything but. It’s a racket. Who's really being influenced here? The answer I suspect is ‘the vulnerable’ and ‘the gullible’ and as such, the influencer industry is on target for implosion. The Fyre debacle further emphasises the desperate need for regulation, especially when it comes to flagging promoted content. Thankfully, in the short term, the huge media backlash on all the involved influencers will hopefully deliver some instant ‘self-regulation’ while the authorities get their act together."

"Due to the nature of the career that 'influencers' have embarked upon, one of the most powerful elements to their success is the relationship they build with their audience. This begs the morality question as to whether anyone, Insta famous or not, would recommend a family member or one of their closest friends to visit somewhere that they have never been themselves. Even though some people in society often get swept up in the FOMO and excitement of gigs and festival season, it is paramount that influencers bear a responsibility to the people who have chosen to give them their time, attention and appreciation, otherwise the trust developed over years will be lost with many in an instant. In this case, there will be very few influencers who have even acknowledged their actions, which again begs the question of integrity. Radical transparency was needed, yet deception and a lack of communication resulted in one of the largest negative steamrollers across social media that our generation has ever witnessed."

"The big question is: whose responsibility is it to tell the truth? It’s a grey area, but ultimately it’s up to the paying client to feed truthful information to the influencer. If the influencer is then in doubt, it’s best for their own interests that they stay quiet rather than put themselves in a litigious position. Individual influencers aren’t usually interested in battling across their social channels with any client. It’s their shop window and as such it would obviously be detrimental to their social persona, commercial currency and future business. As the director of a crisis management and communications company myself, the handling of Fyre was farcical, dangerous and possibly the worst we’ve ever seen. It would be erroneous for the PR world to turn around and say that the responsibility for any of the situation lay at the door of any influencer. The fault was clearly the promoter and their actions in this case."

"Hearing the old folk of PR get increasingly irate about influencer marketing is like watching a Jim Davidson set at Butlins: they don’t understand how to work the VCR timer but why should they? They’re not wrong; all these youngsters doing the social media selfies are wrong. Yes, influencer marketing can often be shorthand for lazy AF comms. Yes, ‘influencers’ and their sometimes ham-fisted #ad #spon posts make easy kicking for a myriad of sneering comms pros. But when was the last time a shit survey and a tacky photo on Potters Fields resulted in millions of dollars of ticket sales? If your goal is purely transactional and you're less concerned about brand-building, then influencer marketing clearly works – it just needs better regulation. Want to put an ad on the telly? Clearcast will approve it and the ASA will investigate false claims. Similarly, it shouldn’t be incumbent for every influencer to be compelled to forensically analyse every brand that approaches them."

Yeah so my jaw has pretty much been on the floor throughout the Fyre documentary. Whole thing is outrageous

Watching #Fyre as a PR person is genuinely making me want to cry, sweat and vomit all at the same time pic.twitter.com/DBKhpFXCdV

A version of this article originally appeared on PRWeek

Advertising is in crisis, but it's not because it doesn't work

YouTube safety and the Logan Paul problem: Brands are facing an age of extremism