Martin Sorrell gets a Brazilian
The budding relationship last seen in Cannes between the Brazilian football star Ronaldo and WPP’s chief executive, Sir Martin Sorrell, is blossoming with news that the sportsman-turned-marketer is relocating to the UK to learn from the Sage of Soho. Ronaldo has promised: "I won’t leave him alone. I’ll be asking him questions the whole day, just like a striker. He’s going to have to tell me everything." WPP first invested in the footballer’s sports marketing agency 9ine in 2010 and relations are now ramping up as many clients look to Brazil ahead of the 2014 Fifa World Cup and the 2016 Olympic Games in Rio de Janeiro. 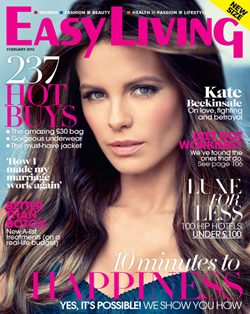 Easy Living redesign
Easy Living has launched what it calls a "tablet-sized" print edition with its February issue this week. Its publisher, Condé Nast, says the redesign (248mm x 186mm) is part of the ongoing re-energisation
of the monthly title under the editorship of Deborah Joseph. With such terminology being bandied around for the mag, how long before Easy Living announces its first app for the tablet, we wonder?

ITV makes a Splash!
OK, the jury’s still out on Splash!, but we’re hedging our bets that, after a wobbly start, this diving extravaganza starring everyone’s favourite man-boy Tom Daley will soon fall into the "so bad, it’s good" territory. The prospect of Omid Djalili coming a cropper from ten metres should be enough to offset an uninspired jury.

The Corner turns publisher
The Corner is launching Everzine, a new multiplatform magazine celebrating the mutual growing influences between Eastern and Western creativity in fashion, culture, art and design. Everzine is the result of a collaboration between The Corner and the Hong Kong-born fashion photographer Kevin Wong and builds on the start-up’s strong links with the Chinese creative and developer community. Tom Ewart, a founding partner at The Corner, said: "Traditionally, UK agencies have looked west to the US for inspiration and innovation but, in recent years, we have seen a dramatic shift in the axis of influence, both economic and cultural. We are fascinated by this shift and keen to learn from it and
be a part of it."

AND ONE THING WE DON’T…
Agreeing with Piers Morgan
Last week, the US shock jock Alex Jones managed the unthinkable when he made us begin a new year siding with Piers Morgan. An explosive live showdown between the pair on gun control following the Sandy Hook massacre unearthed the ugly underbelly of the world’s most powerful nation. Jones’ now-famous rant, in which he branded the former editor of the Daily Mirror a "redcoat foreigner" before challenging him to a boxing match, actually made Morgan look calm and considered.