You can sense it immediately. The creative team, the creative director, even the marketing manager just doesn’t 'get' the sport they are advertising, or even using in their advertising.

The work doesn’t ring true. It’s gutless, disconnected, and hugely irritating to anyone who does ‘get’ the sport.

That was always my gripe about the Guinness surfer ad. "He waits, that’s what he does." Fine.

But all that triumphant hugging and celebrating on the beach - surfers don’t do that. Especially big wave surfers. Ever.

They are often the quietest and least demonstrative human beings on the planet; a result, no doubt, of their daily diet of near-death experience. This is what footballers do. Wrong sport.

As the All Blacks said when I worked with them in New Zealand: "No dancing in the end zone." Beautifully shot ad, though.

And have you ever noticed how New Zealanders very rarely knock out a dud ad for anything rugby related?

Apart, of course, from the recent Telecom New Zealand ‘abstinence’ ad. Which I have a feeling was probably written by an ad team that had never picked up a rugby ball in anger.

That’s because everyone has the sport as close to their heart as we have our household pets.

For them, rugby is more important than life itself. Which is directly reflected in the quality of the ads.

Incidentally, pets in NZ sleep usually sleep outside in a shed and not on the family sofa. Which is probably why most of their dogfood ads are rubbish.

My theory is, it’s not enough to just be into sport. You have to be into that particular sport to make the work really sing.

I wouldn’t have the temerity to write an ad for a football brand, because I don’t get football.

I’ve played it, but never got it. It’s just not in my blood. And I know that if I did make an attempt, I’d get laughed at by Steve Stretton, my old creative partner and lifetime Coventry supporter.

In 2001, when Umbro wanted to remind people that their brand was rooted in football and not, like so many sports brands, simply jumping on the football bandwagon, they naturally turned to an agency and perhaps, even more importantly, to a creative team who proudly carry the scars of Wednesday night five-a-sides.

I know for a fact that Richard Flintham and Andy MCleod, the creative team at Fallon at the time, bleed the sport when you cut them, which is why the ads ring so true.

No OTT mock heroic shots and hyperbolic or clichéd headlines, just elegantly observed and understated ads that would touch a nerve with true footballers and maybe go completely unnoticed by everyone else.

The ads simply show silhouettes of a football boot stamped onto an orange background with lines like 'Your sister definitely hasn't got a tennis dress with this logo on it’ and 'Until golf shoes make you better at free kicks, we won't make them.'

That’s my problem with so much of the Nike advertising. It has a tendency to resort to the lowest common denominator for sport advertising - the heroic, rabble-rousing, barrel-thumping stuff - all passion and no trousers.

With obvious exceptions like this one, which is less about cycling and more about Lance Armstrong’s indomitable spirit.

Throw a rugby ball at someone and you can tell just by the way they catch it whether they’ve played.

Talk to someone who’s faking experience and knowledge of surfing and they’ll blunder into ‘kook’ speak without realising it in seconds.

Read the first few words of a press ad, or watch the opening seconds of a TV commercial and the same applies.

Only a true surfer could write Billabong’s classic and enduring strapline ‘Only a surfer knows the feeling’. 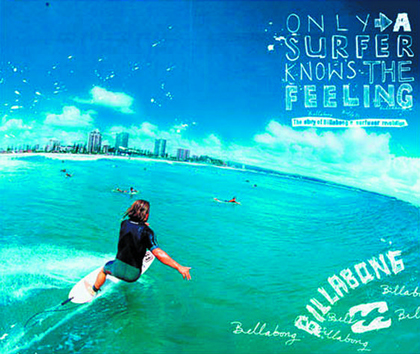 So, when we were given the chance to work on O2’s sponsorship of England rugby, we gave the brief straight to a creative team that included a writer that not only loved game but played it every weekend.

The result was the Cannes winning Stareout campaign, written by our ‘flying prop’ Kristian Foy, long time centre for the Haringey Rhinos.

The idea used an in-house developed digital technology to re-create the physical and mental confrontation involved in ‘staring out’ your opposing number on the rugby field.

It tapped into a truth about the game and perhaps could only have been conceived by someone who played the game.

Similarly, for the recent O2 Rugby World Cup work, we gave the online brief to our ‘rugby’ team Pete and Ollie.

Their wake-up call app was automatically synched to England’s games, and sent a rousing team talk to pump England supporters up for the game. It was authentic and it worked.

So my contention is that to create sport advertising that rings true, the usual ‘method acting’ isn’t enough. The people working on it have to play the sport and not just play it.

Rugby sponsorship: The calm before the scrum

Top 10 Sports Virals of all time