Technology. Get it right, you can make a blockbuster. Get it wrong, and it becomes a distraction.

The introduction of new technologies, from green screen to the latest high-definition projectors, has continually reinvented film. Get it right, you can make a blockbuster. Get it wrong, and technology becomes a distraction, breaking the spell and interrupting the story for the audience.

The same is true for brands.

New audience planning techniques and technology like artificial intelligence (AI) and machine learning are continually adding to the options marketers have to get their creative in front of the right audiences.

When applied correctly, machine learning can influence human learning and help brands grow by more effectively capturing the attention of their audiences while making the most productive use of their budget. When things go wrong, audiences have their experiences interrupted by irrelevant messages or have the sense of being pursued around the internet by brands.

At our recent annual client event, Quantcast Supernova, the audience heard from three high-profile Hollywood figures about their thoughts on the use of technology in film. Rogue One actor, Riz Ahmed, Industrial Light & Magic creative director, Ben Morris and visual effects guru, Neil Corbould, made for a fascinating panel. 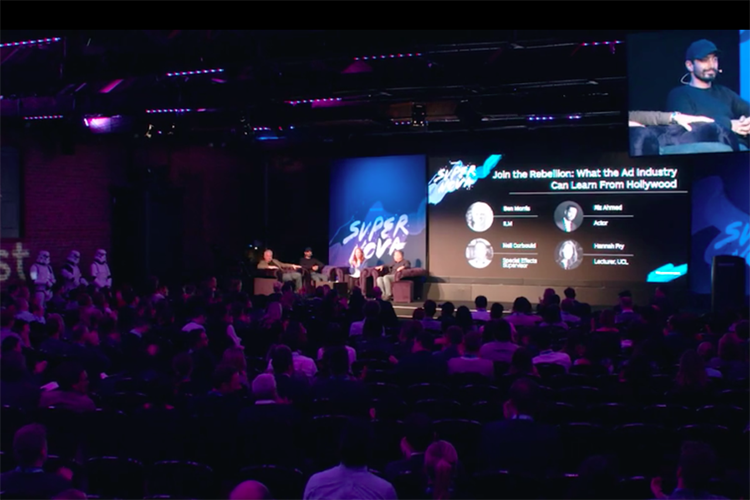 Here are three lessons that came out of their conversation:

We have all watched films where the use of special effects verges on the ridiculous and begins to take over. Things go wrong when technology is relied on to patch gaps in the script or a lack of creativity from the filmmakers. The panel discussed how some of the most impactful uses of visual effects come from enhancing real-world sets ingeniously built by special effects teams.

Used in this way, technology can help elevate the work of directors and actors as opposed to compensating for it. From making vehicles fly to turning a village into a sprawling city, the panel showed on screen how their live-action work could be expanded into a much more fantastic or larger environment.

The secret to success here is close collaboration across teams, and is a good reminder for the advertising community: technology can’t replace creativity, it can only help enhance it.

For filmmakers, working without the limitations imposed by sets and props can sound like an attractive idea. Whatever you can imagine, the computer can create. However, the trio acknowledged that today’s filmmaking environment can quickly become tricky for actors and filmmakers alike. Working without scenery and being constantly surrounded by green screen can be disorientating and create an end product which doesn’t convince audiences.

However, when the team brought in physical cues and elements of a real-world set, giving themselves reference points or focusing on practical rather than special effects, it often allowed them to come up with the best ideas and footage. Having some boundaries to contain their work meant they had to be creative in other ways, which came through in more convincing storytelling.

Likewise, the abundance of data in advertising has changed the face of creativity, but it’s sometimes easy to get lost in it. With so much data to look at, we will eventually find some that will reinforce existing beliefs or what we want to be true. Instead, marketers should be fixated on acquiring access to large, first party and live data sources that get them as close as possible to what’s going on in the real world. What they see may not please them, and it might demand more of their creativity to find the right solution, but at least they’ll know they’re not living in a fantasy.

One of the biggest talking points from the panel centred around the decision to digitally recreate the late Peter Cushing’s performance as villain Grand Moff Tarkin in Rogue One. Cushing died in 1994, but the character he played in the original Star Wars films had a key role in the new movie. Instead of bringing in a new actor, the decision was made to recreate the character through visual effects.

It was not an easy call to make. The filmmakers were concerned that a digital stand-in could damage the authenticity and audience engagement. Luckily, it worked, and the innovations made in bringing the character back to life drove some of the biggest news headlines when the movie premiered.

This led Riz to ask his colleagues on the panel whether virtual actors could eventually take over his job. The answer was no. In their view, it wouldn’t add anything to the movie experience and would take too long and be too expensive, for now at least.

There are many in our industry asking the same question about their own roles: will the robots take over? The answer is also no. Technology will certainly change some roles, particularly those focused on manual or repetitive tasks. But on the whole, it will free people up to focus on higher value and creative-led jobs; ones that robots can’t easily do.

Even with all the discussion of special effects and technology, it was Riz’s opening comments that received the biggest round of applause. He talked about how, without the nudge of one of his friends, he wouldn’t have jumped into acting and urged everyone to give young people starting out in an industry the encouragement they need to follow their passion.

All the tech and data in the world means nothing without the best talent and, as an industry, we need to continue to attract the best from all walks of life and with different experiences. Giving those people a platform to find and express their creativity is key to that.

Comparethemarket renews Disney partnership ahead of The Last Jedi release