Women use digital channels in ways that differ from male consumers. But are brands really embracing the nuances, asks Suzy Bashford.

The question of how to talk to women online is littered with pitfalls. Put a foot wrong and you might find yourself lambasted by furious females objecting to mass generalisations being made about their gender (just look at what happened when TV crafting queen Kirsty Allsopp recently suggested that "women enjoy doing household chores because it keeps them sane").

Indeed, some of this article’s interviewees took exception to the concept of "women get techie" because of the possible implication that, hitherto, females were all technophobes, but are now on "Team Geek".

The safest way to proceed, then, is to stick to the facts. Research clearly shows that women are using social media more prolifically than men and for different reasons. PR agency Porter Novelli conducted a study on the digital gender-divide (see statistics, below). It showed that women are far more interested in human interaction and checking friends’ updates regularly, while men are more likely to use social networks to display status, keep updated on the news and watch videos.

Women are often the most active in building and growing personal networks, commenting and collaborating.

However, there is no newfound love of gadgets behind this women and tech trend. In fact, the polarising word "tech" can confuse the issue. As Helen Nowicka, executive vice-president, Porter Novelli Washington DC, says: "It is quite an unhelpful word. You don’t think of a smartphone as a tech device. It’s a communications device. It would be better to use the word ‘social’ here because it’s not about the technology. It’s about the connections to other people. Technology enables women to express their natural behaviour, which generally means being the chattier, more-communicative gender, on a much bigger, global scale."

Technology has reached a tipping point where it is so easy and intuitive to use that the "average" woman – rather than solely the "tech-savvy" – is able to find her voice. According to Belinda Parmar, chief executive of Lady Geek, an agency that aims to make tech more appealing to women, this is driving a "revolution of dissatisfaction". Women, she adds, are more likely than their male counterparts to express their opinion when they dislike (as well as like) something.

Nowicka believes that the key insight from her agency’s research, which spans the US and Europe, is: "Social networks provide a new way for gender traits to come to the fore, hence women are often the most active in building and growing personal networks, commenting, collaborating and sharing."

This means brands must speak to women in a "new way", too, but the big question is: how? There are three keys to improving communications with female audiences online (the majority of which are applicable to other platforms as well). 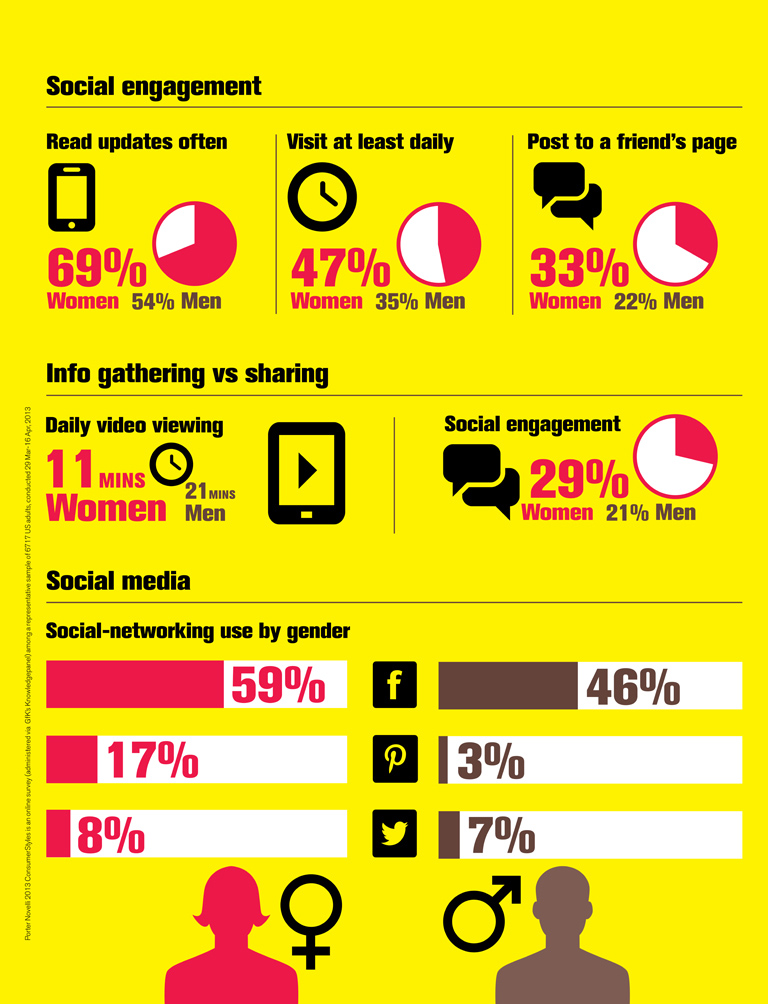 1 - Talk to women with empathy

In her forthcoming book The Empathy Revolution, Parmar identifies three cornerstones of empathy: emotion ("make me feel something"), reassurance ("make me trust you") and authenticity ("show me that you mean it"). "Whether it’s social media or a big ad campaign, brands in this era have to deliver all three," she adds.

One marketer embracing the changes that female audiences are leading online, and the need to understand them, is Stephen Taylor, vice-president, brand and retail, Samsung. He has hired Lady Geek to deliver "empathy training" to his teams because the majority of spend on tech is now accounted for by women.

If you want a masterclass on how to get the tone right for females, pick up any popular women’s magazine.

Taylor describes an empathetic conversation as one in which Samsung doesn’t just talk about the spec of a product, but looks at what the technology needs to do for the person to enhance their life, giving greater consideration to the consumer story.

However, while women may be starting the revolution, he predicts men will be "swept along" by it. "Blokes want empathy, too," he says. "Men just aren’t as vociferous about saying ‘you’re talking to me in the wrong way’. Learning about empathy will influence how we speak to men."

Social media provides a much better platform than traditional media to be empathetic, due to its ability to be nuanced and interactive. Tone is absolutely crucial.

If you want a masterclass on how to get the tone right for females, pick up any popular women’s magazine. Take Elle: it has recorded phenomenal growth over the past 18 months, boasting nearly 2m Facebook fans, 600,000 Twitter followers and 250,000 Instagram users.

What are the secrets of success? "Relevancy. Trust. Consistency. The fact that we adapt our style and context on different platforms online, but not our tone," according to Meribeth Parker, group publishing director of Elle, owned by Hearst Magazines.

Parker adds that training journalists on digital platforms, so that they are the ones in control of content across all channels, rather than tech experts, has been key. "Women have this block and underrate themselves; they think they’re not technical. But this stuff is not hard. If you can work a TV remote control, you can do social media," she says.

Turning your product pink, creating a "handbag size" or wheeling in Kate Moss to design your accessories (Carphone Warehouse) does not show you are taking women seriously. Women crave to be taken more seriously, increasingly venting their frustration when they are not.

Laura Downing, the owner of a housecleaning business, is one of 225,000 members of LinkedIn’s "Connect" professional women’s network run by global banking firm CitiGroup. When Marketing asked the group "How do you wish brands spoke to you?", she replied: "With more respect for my intelligence." She added: "I have seen so many ads that were just so stupid that I wonder whether anyone with half a brain would even consider the products."

Debbi Evans, editor of the magazine Libertine, which aims to challenge the way subjects such as technology and science are written about for women, echoes this view. She describes how she and her team – mostly "intelligent 30-something women who are very ambitious" – have "recoiled in horror" at some of the imagery they’ve been sent by advertisers. For an example, one need only look at the Twitter reaction to the depiction of women in Skoda Ireland’s "Simply Clever" campaign.

One of the most shocking things, notes Evans, is that many of these ads have come from female marketing managers "who just didn’t get it". She argues that brands that fail to become more progressive will suffer in the long term. "The recent resurgence of feminism online has really helped. Advertisers are more willing to listen, even if they’re not willing to do anything immediately," she adds.

Neuroscience posits that women are more "whole-brained". Simply put, they use both logic and emotion to make decisions.

Women’s 'whole brain' also demands that marketers engage them personally in a more rounded, rather than one-dimensional way.

"This means that women are forensic when it comes to assessing how good or bad a product is, and they will criticise or praise it against many different dimensions," says former senior ad executive Jane Cunningham, co-author, with Philippa Roberts, of The Daring Book for Boys in Business. "They might look at function and aesthetics, but they’ll also consider people-based elements such as service, after-sales and brand personality."

Campaigns, accordingly, need to convey the whole range of emotions that are aroused throughout the customer journey, rather than just focus on factual, hard information.

Women’s "whole brain" also demands that marketers engage them personally in a more rounded, rather than one-dimensional way. Mothers, for instance, often complain they are related to only in terms of their children; they want the rest of their identity to be given attention, too.

Ten years ago if you wanted to reach stay-at-home mothers or those who work part-time, you had to advertise on daytime TV. "Brands would do a dodgy ad in between Mr Muffle and Loose Women," explains Nadya Powell, managing director at social agency MRY. "Now you can reach these women on social, where they hugely over-index and are hugely active. It’s a massive door-opener. But what do brands do? They’re taking their old dodgy daytime TV ad and shoving it onto Facebook. They are completely ignoring the fact that these women are the most engaged, most interesting set of people online."

Powell argues that brands need to think "interest" first, rather than "woman", and "talk to the whole". Social media has spawned so many interest-related groups, encompassing everything from the professional to the highly personal, that creating interest-led content is much easier than it sounds.

She identifies Sainsbury’s as an example of a brand doing this well, citing its family-friendly content, which often cuts to the heart of an emotional topic and speaks to the multi-faceted parent, rather than the mum-chained-to-the-kitchen-sink.

"It’s about talking about what they’re interested in, not who they are," says Powell. Take this one step further and you have a "gender-neutral" strategy. Indeed, none other than McDonald’s is heading this way, according to its UK chief marketing officer, Alistair Macrow. As he sums it up: "We have to think beyond broad demographics [like gender] and create content that is tailored to engage individuals." 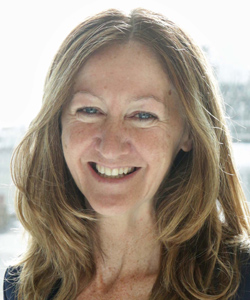 "Women want a richer experience. That’s why, this year, we plan to marry Twitter much more directly to the advertising we’re doing. We’re also focusing on tone of voice: I don’t want a brand I’m sociable with not to be the same brand in-store or on TV. Brand managers are being a bit lazy just putting traditional advertising into social media and trying to make it work. That misses what social media is all about: creating communities and bringing women together around shared values. The opportunity to understand what women want is massive. Just don’t be patronising." 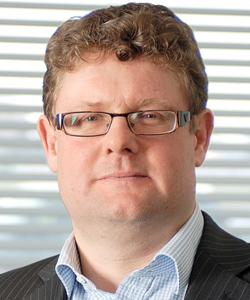 "Female consumers are becoming more savvy. They are asking more questions, and exchange of information is increasingly happening online. It’s hard to enter that conversation on social media and be relevant; you have to find genuinely useful content. With Npower, it tends to be things like energy advice – say, how much you can save by turning your boiler down a degree; it’s about being useful. We’ve all seen the horror stories of brands trying to get in the conversation, failing miserably and getting vilified. They end up looking like your dad wearing a baseball cap. It’s about being authentic. We’ve made mistakes, too; you’re having a conversation, so you will make them. But it’s untenable to avoid the conversations – you need to engage." 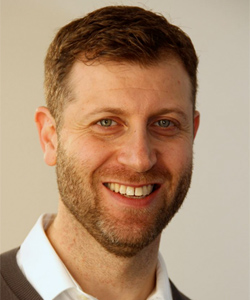 "Women embracing social is an important trend and a very positive one. Women are also owning and shaping social to better suit their needs and make their opinions heard on traditionally male-dominated networks. We are putting more resource into developing relevant content and recommending the services that will best suit their needs. The challenge is always to demonstrate empathy without becoming patronising."

'I wanna drive a plane because they go fast,' says ambitious child in LinkedIn creative

Claire Beale: From stereotypes to semantics, why gender matters