A round-up of actor Jean Claude Van Damme's most epic ads is the most-read news story of 2014 on Campaign. We look at the top 10.

This included "the baker" for GoDaddy, the web hosting company, which sees Van Damme appearing in different parts of a baker’s kitchen playing various instruments such as the maracas and bongo drums.

David Vitty, who performed as Comedy Dave on the Radio 1 Breakfast Show’ with Chris Moyles, planned to launch a production company to take on ad agencies.

In May, Campaign reported that Vitty had joined Zebra Crossing, the post-production and adaptation company. He is part of its new production company Stripey Horse, and was named the head of development.

Freeview, the free-to-air digital TV service, launched an ad featuring a cat and a budgie singing You’re All I Need To Get By by Marvin Gaye and Tammi Terrell.

The spot was created by Leo Burnett London, and saw the cat stalking its way to a budgie’s cage. Instead of trying to eat the budgie, the cat starts singing, and the budgie completes the duet.

It was written by Leo Burnett London’s Phillip Meyler and Darren Keff, and directed by Ne-O through Stink.

4. The Christmas ads you need to watch

This round-up of the Christmas ads featured major campaigns from John Lewis, Sainsbury’s, Waitrose, Asda and Debenhams. Many pulled at viewers’ heartstrings, while others offered up some comedy.

The highly anticipated John Lewis ad from Adam & Eve/DDB broke at the beginning of November and has been very popular.

The festive campaign tells the tale of a boy who can’t wait for Christmas so that he can give his penguin friend, Monty, the companion he has longed for.

Daniel Fisher handled copywriting for the ad, and Richard Brim was the art director. It was directed by Dougal Wilson through Blink. The computer generated penguin was created by MPC.

David Abbott, a co-founder of Abbott Mead Vickers BBDO and one of the industry’s most respected copywriters, died suddenly aged 75.

He founded AMV BBDO with Adrian Vickers and Peter Mead in 1977.

7. Chipotle helps the British with pronunciation in first UK campaign

Chipotle, the Mexican fast-food chain, introduced its first UK ad by helping the British in pronouncing its name.

The print ads created by Mother show images of the food the restaurant serves with instructions on how to pronounce Chipotle. 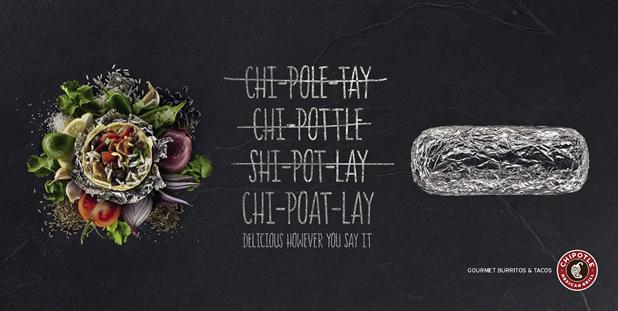 The agency teamed up with Simon Hall and Warren Moore, the veteren direct marketers, to set up a joint venture agency for BA’s direct and loyalty marketing business.

It was created and shot by Rokit’s Rohan Blair-Mangat. Studio Boulevard did the art direction for the ad.

Freeview makes it into the top ten again, but this time with its latest ad featuring unsold jumble sale items that come alive singing I Want To know What Love Is by Foreigner.

The ad was created by Leo Burnett’s Rob Tenconi and Mark Franklin. It was directed by Sam Brown through Rogue.