The North London club seeks to transform Tottenham into a sports and entertainment destination, redefining the fan experience.

Set to open in 2018, Tottenham Hotspur's new stadium will become London’s largest capacity football ground and will feature a retractable grass field with an artificial surface underneath to host a minimum of two NFL London games per year across the next decade, plus a programme of music and entertainment.

Tottenham Hotspur chairman Daniel Levy stated: "We believe our new stadium will redefine sports and entertainment experiences. We have travelled to some of the best venues in the world to ensure no stone is left unturned in order to deliver experiences that are unparalleled for all our visitors."

The name of the stadium is yet to be disclosed but the club’s executive director Donna-Maria Cullen confirmed that discussions with brands were underway: "Naming rights are now an acceptable part of stadia so that process has begun but may only be done as the stadium is closer to being finalised." The club’s current commercial partnerships are with brands including US sportswear giant Under Armour, and insurance services provider AIA Group. 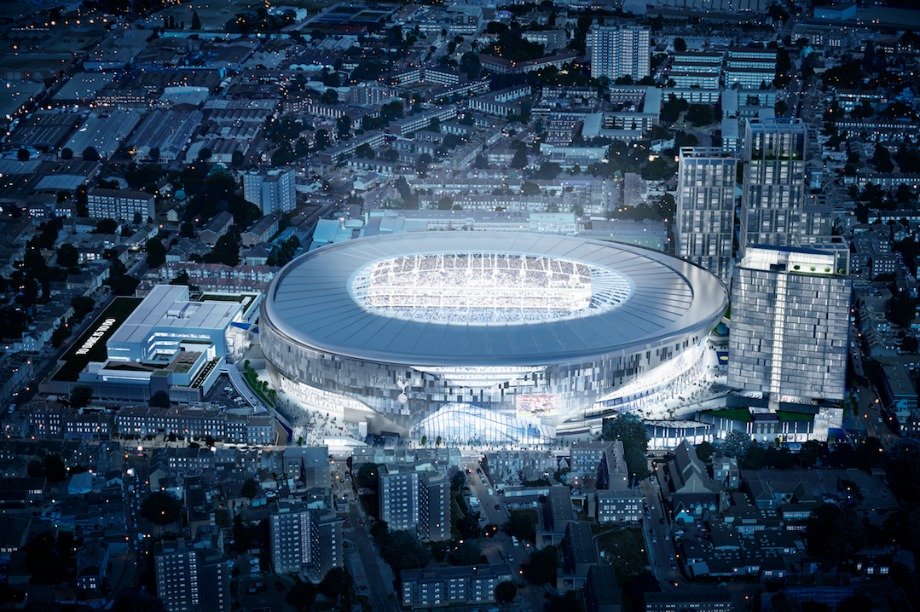 Technology at every turn

The Club has launched its new immersive preview suite at its Lilywhite House headquarters, which overlooks the stadium site, and features 360-degree VR, an Oculus Rift tour and augmented reality iPad app so guests can experience and explore the stadium and its choice of premium suites and seats prior to its completion next year.

Geo-location technology in the new stadium will enable more bespoke and personalised experiences while a connected experience is promised for all visitors. Premium guests can also enjoy state-of-the-art stadium seating with heated seats and USB ports.

A new London home for the NFL

The ten-year partnership with the NFL is forecast to bring £120m to the tri-borough area of Haringey, Enfield and Waltham Forest, while the economic impact on the London economy as a whole will be in excess of £400m during the same period. Cullen added: "We have taken two of the world’s most popular sports and brought them together. We are trying to create a destination so that when the NFL comes to town, fans spend the weekend here and spend in a part of London that needs the economic impact."

Multiple premium offerings at the stadium will include The H Club members club, where guests can dine with club legends, bespoke suites that can also be used as a London office base, loges for a semi-private experience and a panoramic Sky Lounge bar on the ninth level of the stadium.

The exclusive glass-walled lounge, The Tunnel Club, will give guests a behind-the-scenes view of the players’ tunnel as teams head from the dressing room onto the pitch, plus an area directly behind the First Team technical area to enjoy the match.

Andy O’Sullivan, director of hospitality, commented: "We wanted to create memorable experiences and be the first of a new breed of stadia. Different brands and different individuals can all come to the stadium yet have a totally bespoke experience."

More: How the NFL embraced Twickenham - Paul Southby, senior project director at Wasserman, reflects on the NFL's tenth birthday in the UK and its recent debut at Twickenham.

Sure partners with Premier League clubs to increase fan engagement

Behind the scenes: Adidas launches footwear collection in Dubai

Experiences in the age of influence

How the NFL embraced Twickenham