Thinkbox takes us through its latest research into TV and young people, revealing that they are much less ad averse than the average adult and are more likely to enjoy TV advertising.

TV is expanding at a breathtaking pace. New devices, new platforms, new commercial opportunities... these are all having an impact on our relationship with TV and now is a good time to take a close look at how these developments are affecting the younger generation.

We explored a number of key issues, including how young people aged between 10 and 24 use content and the role played by TV and other media in their lives.

We commissioned Tuned-In to examine how TV fits into young people's tech-filled lives, their attitudes to viewing and the impact TV advertising has on them.


The quantitative element of the study used a nationally representative sample of 1,000 10-24 year olds to gain a broad and comprehensive understanding of their attitude to media and the role they play in their lives.

We also deliberately recruited a representative sample of full-time students living away from home.

We added some qualitative depth by inviting survey respondents to participate in a dedicated Facebook group to discuss 4 key themes - TV, advertising, new technology and the web.

In addition to this we got Vox Pops International to conduct some interviews on the street with young people under 25 to find out what their favourite ad is at the moment and of all time.


We know from previous qualitative work that students watch a lot of TV but a significant proportion live out of the family home during term time, approximately 1.2 to 1.5 million of them.

This is an invisible audience, not counted by BARB when they are away but yet are big television viewers.

They watch on average 2.6 hours of broadcast linear TV a day and on top of that a significant proportion of on-demand content.

Fifty eight percent of our respondents claim to watch the majority of their TV via a computer, although the importance of shared viewing is strong, with 59% watching most of their TV with someone else. 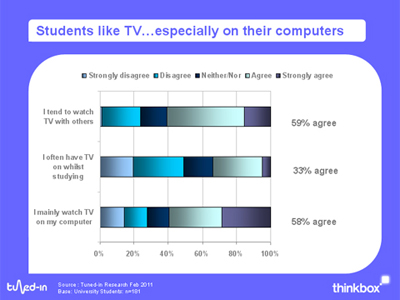 
Generation Whatever, the youth research we carried out in 2007, identified two main themes.

We looked at the technology adoption curve, when it is adopted and how they use it.  We also identified the different need states that television fulfils in their lives. 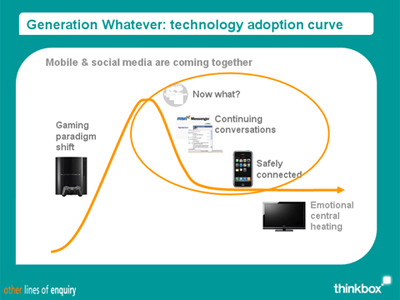 In 2007 the Nintendo Wii brought a new style of gaming which appealed to a broader age range resulting in a paradigm shift in gaming overall.

In 2011, 69% of all our respondents owned a games console and although there is a definite skew towards males there wasn’t a significant difference in age.

We also recognised that now there is a real coming together of social media, messaging and mobile with the convergence of technology such as smartphones enabling these three activities on one device at your fingertips.


This is very much their social space, more than 90% of young people use the internet to socialise with friends and over half of them use social networking sites daily.

Frequency of use increases with age, 74% of 20-24 year olds claim to socialise online at least once a day.


TV affects many aspects of young people’s lives and is still very important to them. 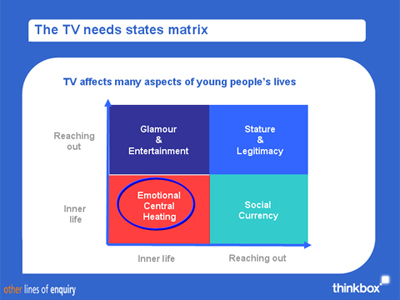 Overall, 63% of all young people agree that they love watching TV, with agreement to this statement rising the older they get.

They spend more than two hours a day watching telly, over two thirds of which is to commercial channels.

It provides them with entertainment, something to talk about, is there to relax with and ‘warms a room’ when alone.

In 2007 when we identified the needs states television fulfils for young people, emotional central heating was one of the key aspects and still is in 2011.

One of our qualitative respondents put it best when they said "When I get home from school and no-one is home two things go on first, the central heating and the telly".

It’s a part of their lives whether it’s there to keep them company (39% of our quant sample agreed with this), or there in the background while doing homework or other activities (48% do this).

Sixty three percent of 10-24 year olds also agreed that it is a great way to relax, the second best way to unwind after listening to music (67%) and when it comes to alleviating boredom 70% of young people turn on the TV.


TV brings family and friends together, with 41% agreeing this is a common social activity.

Because young people prefer watching TV with other people they will do so even if there is no-one around.

Social media has enabled people to ‘watch together’ virtually with 30% of our respondents saying they often talk to their friends online whilst watching their favourite shows.

It is this talkability that is one of TVs main USPs. TV drives more conversation than any other media, with 71% saying they often talk to their friends and family about TV programmes and 31% agreeing that they talk about the TV ads they see too. 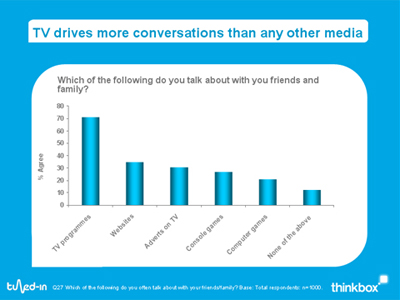 Young people are notorious multitaskers where the most common activities whilst watching TV are texting/making phone calls and using the internet.

Despite this TV still frequently gains undivided attention with 55% saying they always or often watch TV and do nothing else. 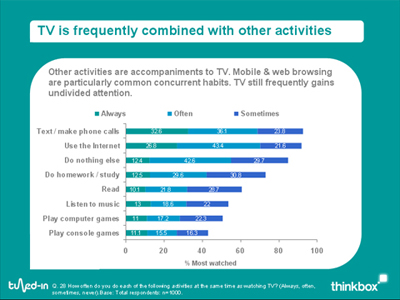 
When asked for the type of advertising which has had the greatest impact on them TV comes out on top almost every time amongst all age groups.

Overall 61% named TV as the most impactful medium with cinema coming second with just 7%. 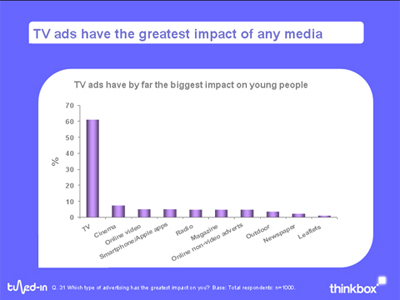 In fact when respondents were asked in the quantitative study to name their most memorable ad since 2010 and of all time, over 90% of responses cited TV ads.

Recent ads in the top 10 were for brands like Compare the Market, Cadbury and the Apple Ipad with ads for Tango and Guinness being mentioned among some of the most memorable of all time.

Young people are much less ad averse than the average adult and are more likely to enjoy TV advertising.

They are also less sceptical with 24% of our respondents claiming that they trust TV ads compared to only 14% of adults.

Young people also like to talk about TV ads with 33% saying they do this. 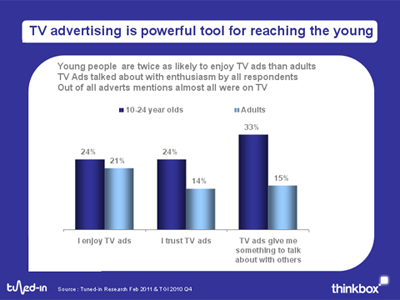 
Our last work into youth was only a few years ago yet gaming, social media and the use of smartphones have all increased in prominence giving young people more options than ever.

Despite this, our Truth about Youth work has shown that TV is continuing to play an important role in their lives and still addresses the key needs states we identified in 2007.

In addition to this, TV is still the most impactful and memorable advertising medium by far.

Appointment to view: 'The Canvas Experiment'